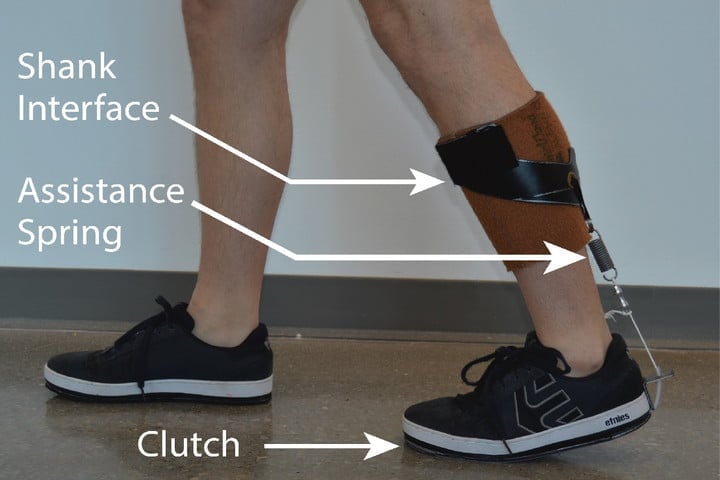 The exoskeleton, which Vanderbilt mechanical engineers describe as inexpensive and lightweight, can be concealed under clothing without impairing motion. Described by Vanderbilt engineers as an unpowered friction clutch mechanism, the exoskeleton operates without actuators or batteries and fits under the wearer’s shoe and with roughly the same thickness as a traditional shoe insole, according to the engineers.

Weighing just over one pound, the exoskeleton comes with a soft shank sleeve and an assistive spring and costs roughly under $100 to manufacture.

“In this project, we created a spring-powered exosuit — an unmotorized, soft exoskeleton — that can reduce loading on a person’s calf muscles as they ambulate,” said Professor Karl Zelik, assistant professor of mechanical engineering and senior author of the study. “The device uses a novel under-the-foot clutch mechanism that we invented, and an extension spring that acts in parallel with the user’s calf muscles. As a person walks, some of the force that typically goes through their muscles is redirected and goes through the assistive spring instead. This reduces the muscle force and effort needed to walk.”

The engineers believe that the applications for the exoskeleton are broad and include helping the elderly to stay mobile as well as assisting people who walk, run and hike for recreation. Additionally, the team envisions that the exoskeleton could help reduce fatigue for workers, like soldiers in the field and postal and warehouse workers, who are required to walk significant distances.

Zelik will present the research at the Wearable Robotics Association Conference in Phoenix, Arizona, held March 26-28. A paper detailing the research was published in IEEE Transactions on Neural Systems and Rehabilitation Engineering.

By posting a comment you confirm that you have read and accept our Posting Rules and Terms of Use.
Re: Engineers create low-profile ankle exoskeleton for the elderly, soldiers, postal workers
#1

CR4 Admin: Spam: This post was deleted because it contained advertising outside the Commercial Space forum. Please review Section 14 of the Site FAQ about advertising.