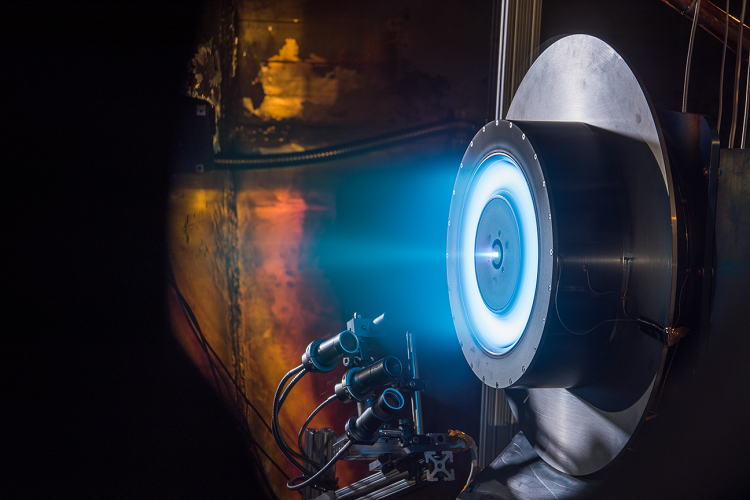 An early systems integration test was performed by Aerojet Rocketdyne for NASA’s Advanced Electric Propulsion System (AEPS) program, which includes technology that could be used on NASA’s proposed lunar-orbiting outpost in the early 2020s.

The company is under contract with NASA to develop and qualify a 13 kW Hall thruster string. The recent test focused on the power elements of the AEPS Hall thruster string, including the discharge supply unit and the power processing unit, to demonstrate the system’s ability to convert power at a high efficiency level and produce minimal waste heat.

Hall thrusters, a type of ion thruster, trap electrons in a magnetic field and use them to ionize the onboard propellant (typically xenon), accelerating them outward to produce thrust, according to NASA. These engines use 10 times less propellant than traditional chemical rockets.

The next step will be to finalize and verify the design before the critical design review, which would clear the system for production. The thruster could be used on the power and propulsion element of NASA’s proposed lunar-orbiting Gateway outpost. This element will demonstrate 50 kW-class solar electric propulsion to support exploration on and near the Moon and beyond, including Mars.

By posting a comment you confirm that you have read and accept our Posting Rules and Terms of Use.
Re: Electric Propulsion Capabilities Demonstrated for Future NASA Missions
#1

Recently it has come to light a Chinese Engineer acquired 40 GE Patents. The FBI appeared to catch this individual in 2014 yet watched him until making a public statement. While using a thumb drive he swiftly removed 19,200 files creating a National Security threat to our Energy Grid, Air Traffic Controllers, all US ports, infrastructure, & any mergers & acquisitions. His chief area of expertise was Defence, Boeing & Airospace!

Can NASA develop a system to track & remove all drones or threats if & when an attack developes?

“The pentagon confirms Russia has a submarine nuke delivery drone”

15 kW?? That's barely enough to move an electric car down the highway at 65 mph! I guess in space where there is no wind resistance, 50 kW would be sufficient for moderate acceleration of small, low mass vehicles. I find it hard to believe that it would even be enough to land on or take off from the moon.