Before diving into the details of how ion thrusters work, let’s take a step back and look at the spectrum of electric spacecraft propulsion of which ion engines are a part. 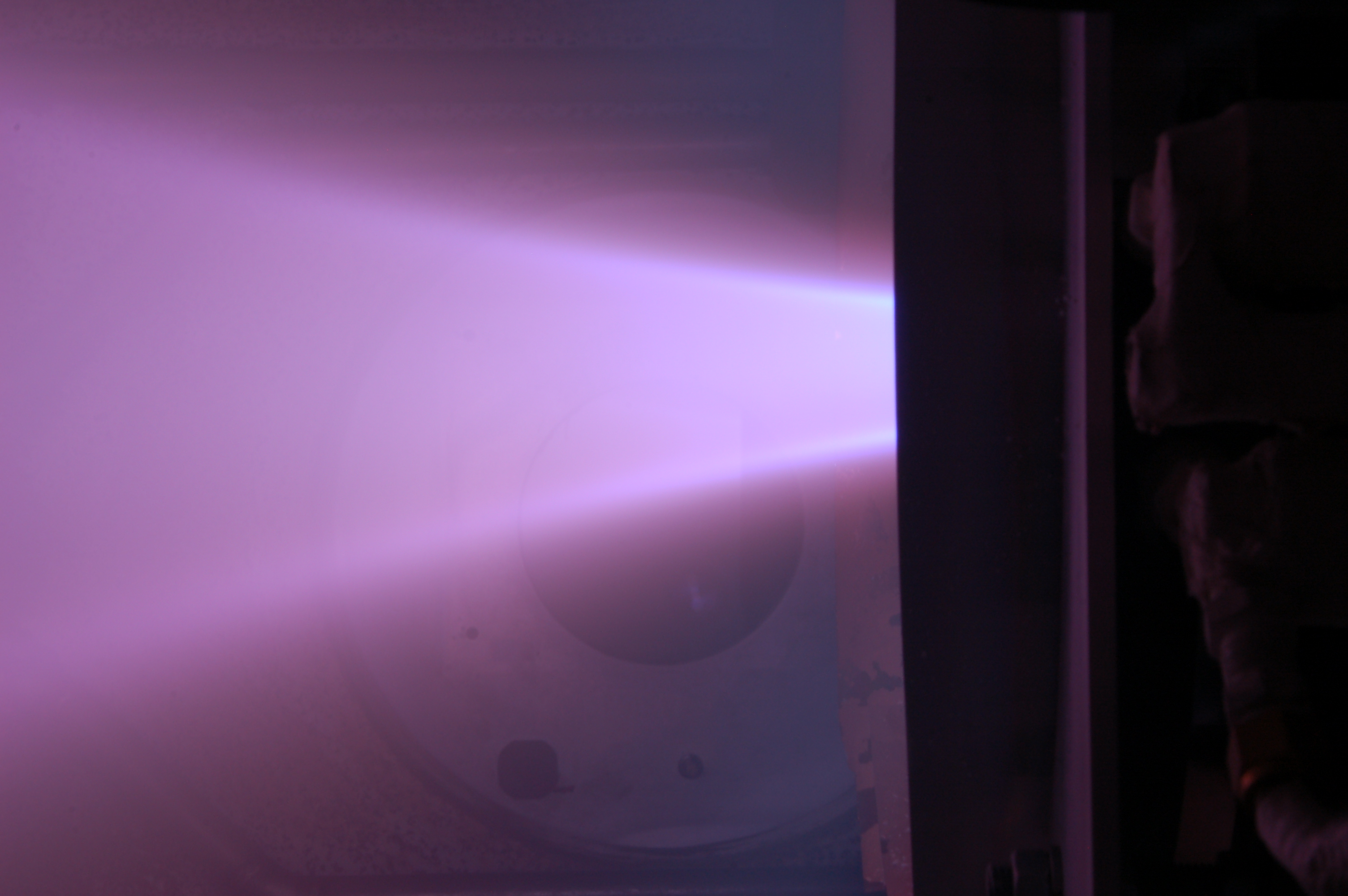 There are three main types of electric spacecraft propulsion. The first category, known as electrostatic propulsion, is characterized by ionized propellant that is accelerated through an electric field as a result of the Coulomb force. Ion thrusters of this type have powered NASA missions like Deep Space 1 and Dawn.

Lastly, in electrothermal propulsion, an uncharged propellant in gaseous form is heated by an electromagnetic field and expanded through a converging-diverging nozzle to generate thrust. Propulsive devices utilizing an electrothermal approach include resistojets and arcjets.

There are a variety of ion thruster designs, but each revolves around the central principle of generating thrust by ionizing a gas and accelerating it out of the back of the engine. Taking a look at one design in particular helps to understand how this process happens. The NSTAR thruster flown aboard Deep Space 1 and Dawn is a type of ion engine known as a gridded electrostatic ion thruster. 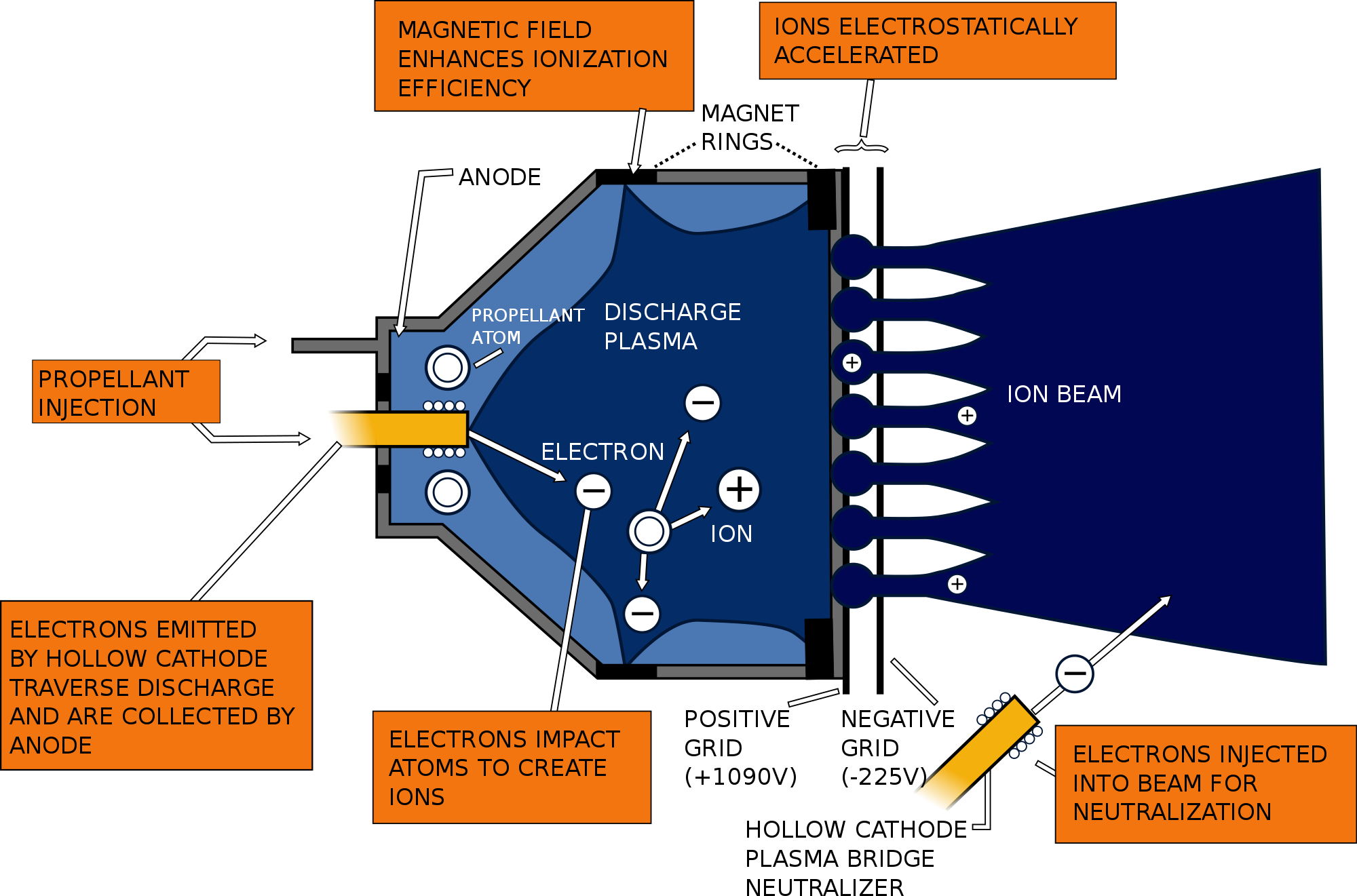 The first step in the NSTAR thrust generation process is to ionize the gas (in this case xenon). To produce ions, atoms of xenon propellant are injected into the ionization chamber of the thruster along with electrons from a cathode. As the electrons bombard the xenon atoms, an electron is stripped from each one, creating xenon ions with a positive charge.

A second cathode at the back of the thruster injects electrons into the beam to neutralize the positively charged xenon ions. This is necessary to prevent the ions from being attracted back to the spacecraft, which would negate any thrust produced.

A number of variations in electrostatic ion engine design exist, including Hall effect thrusters and field-emission electric propulsion (FEEP), but each method shares the defining characteristic of generating thrust by expelling ions.

Ion thrusters, in particular Hall effect thrusters, have been used for decades to stabilize satellites and adjust their attitudes. They are also used to boost geostationary communications satellites that have run out of fuel into graveyard orbits out of the way of functioning satellites. 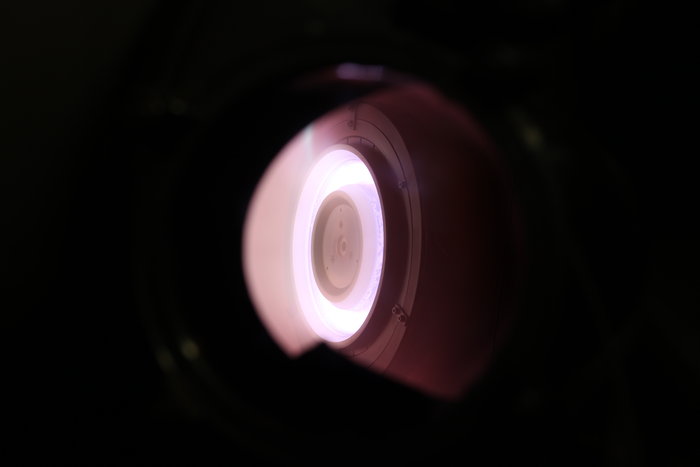 ESA’s air-breathing ion thruster gathers its fuel directly from the atmosphere. The engine could be used on low-flying satellites as a perpetual drag-compensation system that never runs out of fuel. Source: ESA

But in addition to the rather mundane tasks of maintaining and altering satellite orbits or adjusting satellite orientations, ion thrusters have served as the main propulsion units powering spacecraft to other celestial bodies. Ion thrusters have powered NASA’s Deep Space 1 and Dawn missions on journeys to visit asteroids, comets and dwarf planets; Japan’s Hayabusa spacecraft to return a sample from an asteroid; and the European Space Agency’s SMART-1 satellite to enter orbit around the Moon.

This flight-proven technology is only beginning to realize its full potential. Innovative research is continually pushing the boundaries of ion thruster design.

The European Space Agency announced this year that it had successfully tested an air-breathing ion thruster that scoops its fuel directly from the atmosphere. The engine, running on an effectively unlimited supply of rarefied nitrogen-oxygen in the upper reaches of the atmosphere 200 km up, could allow low-flying satellites to operate for extended periods of time with no concern for depleting their fuel reserve.

To recognize the full promise of ion thrusters, however, the technology must be scaled up to create bigger drives capable of producing more thrust to propel larger spacecraft. 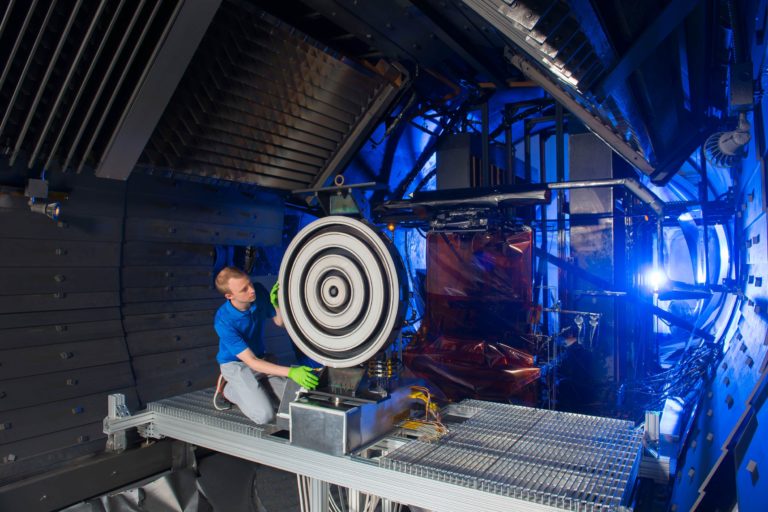 Engineers have been hard at work on achieving that goal. Aerojet Rocketdyne has been toiling away under contract to NASA on a 13.3 kW Advanced Electric Propulsion System (AEPS) consisting of a Hall effect ion thruster, power processing unit and xenon flow controller. The system could become an integral component of the Power and Propulsion Element providing maneuverability for the planned Lunar Orbital Platform-Gateway to be built in cislunar space near the Moon.

To realize ion propulsion’s grandest ambitions, though, such as propelling manned missions to Mars, even more power is required. Researchers from the University of Michigan, NASA and the U.S. Air Force have been developing an ion engine over the past six years that is the most powerful Hall thruster yet. The 500 lb device, known as X3, set records during tests last year, reaching power levels of 102 kW and generating 5.4 N of force, a big improvement over the previous high of 3.3 N and over 59 times more powerful than the thruster flown on DAWN.

See the video at the top of this article for a look at how ion thrusters work. (Video source: NASA’s Jet Propulsion Laboratory)

By posting a comment you confirm that you have read and accept our Posting Rules and Terms of Use.
Re: Electric Spacecraft Propulsion: How Do Ion Thrusters Work?
#1

Why don't we just use what the gov, etc. learned from downed alien space craft ? Rather than wasting time and money on old engineering ! The gov, and NASA ,etc. hides every thing from us like we are just dumb sheep !

Re: Electric Spacecraft Propulsion: How Do Ion Thrusters Work?
#3
In reply to #1
emellish

Well said! Probably because their black budget is so expensive they dare not admit to its existance---never mind releasing advanced tech from within.

Re: Electric Spacecraft Propulsion: How Do Ion Thrusters Work?
#2

Perhaps there will be more than three types of electric propulsion in the future?
http://www.bestsyndication.com/072407_solar-power-sailing-in-outer-space-extend-long-distance-travel.htm