The landing gear collapse on a FedEx MD-10-10F, wide-body cargo jet in October 2016 was caused by corrosion that led to fatigue cracking, according to a National Transportation Safety Board (NTSB) report released August 23.

Shortly after the FedEx MD-10-10F landed at the Fort Lauderdale - Hollywood International Airport in Florida, the flight crew reported hearing a bang as the brakes were applied. The airplane yawed to the left as it slowed and came to rest on the left side of the runway, followed by a fuel-fed fire on the left wing. The two crew members evacuated the plane with one suffering minor injuries. The plane was damaged beyond repair. 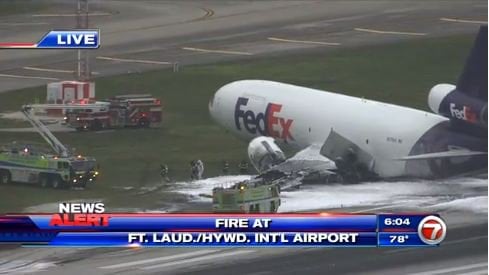 TV news image of the crash shortly after it occurred in October 2016.NTSB investigators found the failure of the left main landing gear was the result of a metal fatigue crack that began within the gear. The crack went undetected and gradually progressed until the gear collapsed.

The NTSB also said the interval of nine years between scheduled overhauls of the main landing gear (MLG), which exceeded Boeing’s recommendation of eight years, contributed to the accident. Investigators determined the fatigue crack would likely have been detected during an overhaul. The gear failed eight years and 213 days after its last overhaul, NTSB says.

The flight data recorder showed that the airplane’s touchdown appeared normal and that it rolled on the runway for about 12 seconds before the left main landing gear collapsed. The first damage to the runway occurred about 3,750 ft from the runway 10L threshold. The airplane came to rest about 6,600 ft from the threshold. 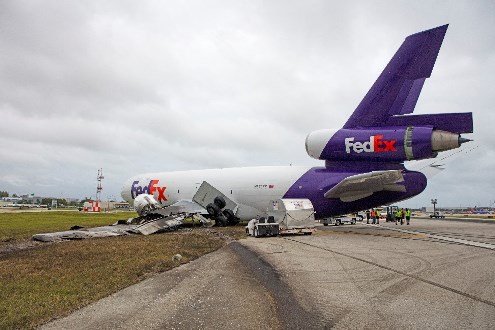 (Click to enlarge.) Photo showing the left side of the plane, including the collapsed landing gear. Source: NTSBAfter the left gear collapsed, the left engine and left wingtip hit and scraped the runway, rupturing fuel lines and the left wing fuel tank. Fuel from the left wing ignited as the airplane rolled down the runway. The fire continued to burn after the airplane came to rest, resulting in fire damage to the left wing. The fire was extinguished by airport fire and rescue personnel.

In its accident report, the NTSB says that the outer cylinder of the left MLG was fractured midway through what it identified as the air filler valve bore on the aft side. The outer cylinder of the left MLG shock strut fractured around its entire circumference, the report says. In addition, the upper portion of the cylinder remained intact and attached to the airplane at the forward and aft trunnion lugs. No anomalies were noted with the trunnion lugs or trunnion bolt attachment points.

An NTSB metallurgical examination of the main fracture region found almost all of the fracture surfaces showed a dull luster with a rough surface, with radial lines and chevron marks. NTSB says that these features were consistent with "overstress fracture in low ductility" (that is, hardened) metal alloys and having "emanated from the air filler valve bore" on the main landing gear.

An airport video of the landing showed that the No. 1 engine was initially supporting the airplane after the left MLG collapse when a fire began near the left-wing tip. The airplane eventually stopped off the left side of runway 10L, about 30° to 40° off the runway heading.

The airport video showed a fireball erupted at the No. 1 engine. The captain tried to discharge a fire bottle in the No. 1 engine, but it didn't discharge. The crew evacuated the airplane through the right cockpit window.

The NTSB says that FedEx performed a safety risk assessment of all the MLGs in its MD-10-10F fleet (27 in-service airplanes with 54 MLG subjected to borescope inspection). Of those inspected, 16 cylinders (26 percent) were identified as "concerns." Fourteen of those showed adverse features in the bore, such as tooling marks and corrosion pitting.

FedEx reviewed its maintenance program and returned to an eight-year overhaul limit for MLG cylinders as recommended by Boeing. FedEx previously had been granted an extension of nine years for cylinder service life. Any cylinders with pitting have been permanently removed from service, NTSB says.

By posting a comment you confirm that you have read and accept our Posting Rules and Terms of Use.
Advertisement
RELATED ARTICLES
Earnhardt plane's landing gear collapsed after failed go-around, NTSB says
Watch: NTSB Report on FedEx Plane Crash, Autonomous Drones, Nanomaterial Production by Flame Spray Pyrolysis
NTSB Urges System Alert After Close Call at SFO
Pilot error, then a fatal stall as a Learjet crashed on final approach
How Luck Ran Out in Vegas for This Overseas Flight
Advertisement