A private plane carrying NASCAR driver Dale Earnhardt Jr. and his family bounced twice on landing, attempted a go-around maneuver that failed, then landed hard with 1,000 feet of runway remaining and skidded through an airport perimeter fence after its landing gear collapsed. The plane burst into flames and was destroyed.

That was the sequence of events related to the August 15 accident involving the Citation Latitude jet that was destroyed by fire after landing at Elizabethton Municipal Airport (0A9) in Elizabethton, Tennessee, according to the National Transportation Safety Board (NTSB), which is investigating the accident. 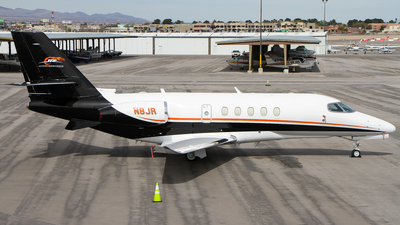 The accident plane parked in Las Vegas in 2017. Source: JetPhotos by C.V. GrinsvenThe airline transport-rated pilot and copilot were not injured. The three passengers, who included Earnhardt, his wife and child, sustained minor injuries. Day, visual meteorological conditions prevailed, and no flight plan was filed for the flight.

According to the NTSB's preliminary report, the flight originated at Statesville Regional Airport (SVH) in North Carolina at around 3:20 p.m. Eastern Daylight Time and was headed for Elizabethton. According to the flight crew, the flight departed under visual flight rules and climbed to 12,500 ft. No air traffic control services were requested. The preflight, departure and en route portions of the flight were reported to be routine.

Approaching the Elizabethton airport, the crew announced via the airport's common traffic advisory frequency their intention to land on runway 24. The reported weather at the time included calm wind, 10 miles visibility, scattered clouds at 4,700 and 5,500 ft, broken clouds at 7,000 ft and altimeter setting 29.97 in of mercury.

Airport surveillance video captured the initial touchdown, which occurred near the runway touchdown zone, as well as portions of the accident.

The plane was consumed by fire after it came to rest on a nearby highway. Source: NBC.comThe NTSB said that the airplane bounced twice, then continued airborne down runway 24 until it touched down a third time with about 1,000 ft of paved surface remaining. The video showed that the right main landing gear collapse and the outboard section of the right wing hit the runway shortly after the third touchdown.

The airplane left the paved surface beyond the runway 24 departure-end threshold, continued through an open area of grass, down an embankment, through a chain-link fence and up an embankment where it came to rest on the edge of a highway.

The pilots reported that, following the second bounce, a go-around was attempted; however, the airplane did not respond as expected, so they landed straight-ahead on the runway and could not stop.

After the airplane came to rest near the highway, the flight crew secured the engines and assisted the passengers with the evacuation. The main entry door was used to exit the airplane. A post-accident fire was in progress during the evacuation.

The NTSB said the fuselage aft of the main entry door, the right wing, and the empennage were consumed by the post-accident fire. The left main and nose landing gear were separated from the airframe during the impact. The right main landing gear remained under the right wing and was heavily fire damaged.

The Citation Latitude was a low wing, cruciform tail design with twin, fuselage-mounted Pratt and Whitney Canada 360D turbofan engines. It was equipped with two cockpit seats and nine passenger seats. The airplane was built in 2015 and the owner bought the airplane new. The total time of the airframe was about 1,165 hours, the NTSB said. The maximum takeoff weight was 31,025 lbs.

The cockpit, which was undamaged by fire, was equipped with a Garmin G5000 advanced integrated flight deck (flat screen displays and touch screen controls) that recorded numerous flight and systems parameters. The data was downloaded following the accident. The airplane was also equipped with a cockpit voice recorder (CVR). The CVR was damaged by the postaccident fire and was sent to the NTSB Vehicle Recorders Laboratory in Washington, DC, for examination and download.

By posting a comment you confirm that you have read and accept our Posting Rules and Terms of Use.
Advertisement
RELATED ARTICLES
Corrosion, then Fatigue Cracking Led to FedEx Plane Crash
Pilot error, then a fatal stall as a Learjet crashed on final approach
NTSB Urges System Alert After Close Call at SFO
Jammed flight control led to aborted takeoff, accident report finds
NTSB team completes first review of Boeing 767 crash data
Advertisement