SolarReserve reportedly has tallied almost four months with no bird deaths at its 110 megawatt (MW) Crescent Dunes concentrating solar photovoltaic project in Nevada. This is done by changing the algorithm for aiming the facility’s mirrors when they are in standby position. 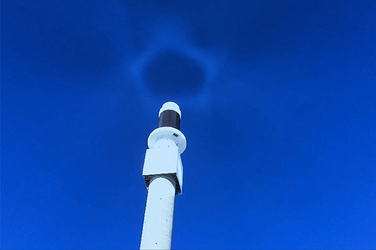 A tight circle of solar flux which caused the bird mortalities. Source: cleantechnica.comIn January, 115 birds were killed at Crescent Dunes as they flew through a tight circle of solar flux with intense heat created above the central tower by the mirrors, also known as heliostats, which were originally in standby mode. Following the deaths, SolarReserve stopped testing, put a new standby algorithm into effect and resumed testing. It also changed the shape of the solar flux above the receiver from a concentrated donut shape to one having no more than four suns transect any one position in the air. The facility is currently in its commissioning phase.

A power tower uses an array of heliostats to focus the sun’s rays. The resulting heat boils water that is used as part of a conventional steam cycle to produce electricity. A utility scale project may involve hundreds or thousands of heliostats that typically are in a circular formation at the tower’s base. The tower houses the solar receiver, power generating equipment and—in the case of Crescent Dunes—molten salt that is used to extend power generation to evening hours after sunset. It is the second utility-scale power tower to be built in the U.S., after Brightsource’s 377 MW Ivanpah plant, and the first to include storage.

Tim Conner, vice president of Engineering and Technology at SolarReserve was quoted as saying that the receivers seem to create a deterrent for birds. He says that birds appear to avoid the brightness of the receiver when it is in operation and fly around it.

By posting a comment you confirm that you have read and accept our Posting Rules and Terms of Use.
Advertisement
RELATED ARTICLES
Crescent Dunes Solar Energy Ready to Ramp Up
SolarReserve Gets OK for 450 MW Solar Tower
Consortium focuses on heliostat cost reduction
How Does Solar Energy Work? CSP Basics
Smaller Concentrating Solar Receivers Feature Fractal Designs
Advertisement