While academics have naturally grouped together science, technology, engineering and math for at least 50 years, STEM evolved from the older METS acronym in the 1990s. Since that time, technologists and others have voiced opinions on why STEM alone misses the mark, and which additional letters could enrich the acronym’s academic curriculum and understanding.

As a result, STEM now has the following variations, in order of relative absurdity:

Former civil engineer and entrepreneur Dacia Kung attempted to put the STEM debate to bed by proposing "STEM -> BRACED": science, technology, engineering and math through business, recreation, art, culture, expression and drama. While Kung’s acronym is somewhat tongue-in-cheek, it highlights the absurdity of continually adding letters in an attempt to balance STEM. Add enough letters, as Kung did, and STEM education begins to look like an average curriculum – the very antithesis of the original effort to focus on science and tech education.

One of STEM’s major weaknesses has been to simply define it and establish boundaries with other disciplines. The U.S. National science Foundation attempted to do this decades ago by establishing STEM as a standalone concept, but it has eroded to the point of blending back in with fine art, language arts and social sciences.

The STEM definition problem is not limited to academic curricula: it also has wide-reaching effects in employment as well.

Much of what is said and believed about STEM programs and education can be traced to the concept of the “STEM crisis” — that the U.S. and other affected countries are producing many fewer STEM graduates than future STEM jobs. This belief has affected public policy and education decisions for years. In a 2012 report, for example, President Obama’s Council of Advisors on science and technology (PCAST) famously stressed the “need for approximately 1 million more STEM professionals than the U.S. will produce at the current rate over the next decade if the country is to retain its historical preeminence in science and technology,” and laid out specific ways to close the STEM degree and skills gap. 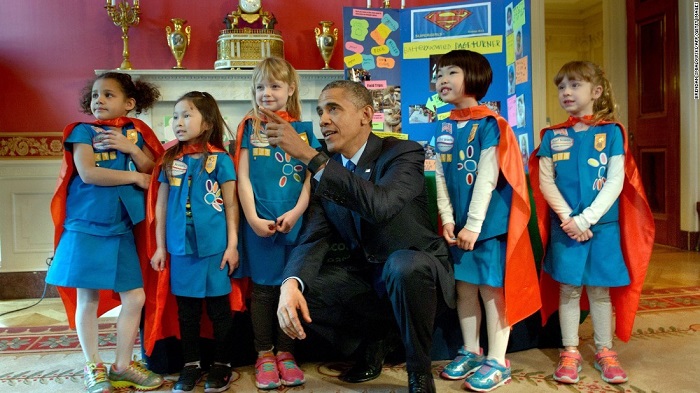 Former U.S. President Barack Obama at the 2015 White House Science Fair. Mr. Obama's science advisers predicted a gap of hundreds of thousands of STEM graduates per year. Image source: Official White House Photo/Pete SouzaSince the time of this report, a number of writers have cast doubt on the fact that the STEM crisis exists at all. A 2013 IEEE Spectrum editorial by Robert Charette combed hundreds of studies and data sets and found that there is no sweeping STEM employment crisis; conversely, it cites studies that show a glut of unemployed STEM workers or those working outside their science and technology field. Charette said the boom-and-bust cycles typical of the highly competitive science and tech industries are driving faulty economic forecasting, and have been for some time. Since the 1930s, leading technologists as varied as Vannevar Bush, MIT president James Killian and Bill Gates have warned about looming shortages in scientists and engineers, all of which never came to pass.

Charette posits that the STEM crisis myth is perpetuated by a number of actors: corporations, who enjoy the benefits of an oversupply of workers; governments, who benefit from intellectual capital used for innovation and national defense; and the economy, which benefits from smart people entering the workforce, even if they don’t work in a STEM field.

Other factors play into the proliferation of the STEM crisis, of course. Economic forecasting is often incorrect, so young people may enter a degree program or field based on predictions of an expanding market, only to be left without prospects. STEM vacancies can also be filled by H1B workers at significantly less cost compared to a domestic worker.

The STEM definition problem crops up here, too: even sans acronyms, the STEM workforce is notoriously difficult to pin down. A 2015 U.S. Bureau of Labor report found that STEM workers could range from five to 20 percent of the total U.S. labor force, depending on how STEM is defined. Some studies consider medicine, architecture, science education and even social sciences part of the STEM domain, while others exclude these areas. The same report found that there is no overarching STEM worker shortage, especially in academia, but software developers, petroleum engineers, data scientists and others are in high demand and could face shortages in the government and private sectors.

It’s impossible to have a meaningful conversation about STEM or the STEM crisis if there is little agreement on what STEM actually includes. But even if the purported labor crisis never comes to pass, STEM education — without the additional acronyms — is still valuable. It’s less a siloing of these subjects and more their application to other broad areas of study. A proper educational focus on STEM isn’t arguing whether the arts or social sciences belong in STEM, but figuring out how STEM education applies to the arts and “softer” sciences.

Examples of cross-pollination between tech and the liberal arts are nearly endless. Consider:

-An artist learning more about the inner workings of the state-of-the-art software they use to create visuals.

-An automotive engineer learning about visual arts to help design a vehicle that is both mechanically and aesthetically solid.

-Business students gaining in-depth knowledge about cutting-edge technological products, to allow them to potentially design improved products in the future.

Singling out STEM education as supposedly more important than other domains was bound to cause some hard feelings. These feelings may be driving attempts to add different subjects back into the STEM concept. Consider that extracting STEM, and STEM alone, and giving it a renewed focus allows educators to re-insert it into their curriculum in new and exciting ways.

Balance in any curriculum is difficult, but it is key to producing well-rounded individuals. Leonardo Da Vinci possessed a great talent for engineering, but he was also an accomplished artist, musician, writer and botanist. Einstein was one of the greatest physicists in history, but he also passionately loved music and was an accomplished violinist.

Likewise, an accomplished engineer benefits immensely from knowing how to write grants, draw figures, devise business plans and relax during breaks – of which he or she can learn through a balanced education. A focused STEM education is great for a passionately interested student, but it’s even greater combined with a balanced curriculum that encourages critical, creative thinking – and even some fun to go along with it.

By posting a comment you confirm that you have read and accept our Posting Rules and Terms of Use.
Advertisement
RELATED ARTICLES
Is STEM Better Off as STEAM?
Survey: Teen girls' interest in pursuing STEM careers on the decline
STEAM education helps students solve future problems
Foundation announces initiative to inspire girls to pursue STEM careers
The Gender-Equality Paradox for STEM
Advertisement