Drones are starting to move from a hobbyist pursuit to the commercial arena. The last several years there has been increasing talk of drone delivery services. Airbus recently announced a partnership with Wilhelmsen Ships Service to test shore-to-ship drone delivery services at the Port of Singapore. As a first step, the partnership plans to conduct a two-week trial with parcel deliveries to and from ships anchored up to 1.5 nautical miles offshore.

In Iceland, the country’s largest online marketplace Aha partnered with Flytrex last year to test drone delivery in Reykjavik. The tests have been a success and they plan to expand drone deployment over the next few years. Iceland is ahead of the curve on drones, but not by much. Aviation regulators all over the world have been working to safely incorporate drones. Aha is allowed to fly 13 routes around Reykjavik, and they can make up to 700 m detours to reach customers, which provides them with an effective coverage of half the city. 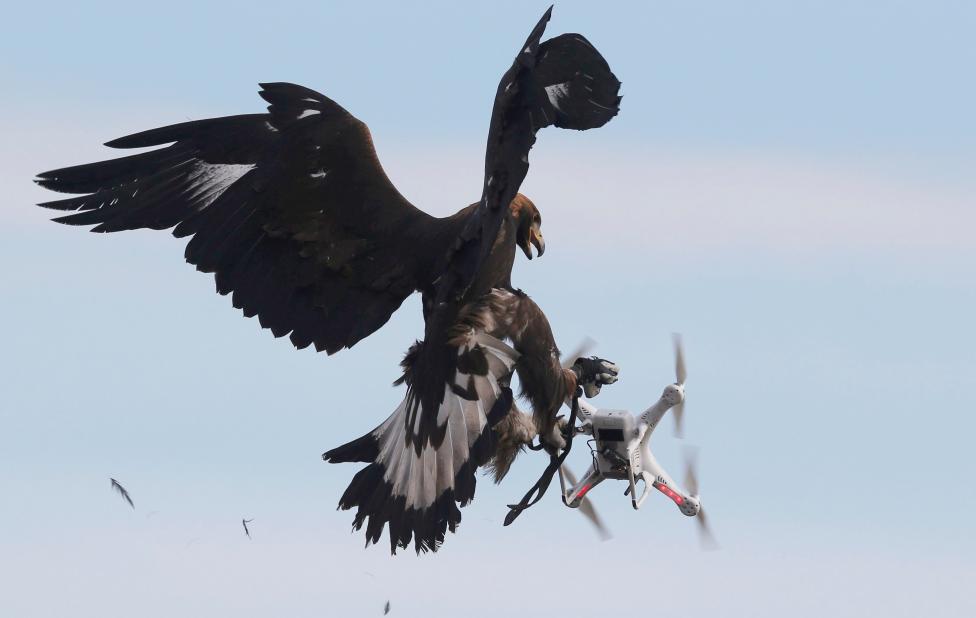 Eagle attacking a drone. Source: REUTERS/Regis DuvignauIn May of this year, the U.S. Department of Transportation announced the first 10 projects chosen for its three-year drone integration pilot program. The drone projects include site mapping, inspections, traffic monitoring, commercial and medical delivery and law enforcement surveillance. Waivers will be granted from the Federal Aviation Administration allowing night flights and beyond line of sight flights. In exchange, project planners agree to share their drone information with the federal agencies to help them write drone-friendly regulations.

The eventual adoption and regulation of drones for commercial purposes seems to be a foregone conclusion. However, as companies and municipalities start to experiment with drone use they are learning something that drone hobbyists have known for a long time: Birds attack drones. It seems birds don’t like drones and often will aggressively pursue and attack them, sometimes for extended periods of time.

A recent story in the Wall Street Journal described how Australia’s wedge-tailed eagles have been attacking and destroying mapping drones. These eagles are the largest bird of prey in Australia, with a wingspan of up to 9 ft. 4 in. and large talons. Companies tend to use drones for mining survey operations in Australia’s outback. At roughly $80,000, these drones contain expensive equipment and are quite large, with a 7 ft. wingspan. They were originally thought to be too large to be attacked. Unfortunately, the eagles see these drones as rivals entering their territory and dive-bomb them, knocking them out of the sky. One operator described the resulting crashed drone as “a pile of splinters.”

It isn’t just birds of prey that will attack a drone either; stories abound about near misses with aggressive sparrows. In 2015, an operator of a Phantom 3 in Scotland realized his drone was flying towards a flock of seagulls. The operator immediately hit the return to home (RTH) button only to watch in dismay as his returning drone was repeatedly harassed by the angry seagulls. Even as the drone was landing, a couple of gulls tried to attack it and for about an hour afterward some 30-plus loudly squawking gulls circled menacingly overhead.

The problem is so prevalent in some areas that camouflage has been employed to try to prevent attacks, with little success. Some operators have toyed with the idea of onboard pepper spray or noise devices for protection, but to date, the most popular approach is evasive maneuvers followed by maxing out the throttle and trying to out climb or outrun them. A more scientific approach of respecting the birds' habitat and avoiding traditional nesting grounds is also being considered, but ultimately it is simply going to take time and adaptation.

The drone logistics and transportation market is estimated to reach $11.2 billion in 2022 and expected to grow to almost $30 billion five years later. Increasing demand for fast, cheap commercial delivery along with the surveillance and support possible for law enforcement and military operations will drive the market at a compound annual growth rate of 21 percent. By the end of the next decade, millions of drones are expected to be airborne at any given time. Even if birds attack drones just one percent of the time, that means hundreds of thousands of drones destroyed every year, resulting in millions of dollars in losses.

For most of our history, the sky has belonged to the birds. It is only the past century that we have been able to significantly fill the skies with planes, helicopters and other technology. These aerial vehicles tend to operate far above birds' habitats or are so big that birds avoid them. Aside from the occasional hang glider attack, birds have not really felt threatened by or been a threat to our airborne technology. With drones, all of that changes. Now smaller airborne vehicles are directly encroaching upon birds' natural habitat and it should not be surprising that they are reacting violently.

The economic benefits of drones are too great to allow the birds to stop their implementation. However, the birds do represent an interesting engineering hurdle for the widespread adoption of drones. Beyond damage to the drone itself, heavy drones randomly falling out of the sky represents a risk to those on the ground. Will birds simply adapt to the drones and eventually leave them alone? Or will the drones have to incorporate countermeasures such as pepper spray, camouflage and noise to scare off the birds? However it turns out, what is certain is that at the moment birds are not quite ready to concede the skies to drones.

By posting a comment you confirm that you have read and accept our Posting Rules and Terms of Use.
Advertisement
RELATED ARTICLES
More Delivery Drones to Occupy the Skies Over City in Iceland
Dawn of the Drones (March 6-12)
Video: Project Wing Just Took a Major Step Toward Successful Drone Delivery
Drone Impacts with Aircraft Can Be More Lethal Than Birds, Study Says
Video: What Happens When a Drone Collides with an Airplane?
Advertisement