The National Transportation Safety Board (NTSB) says that the fan blades on an engine that failed on a Southwest Airlines flight last month were overhauled almost 11,000 engine cycles before the accident. During that November 2012 overhaul, the blades were fluorescent penetrant and visually inspected. 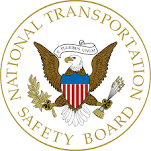 The Boeing 737, powered by CFM International engines, experienced a failure of the left CFM-56-B engine after departing New York’s LaGuardia Airport on April 17 on its way to Dallas. The engine experienced a fan blade failure, which resulted in the loss of the engine inlet and cowling.

Fragments from the cowling and engine inlet struck the fuselage, causing a rapid depressurization. The crew conducted an emergency descent and diverted to Philadelphia International Airport. There were 144 passengers and five crew members onboard. One passenger suffered fatal injuries and eight passengers suffered minor injuries. The airplane was substantially damaged, NTSB says.

The Boeing 737-700 was powered by CFM56-7B engines. The engines were produced by CFM International, a 50/50 joint company of GE and Safran Aircraft Engines of France. CFM sent a team of technical representatives to the site to assist the NTSB in its investigation. 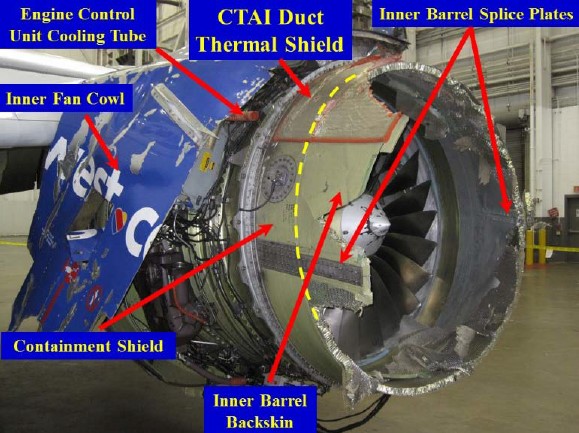 Major damage points to the Southwest Airlines engine. Credit (all photos): NTSBGE produces the high-pressure compressor, combustor and high-pressure turbine; SNECMA manufactures the fan, gearbox, exhaust and the low-pressure turbine; and some components are made by Avio of Italy. The engines are assembled by GE in Evendale, Ohio, and by SNECMA in Villaroche, France.

The NTSB says that an initial examination of the airplane involved in the April 17 accident revealed that the majority of the inlet cowl was missing, including the entire outer barrel, the aft bulkhead and the inner barrel forward of the containment ring.

The inlet cowl containment ring was intact but exhibited numerous impact marks. Examination of the fan case revealed no through-hole fragment exit penetrations; however, it did exhibit a breach hole that corresponded to one of the fan blade impact marks and fan case tearing.

According to the preliminary investigation, the No.13 fan blade had separated at the root; the dovetail remained installed in the fan disk. NTSB examination of the No. 13 fan blade dovetail exhibited features consistent with metal fatigue initiating at the convex side near the leading edge. Two pieces of fan blade No. 13 were recovered within the engine between the fan blades and the outlet guide vanes.

Fracture surface with fatigue indications.One piece was part of the blade airfoil root that mated with the dovetail that remained in the fan disk; it was about 12 in. span-wise and full width and weighed about 6.825 lb. The other piece, identified as another part of the airfoil, measured about 2 in. span-wise, appeared to be full width, was twisted and weighed about 0.650 lb.

The No. 13 fan blade was examined further at the NTSB Materials Laboratory. Fatigue fracture features emanated from multiple origins at the convex side and were centered about 0.568 in. aft of the leading edge face of the dovetail and were located 0.610 in. outboard of the root end face. The origin area was located outboard of the dovetail contact face coating, and the visual condition of the coating appeared uniform with no evidence of spalls or disbonding.

The fatigue region extended up to 0.483 in. deep through the thickness of the dovetail and was 2.232 in. long at the convex surface. Six crack arrest lines (not including the fatigue boundary) were observed within the fatigue region. The fracture surface was further examined using a scanning electron microscope, and striations consistent with low-cycle fatigue crack growth were observed. 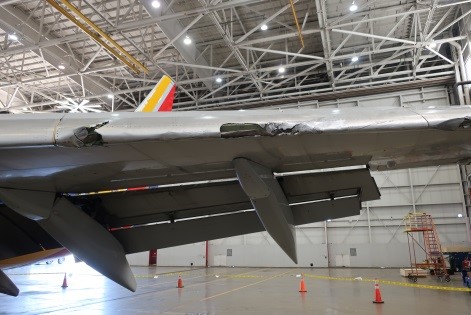 After an Aug. 27, 2016, accident in Pensacola, Florida, in which a fan blade fractured, eddy current inspections were incorporated into the overhaul process requirements, NTSB says. The NTSB reports a Boeing 737-700, operating as Southwest Airlines flight 3472, experienced an "uncontained engine failure and cabin depressurization" as it climbed after takeoff. That plane landed without further incident and no passengers were injured.

The NTSB says its materials group is working to estimate the number of cycles associated with fatigue crack initiation and propagation in the No. 13 fan blade and to evaluate the effectiveness of inspection methods used to detect these cracks.

Also on April 20, the Federal Aviation Administration issued emergency AD (EAD) 2018-09-15 based on the CFM International service bulletin. The EAD required CFM56-7B engine fleet fan blade inspections for engines with 30,000 or greater cycles. The EAD required that within 20 days of issuance that all CFM56-7B engine fan blade configurations be ultrasonically inspected for cracks. If any crack indications are found, the affected fan blade must be removed from service before further flight. 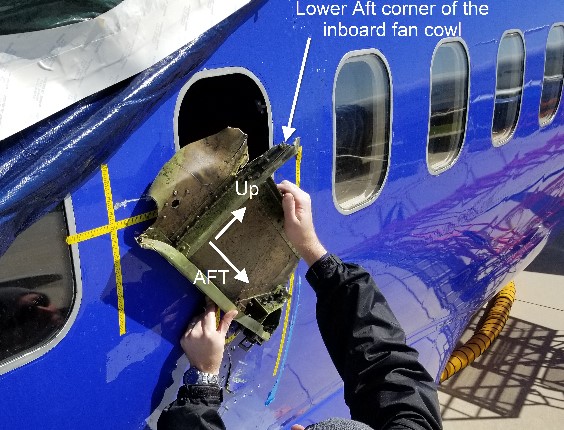 Window 14 with portion of engine inboard fan cowl.The NTSB says that the rest of the Southwest Airlines jet airframe exhibited significant impact damage to the leading edge of the left wing, left side of the fuselage and left horizontal stabilizer. A large gouge impact mark, consistent in shape to a recovered portion of fan cowl and latching mechanism, was adjacent to the row 14 window and the window was entirely missing. No window, airplane structure or engine material was found inside the cabin.

Change in Pressure and a Steep Left Roll

During interviews with the NTSB, the flight crew stated the climb from LaGuardia was normal with no indications of any problems; the first officer was the pilot flying and the captain was the pilot monitoring.

They reported experiencing a sudden change in cabin pressure, aircraft yaw, cockpit alarms and a “gray puff of smoke.” They donned their oxygen masks and the first officer began a descent. Flight data recorder (FDR) data showed that the left engine parameters all dropped simultaneously, vibration increased and within 5 seconds the cabin altitude alert activated.

The captain took over flying duties and the first officer began running emergency checklists. The captain requested a diversion from the air traffic controller; she first requested the nearest airport but decided on Philadelphia. The controller provided vectors to the airport with no delay.

The flight crew reported initial communications difficulties because of the loud sounds, distraction and wearing masks, but as the airplane descended the communications improved. The captain initially was planning on a long final approach to make sure they completed all the checklists, but when they learned of the passenger injuries, she decided to shorten the approach and expedite landing.

A cockpit voice recorder (CVR) group was convened and has completed a draft transcript of the entire event. The CVR transcript will be released at a later date.

By posting a comment you confirm that you have read and accept our Posting Rules and Terms of Use.
Re: Southwest Airlines Plane Suffered Substantial Damage, NTSB Says
#1

No comment on the passenger wearing a seat belt or not?