The National Transportation Safety Board said the faulty engine on a Southwest Airlines plane that made an emergency landing in Philadelphia was missing a fan blade.

The Dallas-bound Boeing 737 from New York was forced to land in Philadelphia on April 17 when an engine exploded with 143 passengers and five crew members aboard. 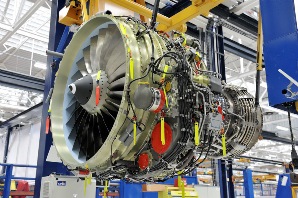 (Click to enlarge.) A CFM56-7B engine similar to one that failed April 17. Credit: Engine Lease FinanceOne passenger was killed. Her death was the first attributed to U.S. commercial aviation since 2009 and the first in Southwest's 50-year history.

NTSB Chairman Robert Sumwalt said at a press conference that a fan blade was missing from the engine assembly and there was evidence of "metal fatigue" where it separated.

The Boeing 737-700 was powered by CFM56-7B engines. The engines were produced by CFM International, a 50/50 joint company of GE and Safran Aircraft Engines of France. (Watch a video explaining how the engine works.)

CFM says it sent a team of technical representatives to the site to assist the NTSB in its investigation.

According to a statement, the CFM56-7B engine powering this aircraft has compiled an "outstanding safety and reliability record" since entering revenues service in 1997. It powers an estimated 6,700 aircraft worldwide. The engine has accumulated more than 350 million flight hours.

The NTSB reports that in August 2016, a Boeing 737-700, operating as Southwest Airlines flight 3472, experienced an "uncontained engine failure and cabin depressurization" as it climbed after takeoff. The plane landed without further incident and no passengers were injured.

Missing a fan blade before the engine failure, or after?

Re: Southwest Airlines Engine Was Missing a Fan Blade, NTSB Says
#2
In reply to #1
dj95401

I think they'll find the missing blade to be the root of the failure. The question is, was this failure due to metal fatigue or a manufacturing defect?

When I was an inspector for the Airline industry, I made it a point to pay close attention to the blade root/ hub of all the rotating assemblies, just for this reason. NDT doesn't always show the defects unless you send it out to be x-rayed. Even that can be fallible.

Re: Southwest Airlines Engine Was Missing a Fan Blade, NTSB Says
#3
In reply to #2
lyn

Apparently, that caused the failure.

Also, if I interpreted the diagram correctly, the victim was seated across the aisle from the blown out window?

Re: Southwest Airlines Engine Was Missing a Fan Blade, NTSB Says
#4
In reply to #3
dj95401

I don't know, what I understood she was seated next to the window with her seatbelt on. That was probably why she wasn't completely blown out through the window opening. Chances are, she probably got hit by shrapnel that departed the engine before being "sucked out" blown out

I've had to do "emergency dumps" on the pressurized cabins systems on the ground and they are no joke**, anything not tied down or secured would move to the back pressure bulkhead outflow valve. And, if the temperature was cold enough and humidity was high enough, you could fill the cabin with fog and or snow from the pressure drop.

** You do not try this if you have a cold, ear infection, plugged up ear as it will prove to be extremely painful, but I'm sure you already knew that.