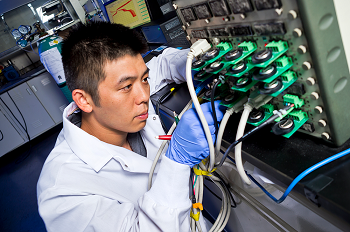 University of Maryland researchers designed a water-based zinc battery to overcome these limitations. The aqueous electrolyte used is based on metallic Zn and lithium salts at high concentrations. The resulting rechargeable device could offer a low-cost, safe alternative for consumer electronics, cars and electrical grid storage. The aqueous zinc battery could also eventually be used in extreme conditions to improve the performance of safety-critical vehicles such as those used in aerospace, military and deep-ocean environments.

Problems posed by battery fire incidents affecting cell phones, laptops and electric vehicles are eliminated with this battery chemistry, which also maintains energy densities comparable to or exceeding those of conventional lithium-ion systems. Reversibility was realized by altering the solvation sphere structure of zinc cation. Dendrite growth during usage and recharging, as well as sustained water consumption, are not performance issues with this battery design.

By posting a comment you confirm that you have read and accept our Posting Rules and Terms of Use.
Advertisement
RELATED ARTICLES
Battery systems and the need for their optimization
A salty solution to safe battery design
A Salty Solution for Safer Batteries
New Battery Technology Could Make a Household Battery Suitable for Large Grid Storage Applications
Dendrite Mitigating Silicone Anode in Lithium Batteries Found to Improve Safety and Extend Life
Advertisement