Lithium metal batteries are attractive from an energy density viewpoint, but lithium dendrite growth causes these batteries to fail. Dendrites decrease battery life and pose a safety hazard. The dendrites grow until they bridge the gap between the electrodes resulting in a short circuit and fires. The dendrites also inhibit charging speed because they tend to be more prevalent at higher charging currents. Earlier research led by Edwin García, a professor of materials engineering at Purdue University, found that stress drove the growth rate of the faster-growing base nucleated dendrites. They found that as lithium accumulated on the lithium cap or tip, deposits stress was induced resulting in an exponential growth of the base dendrites. The ASU and Rice University researchers found that using an anode substrate of silicone relieved the residual stress in lithium-plated deposits, which nucleates lithium dendrite formation. 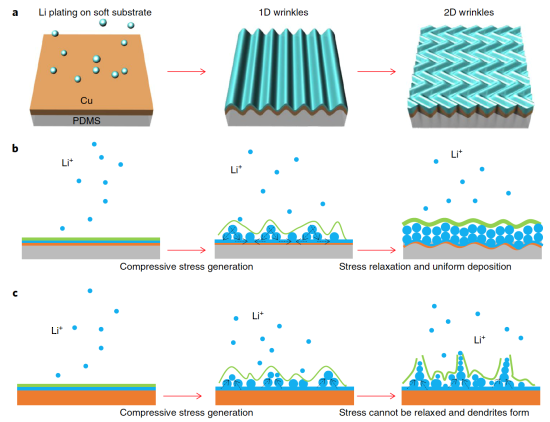 Figure 2. Research hypothesis: stress relaxation can synergistically mitigate lithium dendrite growth. a, Cu thin film wrinkles due to the compressive stress generated during Li plating. b, Upon Li electroplating, compressive stress is generated, and soft substrate releases compressive stress, and thus mitigates Li dendrite growth. c, Li-plating-induced compressive stress cannot be relaxed on hard Cu foil, and causes the formation of Li dendrites. Orange, blue, green and grey represent Cu, Li, SEI and PDMS, respectively. Source: Wang et al ASUThe researchers have used a three-dimensional layer of polydimethylsiloxane (PDMS) or silicone, as the substrate of lithium metal anode to mitigate dendrite formation. The approach is described in more detail in their Nature Energy paper, “Stress-driven lithium dendrite growth mechanism and dendrite mitigation by electroplating on soft substrates.” The stress relieving silicone anode technology could extend battery life and diminish safety risks for both lithium-ion and lithium-air batteries, as well as for other metal-anode-based batteries, according to Hanqing Jiang, a professor in Arizona State University’s School for Engineering of Matter, Transport and Energy and one of the corresponding authors of the paper. 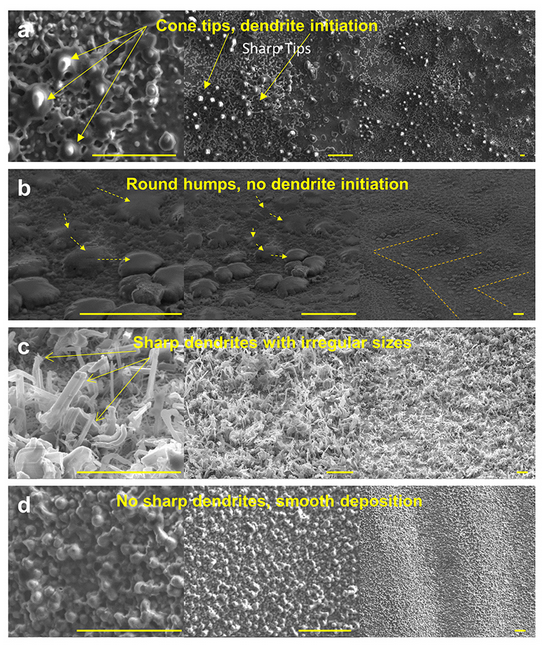 Jiang and his team solved the dendrite problem using a mechanical engineering approach rather than the electrochemical methods more common in battery research. Many electrochemical and microstructural phenomena are driven or accelerated by stress such as stress corrosion cracking (SCC) and the growth of tin whiskers on compressed solder films as a stress relief mechanism. The development of residual stresses in plating films and coatings is ubiquitous. The researchers designed experiments to study lithium plating on a thin copper (Cu) current collector supported by soft silicone substrates. Rigid, porous carbon substrates are commonly used in many lithium batteries.

Their initial research involved adding a layer of PDMS to the bottom of the battery anode, which resulted in “remarkable reductions” in dendrite growth. The silicone was coated with copper to provide a conductive anode substrate. The researchers noticed that “wrinkles” or deformation of the PDMS substrate occurred, which relieved the stress accumulated inside the electrodeposited lithium metal.

In later experiments, Jiang’s group also devised a way to utilize the phenomenon to extend the life of lithium-metal batteries while maintaining their high energy density. A porous silicone sponge was fabricated by infiltrating liquid silicone (PDMS) resin into a bed of sugar. After curing the silicone, the sugar was washed out with water to form a silicone foam substrate. A thin electroless copper layer was deposited on the silicone foam to provide a conductive

The research has wider applications beyond just lithium metal batteries. According to one of the researchers, ASU Professor Hanqing Jiang, “Almost all metals used as battery anodes tend to develop dendrites. For example, these findings have implications for zinc, sodium and aluminum batteries as well.”

See a Close-Up of Lithium Dendrite Growth in Batteries

By posting a comment you confirm that you have read and accept our Posting Rules and Terms of Use.
Advertisement
RELATED ARTICLES
Dendrites Detained by Li Metal Battery-Nanotube Duo
Soft but solid electrolyte extends lithium battery life
Sandwich battery offers powerful treat for EVs
See a Close-Up of Lithium Dendrite Growth in Batteries
Research Seeks to Improve Lifespan, Safety of Lithium Batteries
Advertisement