A new innovation in water purification developed by a research team at the University of Texas at Austin's Cockrell School of Engineering could have a far-reaching impact for a world where global demand for clean water outpaces its supply.

According to the United Nations, the consumption and use of unsanitary water causes the death of 30,000 people each week – with the vast majority of fatalities occurring in developing nations. Of course, the United States has its share of unanticipated water shortages, as well, especially after hurricanes, tropical storms and other natural disasters that can disrupt supplies without warning. 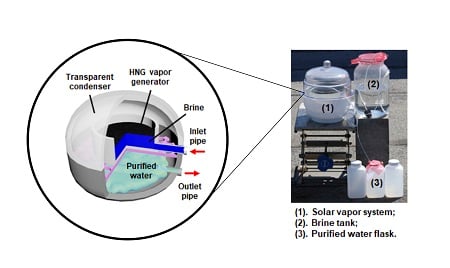 The key is a new hydrogel-based solar vapor generator which desalinates water through evaporation. Powered by ambient solar energy, it uses far less energy than existing solar technologies that rely on optical instruments to concentrate sunlight. It can also evaporate a significantly greater volume of water.

“We have essentially rewritten the entire approach to conventional solar water evaporation,” said Guihua Yu, an associate professor of materials science and mechanical engineering who served as the team lead.

“Our outdoor tests showed daily distilled water production up to 25 liters per square meter, enough for household needs and even disaster areas,” Yu continued. “Better still, the hydrogels can easily be retrofitted to replace the core components in most existing solar desalination systems, thereby eliminating the need for a complete overhaul of desalination systems already in use.”

The hydrogels are capable of filtering not only salt – one of the most difficult substances to remove from water – but also a number of other contaminants that make water unsafe to drink.

Yu believes the technology can be commercialized and is preparing his research team in anticipation of industry requests to conduct scalability tests. A patent application has also been filed.

The research was published in the journal Nature Nanotechnology.