Figure 1. Moving the three gratings of the “silicon lens” focuses neutron beams on a sample, allowing them to perceive interior details ranging in size from 1 nanometer to 10 micrometers. Source: Huber & Hanacek/NISTThe National Institute of Standards and Technology (NIST), the National Institutes of Health (NIH) and Canada’s University of Waterloo researchers teamed up to a create a new neutron interferometry method for nondestructively examining internal material structures from 1nm to 10 microns. According to Michael Huber, a physicist with NIST’s Physical Measurement Laboratory who conducts experiments at the NIST Center for Neutron Research (NCNR), the approach could make neutron interferometry into one of the best exploratory tools in a material scientist’s kit revealing internal microstructural details.

“We can look at structure on lots of different levels and at different scales,” said Huber. “It could complement other scanning techniques because its resolution is so good. It has a dramatic ability to focus, and we aren’t limited to looking at thin slices of material as with other methods—we can easily look inside a thick chunk of rock.”

Optical microscopes use glass or plastic lenses to focus light and magnify images. Electron microscopes use magnetic lenses in the form of electromagnetic coils to focus electrons. The x-ray imaging tool developed by NIST and NIH researchers focuses X-rays using “silicon lenses.” The silicon lenses are actually diffraction gratings that interact with the neutrons’ wavelike properties. The gratings split and redirect a neutron beam so that the waves bounce off the edges of the object being examined and then collide to create a visible moiré interference pattern, which scientists can interpret to determine the internal material structure. The focus is adjusted by moving the three diffraction gratings. Previous attempts to realize neutron interferometric imaging were thwarted because focusing neutrons used precise single silicon crystals, which block out most of the neutrons that strike resulting in inordinately long data collection times.

Figure 2. (a) Schematic diagram of the showing how the thrid grating is offset from the echo plane to produce the moire pattern. . A sample may be placed between the gratings for phase and dark-field imaging. (b) Writing a phase over the transverse coherence length modifies the neutron’s transverse momentum distribution and induces diffraction. Source: Sarenac et Al Physical Review Letter 120, 112201 (2018)Neutron imaging has the potential to improve our understanding of lithium batteries, catalysis layer reactions in hydrogen fuel cells, and strain within metals. A neutron microscope has the potential to nondestructively magnify an image of the internal structures in a material with an estimated 10-fold increase in spatial resolution and 100-fold increase in time resolution over what is currently possible.

Some materials that are opaque to light are transparent to neutrons such as lead and aluminum. While water is transparent to water, neutrons are blocked by the hydrogen in the water. Neutrons unique reactivity with objects compared to light makes them useful for imaging the inside workings of objects that are opaque to light such as hydrogen fuel cells. In-situ neutron interferometric microscopy could allow real-time imaging of the underlying mechanisms in fuel cells, batteries, and other materials processes. 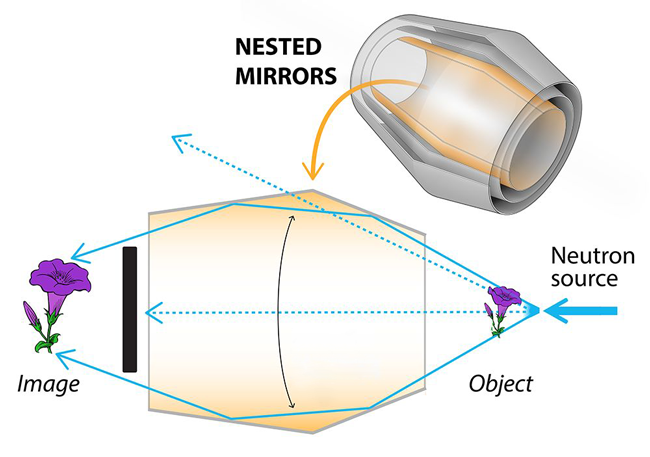 Figure 3. Diagram of a Wolter lens (top right) for neutron optics, with an inset (bottom) showing a cross section of a single mirror. Neutrons from the object hit a shell of the lens at a shallow angle for reflection (solid blue arrows) and are focused to create a magnified image of the object. Source: Sean Kelley/NIST PML

Neutrons’ ability to penetrate through most metals makes manipulating a .neutron beam difficult because they pass through most mirrors unless they hit their surface at a low angle of incidence.
NIST researchers are also working a neutron focusing lens called a Wolter optic, which consists of a series of conical mirrors made of thin layers of highly polished nickel. The neutrons will glance off a series of nickel cones at a shallow enough angle in the mirror and be focused.

The current single aperture in the neutron interferometer limits resolution. Researchers believe the neutron interferometer will become a great industrial tool after apertures with different widths are developed. According to Huber, “We can see the full range of 1 nanometers to 10 micrometers now, but the image is kind of blurry because we don’t get enough data. Every different aperture gives us another data point, and with enough points we can start doing quantitative analysis of a material’s microstructure. We’re hoping that we can get a set of maybe a hundred made, which would enable us to get detailed quantitative information.”

The new technique might also be precise enough to measure the interaction of gravity on a material and determine the gravitational constant. “We’re also hoping we can finally do that gravitational constant measurement,” Huber said. “We could put a big block of some heavy metal like tungsten nearby and see how it bends the beam. It would improve our understanding of the universe and wouldn’t take longer than our lifetimes.” 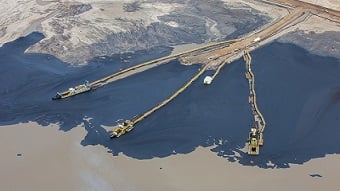 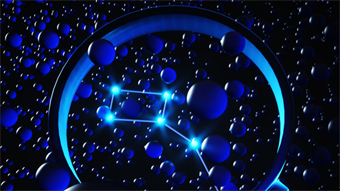