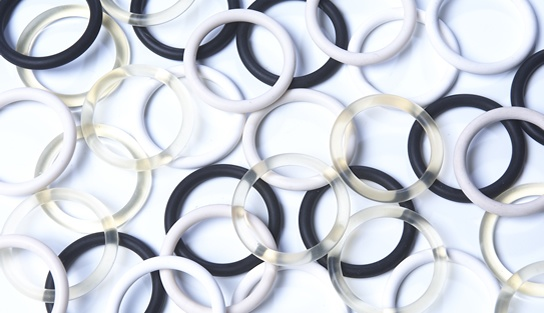 Metal ions easily diffuse through bulk silicon, along interfaces and across surfaces. Manufacturers cannot easily determine the metal source, and fab contamination investigations are extremely expensive. The killer defects from metal contamination cause reliability problems, as they are often undetected until after the device has been built into an electronic product. Metallic contamination can come from raw materials (dopants, gases, etc.) and equipment (seals, valves, etc.) as well as human engineers and technicians.

Heavy metals tend to diffuse through the semiconductor and are trapped in stressed regions such as the device junction region, which is precisely doped to a highly controlled resistivity. Trace amounts of metallic ion contaminants can change the resistivity and electrical characteristics such as carrier lifetime and mobility, impacting the device performance and yield.

Monovalent alkali metal ions can readily diffuse through the silicon dioxide (SiO2) dielectric even at room temperature. They tend to accumulate at the Si/SiO2 interface and cause unpredictable surface potentials and drift currents. The spacing between conductors has decreased with smaller node technologies, making the properties of dielectrics increasingly important to reduce RC delay, crosstalk noise and power dissipation. Alkali ions degrade the dielectric layers, causing current leakage, reduced dielectric break down voltage or even complete gate breakdown.

Figure 3 compares the purity levels of two Perlast compounds, G65HP and G67P, and a competitive semiconductor elastomer. Both G65HP and G67P have much higher purity levels compared to the competitor’s product. While the G67P elastomer has much lower trace metal levels compared to G65HP, the latter has better plasma resistance or much lower plasma erosion rates compared to G67P and the competitive A1 product (see Figure 4). The high purity of G65HP, combined with the lower erosion rates, result in less overall metal contamination in the semiconductor process chamber. 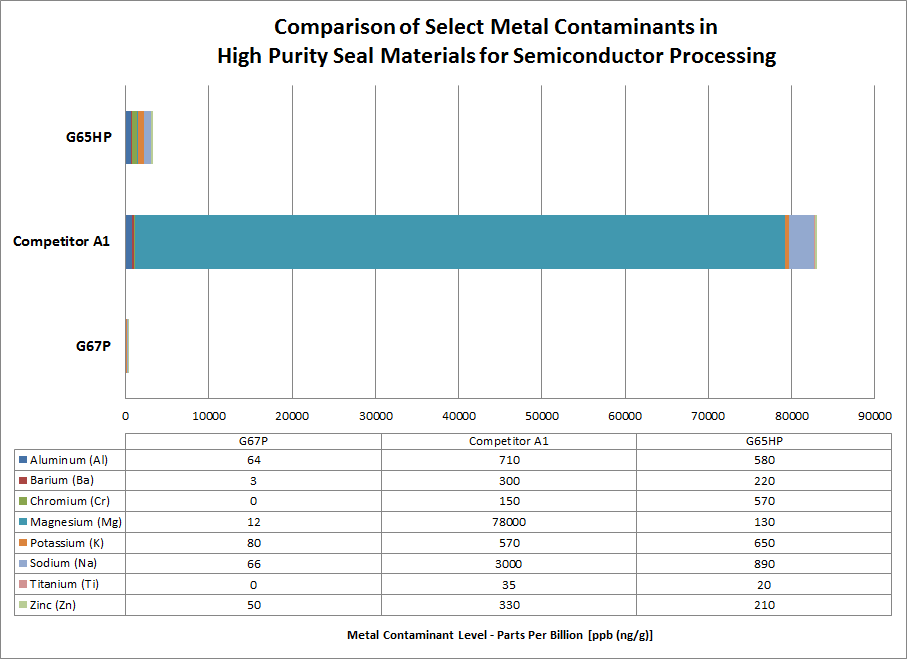 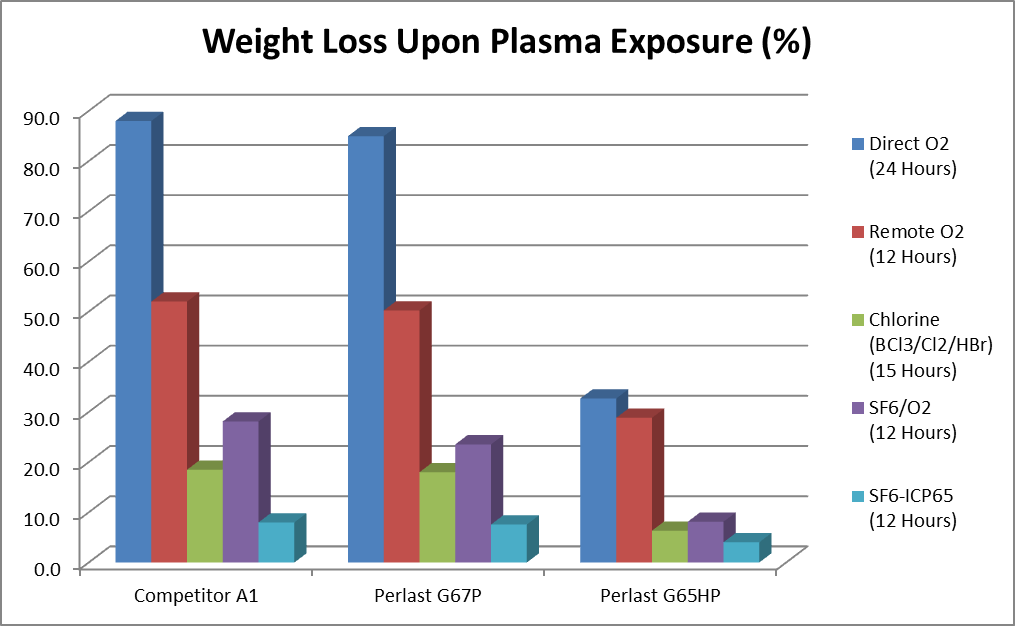 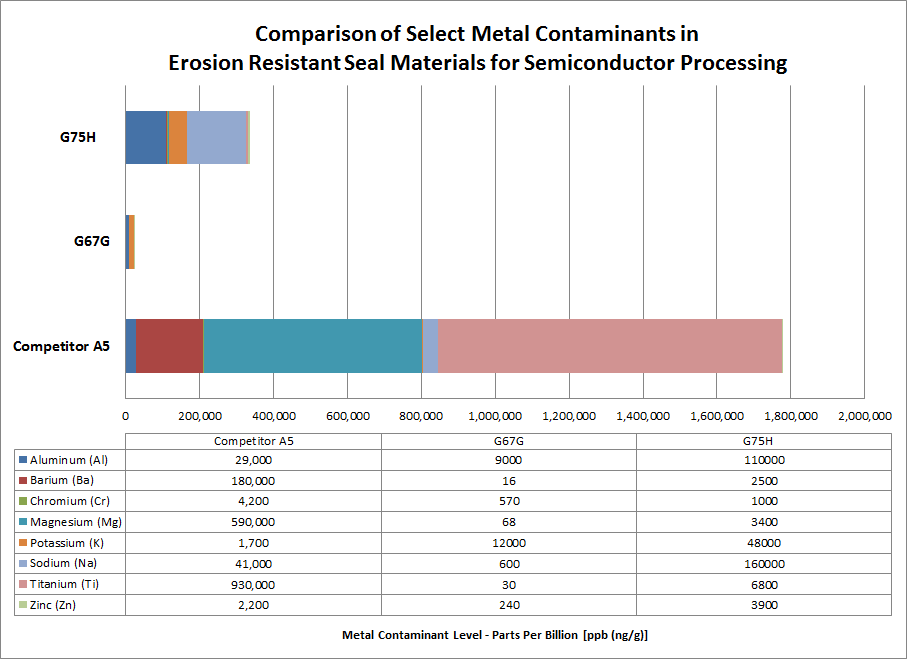 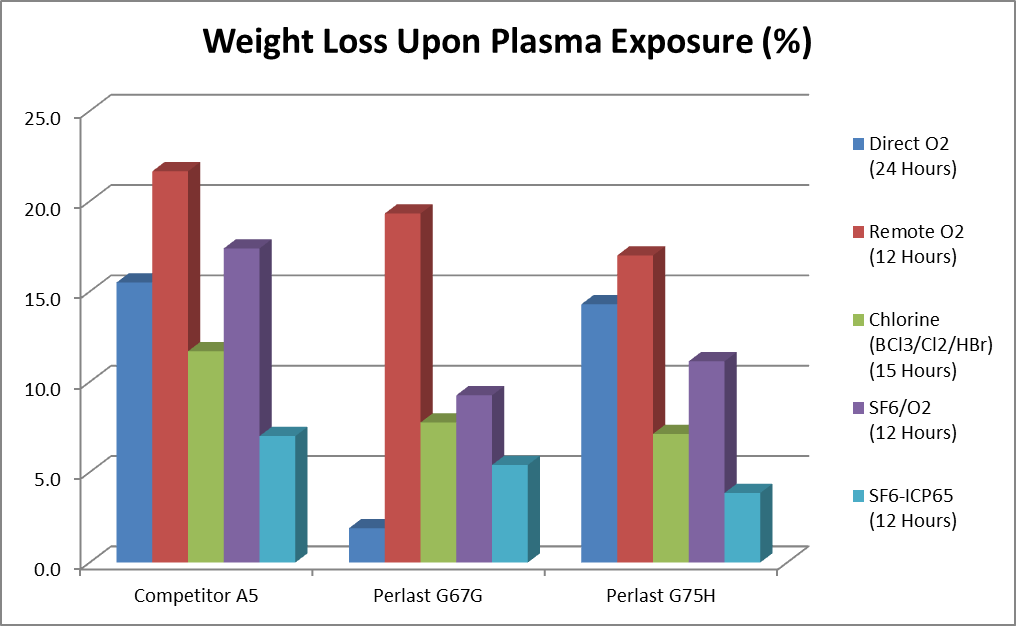 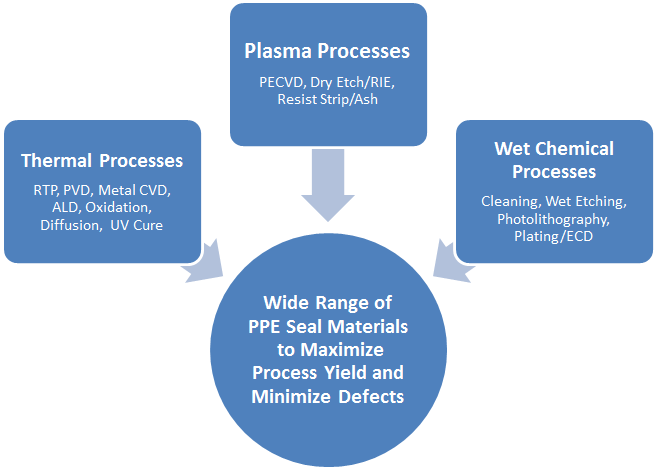 Figure 7. PPE has a wide selection of high performance seal materials to meet the demands of any semiconductor manufacturing process.

PPE has a sealing material suitable for every aspect of semiconductor fabrication including thermal, wet chemical and plasma processes. Critical metal contamination levels acceptable only a few years ago at the larger node-scale technologies are no longer viable in nanoscale semiconductor manufacturing. Semiconductor process seals must be made of ultrapure materials to reduce their contamination potential. They must also survive extreme temperatures, erosive plasmas and a mixture of fluorinated gases while providing the proper hardness, compression set and permeability for reliable sealing performance. PPE’s Application Engineering (AE) team should be consulted to determine the PPE seal materials best suited for specific semiconductor applications. The AE team supports semiconductor customers and has the ability to do simulations and FEA analysis. It provides comprehensive design service for O-rings and seals. The AE team can help optimize seal installation and assembly (e.g., groove design) and provide failure analysis to find the root cause of any problems. PPE can be your partner in developing seal materials with extended performance and properties for emerging 7 nm IC fabrication processes and beyond.

PPE’s ultrapure elastomers and exceptional service have made PPE one of the main semiconductor seal suppliers for many of the largest OEMs worldwide. Contact PPE’s application engineers today to discuss your semiconductor process applications and select the most suitable, high-performance PPE products to evaluate for your project.

By posting a comment you confirm that you have read and accept our Posting Rules and Terms of Use.
Advertisement
RELATED ARTICLES
Elastomer seals – How to avoid the trade-off between purity, plasma resistance, and high temperature performance
Advanced Elastomers Solve Old Sealing Problems, Prevent New Ones
HyClamp Hygienic Gaskets for Demanding Applications
The case for FFKM sealing in life science applications
The Challenges of Meeting Ever-evolving International Oil and Gas Sealing Requirements
Advertisement 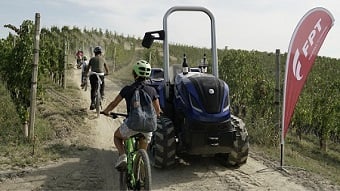 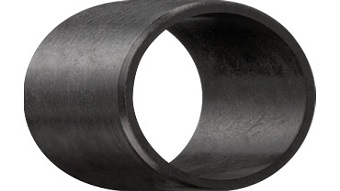