Those widely used, simple-looking O-rings, seals, and gaskets generally don’t get much respect or consideration. That’s unfortunate, because while they are barely visible or even invisible, they must absolutely seal liquids and gases in and out of critical areas, and these areas are often situated between sliding, rotating, or compressed surfaces that further complicate the challenge, Figure 1. Seal failure, often due to the operating environment, can be a costly catastrophe. 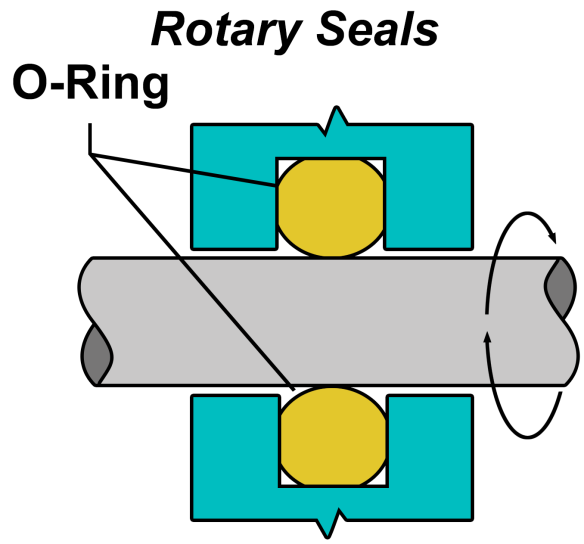 Fig. 1: O-rings play a critical role in sealing both moving and fixed interfaces between surfaces, preventing both gases, liquids and even microscopic particles from passing the barrier. (Source: Precision Polymer Engineering)

Engineers who specify these seals may assume that they need to look at only a few rubber- or polymer-based elastomeric materials. They may also assume that while there are some specialty elastomers in use, the actual material selection is fairly straightforward. Perhaps all that is needed is to do the measurements carefully, select a suitable-looking material, and then move on to other aspects of the design.

The reality is much harsher

Unfortunately, things are not that simple. The choice of material is actually a major decision, as it affects both short- and long-term performance as well as critical dimensioning of the seal itself. Issues related to the selected material can adversely affect production via both seal-material failure and user end-product contamination, with an impact on end-product quality, consistency and usability; it may even result in a contaminated and defective product batch that must be scrapped. 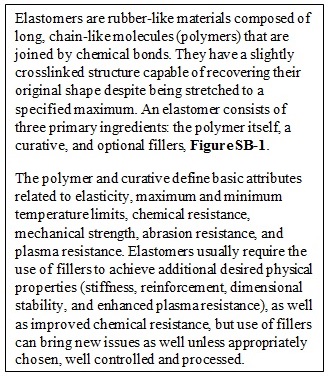 For example, it’s no secret that for today’s billion-dollar semiconductor fab facilities, any ingress of undesired gas or particles will “poison” the required ultrapure process environment, so seal integrity is critical, of course. But what about the seal itself? Will it withstand the harsh chemical, thermal, and mechanical environment to which it is exposed? Will it inadvertently contaminate the production environment due to various types of nearly invisible deterioration, which often will occur slowly and almost without notice rather than as a dramatic, early incident?

These questions drive the need for a more in-depth look at seal materials. While many standard, specialized seal materials are available [see sidebar, “Basics of elastomer materials”], the right choice in advanced applications often requires an experienced vendor with broad and deep application expertise, supported by sophisticated materials.

A few examples show how the availability and proper selection of advanced materials and understanding can make the difference between a successful, high-yield production run and a ruined batch: 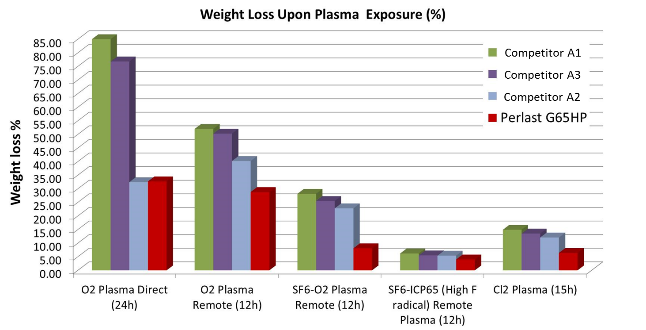 Among these is a high-speed, streaming glow discharge of a gas mixture called plasma used at various stages of fabrication and processing for wafer etching or cleaning, or enhancing the results of various fab-process steps. This plasma can be created via remote, high-energy microwaves that ionize the gas, as well as other techniques. For example, a high concentration of fluorine-radical plasma is typically used for chamber cleaning using NF3; other etchants include SF6/O2 and chlorine (Cl2/BCl3/HBr).

Each of these is extremely corrosive to the seal material and all plasmas do not have the same effect, so no one seal is best for everything. As the seal degrades, its particles or degradation by-products can migrate into the chamber and contaminate it (degradation is determined by weight loss of the seal, Figure 2, if the sealing material is not designed for critical semiconductor applications). 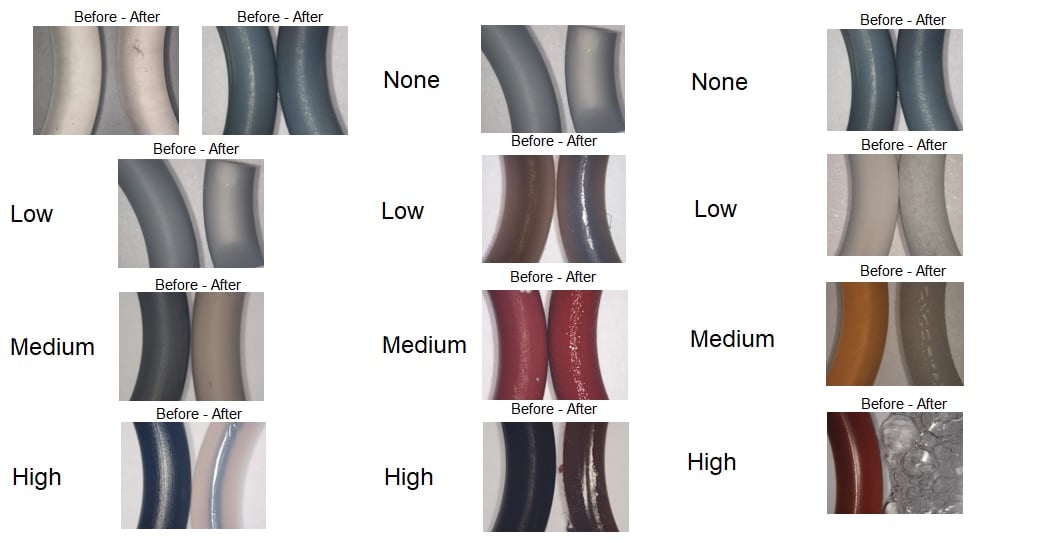 Fig. 3: Exposure to ultraviolet radiation and ozone (O3) can cause changes in elastomer color, stickiness, and physical dimensions ranging from moderate to severe, each of which compromises performance. (Source: “Precision Polymer Engineering Critical Sealing Solutions, April 2017” PowerPoint, slides 34, 35, and 36)Example #2: Ultraviolet (UV) and ozone (O3) resistance is another important consideration. UV is used for several reasons in IC fabrication: it increases the stress of the CESL (contact etch stop layer), which leads to improved carrier mobility within the silicon channel of the transistor; it introduces a controlled porosity within the dielectric layer, which reduces the dielectric constant and so leads to reduced crosstalk between closely spaced interconnections; and it leads to lower power consumption. Exposure to UV/O3 results in changes in elastomer material color, sticking, physical appearance, and overall erosion, all of which are indicators of undesired changes in performance, Figure 3.

While common carbon black is a very good UV absorber, it is not suitable for most critical semiconductor applications due to its lack of cleanliness and unavoidable presence of particulates. FFKMs and FKMs from PPE performed far better than competitors, Figure 4, 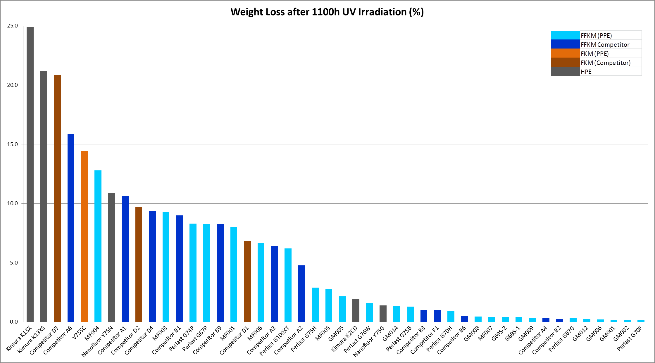 Again, advanced polymers from PPE are engineered for these situations. These ultrahigh-purity FFKM elastomers withstand concentrations of fluorine and chlorine, combining a fluorinated polymer backbone with a highly fluorinated cross-linking system that also features resistance to the high temperatures of these applications. The low erosion rate of the fully organic structure (no inorganic filler) of this material and its extremely low trace-metal content are among the factors that largely eliminate the risk of particle and trace metal contamination and therefore increase the yield of the plasma processes.

Example #3: Electrostatic discharge (ESD) is another issue. Caused by what is commonly called “static electricity”—is the result of charge buildup associated with rubbing or multiple contacts of dissimilar, non-conducting materials. It eventually reaches a voltage potential that is high enough to initiate a discharge of the accumulated charge.

It’s a problem in semiconductor integrated circuit (IC) manufacturing, as even a modest-magnitude discharge spark can destroy sensitive circuit elements such as transistors. It’s also a problem that is getting worse. As IC feature size shrinks to the nanometer range, sensitivity to destruction due to discharge increases.

The conventional solution is to ensure that all ESD-producing locations use conducting rather than insulating materials, in order to dissipate any charge accumulation, which could lead to a spark. Unfortunately, a typical elastomer is an insulator, and so the obvious approach is to make the material dissipative by adding microscopic metallic particles within the elastomer; however, these particles can also break free and cause contamination.

What is needed instead is something that is dissipative yet that does not require use of metallic particles as filler. Fortunately, fluoroelastomer (FKM) and perfluoroelastomer (FFKM) polymers have been developed by Precision Polymer Engineering (PPE), which meet the needs of wafer-processing and handling applications, and

Fig. 5: Energy dispersive X-ray spectroscopy (EDX) analysis on Perlast G90DM and V90DM polymer types shows a complete absence of metallic-based filler and an entirely organic composition. (Source: Tech Paper TO00114, “Electrostatic Discharge in Semiconductor Manufacturing” Fig 1 and Fig 2)which have an entirely organic composition, Figure 5. Their low surface- and volume-resistance values (between 1 × 104 Ω and 1 × 1011 Ω) create a low-leakage path to avoid charge build-up on the material itself. Note that these FKM and FFKM elastomers are not restricted to EDS-sensitive applications, but are widely used in many other situations, as they have wide applicability as insulating materials where ESD is not a major concern.

A high-performance vendor does more than just develop, manufacture, and deliver leading-edge materials that support an application. The vendor must also work closely with OEM customers to guide designers on which material to use and the impact of changes in selection.

For example, if one material proves inadequate, it seems simple enough to change to another material using the same initial dimensions. However, the replacement may have a different coefficient of thermal expansion, so the replacement may undergo different dimensional changes under the same circumstances in actual use due to thermal and environmental effects.

Other top-tier vendor responsibilities include fully proving any new materials, as application qualification of new elastomer materials is potentially a high-risk and expensive process for both fab designers and the OEMs who develop their incredibly complex systems. The risk is greatest where elastomer parts are in critical tool locations, exposed to hostile chemistry and radiation in areas where the substrates are processed.

Figure SB-1. For customers, PPE provides risk reduction through ongoing programs, which include assessment of seal material in production scenarios that closely simulate conditions at fab/OEM end users, detailed data comparing chemical analysis and compatibility for a wide range of materials, and in-depth tests that compare performance among all major elastomer brands.

PPE is vertically integrated, thus providing control over the total process from design to material compounding to manufacturing. The extensive chemical testing and benchmarking gives PPE a strong platform for recommending correct materials to users, which results in saved time and effort needed to qualify selection, and lowers the risk of suboptimal material choice.

PPE’s Perlast and Nanofluor grades lead in low content of trace metals (just look at the Periodic Table of the Elements to see how many there are!); these are a major source of yield loss in production. It isn’t just about material and chemistry, either, as PPE provides guidance on seal matching of best material and size via finite element analysis (FEA).

Equally important, PPE’s approach to materials development is more than just material science. It also includes cleanliness with clean-room facilities for compounding and molding, as well as special cleaning/bagging facilities; a dedication to low trace-Metal Content via use of pure polymers and their ingredients, along with ultra-clean production/handling facilities; and the formulation expertise needed to ensure almost unmeasurably low levels of generation of undesired elements.

By posting a comment you confirm that you have read and accept our Posting Rules and Terms of Use.
Advertisement
RELATED ARTICLES
Purity of Elastomer Sealing Materials for Semiconductor Manufacturing
Elastomer seals – How to avoid the trade-off between purity, plasma resistance, and high temperature performance
Designing with inflatable seals
The Challenges of Meeting Ever-evolving International Oil and Gas Sealing Requirements
HyClamp Hygienic Gaskets for Demanding Applications
Advertisement