Self-driving cars will need the ability to react to unexpected road hazards – for instance, a child's ball rolling onto a street, just beyond the corner of a sharp turn. Stanford researchers are currently developing laser-based imaging technology that will provide that ability; applications include autonomous vehicles, aerial surveillance and even search-and-rescue operations.

The system bounces lasers around corners to produce images of objects hidden from view – what Gordon Wetzstein, electrical engineering assistant professor and senior author of a recently published paper on the research, calls "non-line-of-sight imaging."

This type of imaging is being developed by others as well – what sets the Stanford research apart is the efficiency and effectiveness of the algorithm developed for final image processing.

“A substantial challenge in non-line-of-sight imaging is figuring out an efficient way to recover the 3-D structure of the hidden object from the noisy measurements,” explains David Lindell, graduate student in the Stanford Computational Imaging Lab and co-author of the paper. “I think the big impact of this method is how computationally efficient it is.” 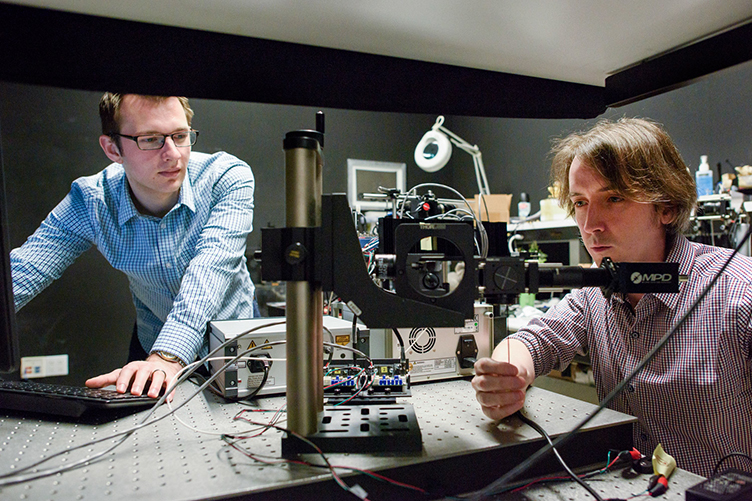 In the Stanford system, bounced laser pulses are sent to a highly-sensitive photon detector that can scan individual particles of light; an algorithm then transforms the captured photon paths from a blurry blob to a much sharper image. While the scan currently takes between two minutes and an hour, depending on conditions such as lighting and hidden object reflectivity, the algorithm completes its processing in less than a second. And it's so efficient that it can run on a standard laptop.

Before the system is road-ready, it will need to work better in daylight and with objects in motion. The team is continuing to work on this system so it can better handle the variability of the real world and complete the scan more quickly. At present, the system performs particularly well with retroreflective objects such as safety apparel and traffic signs. The researchers say that if the technology were placed on a car today, that car could easily detect things like road signs, safety vests or road markers – but might struggle with a person wearing non-reflective clothing.

The research was published in the March 5 edition of Nature.