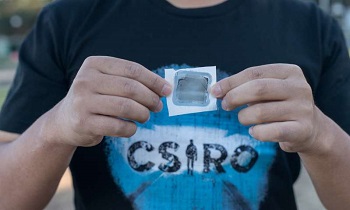 The researchers collected samples from the harbor and ran them through a commercially available water filter coated with Graphair. After a 72-hour treatment period, the samples were analyzed and demonstrated to be safe to ingest.

The low-cost graphene film is synthesized via a single-step, ambient-air chemical vapor deposition process derived using renewable sources such as soybean oil. Graphene film is then directly used as an active layer in membrane distillation and exhibits high rates of water vapor flux, excellent salt rejection, long-term stability and sustained antifouling even in the presence of water contaminants.

The commercial membrane filter achieved 99 percent removal with the addition of Graphair.

By posting a comment you confirm that you have read and accept our Posting Rules and Terms of Use.
Advertisement
RELATED ARTICLES
Stamp-Sized Graphene Could Filter Specific Molecules in Healthcare Technologies
Graphene Membrane Advances Desalinization Technology
Watch a Self-Healing Liquid Membrane
Desalination Material Filters 70% More Water Than Graphene
Got Soybeans? Make Graphene
Advertisement