University of Illinois engineers have found an energy-efficient material for removing salt from seawater that could reduce the costs associated with desalination.

The material, a nanometer-thick sheet of molybdenum disulfide (MoS2) riddled with tiny holes called nanopores, is designed to let high volumes of water through, but keep salt and other contaminates out. The research team, led by Narayana Aluru, a professor of mechanical science and engineering, modeled thin-film membranes and found that MoS2 showed the greatest efficiency, filtering up to 70% more water than graphene membranes. 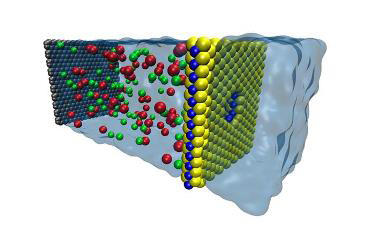 Computer model of a nanopore in a single-layer sheet of molybdenum disulfide shows that high volumes of water can pass through the pore using less pressure. Image credit: Mohammad Heiranian. The researchers say that most available desalination technologies rely on a process called reverse osmosis to push seawater through a thin plastic membrane to make fresh water. The membrane has holes that are small enough to prevent salt or dirt from passing, but large enough to let water through.

"Reverse osmosis is a very expensive process," Aluru says. "A lot of power is required to do this process, and it's not very efficient.” What is more, the membranes sometimes fail because of clogging.

One way to increase the water flow is to make the membrane thinner, because the required force is proportional to the membrane thickness. Researchers have been looking at nanometer-thin membranes such as graphene. However, graphene presents its own challenges in the way it interacts with water, the Illinois researcher say.

Aluru's group has previously studied MoS2 nanopores as a platform for DNA sequencing and decided to explore its properties for water desalination. Using a supercomputer, they found that a single-layer sheet of MoS2 outperformed its competitors thanks to a combination of thinness, pore geometry and chemical properties.

A MoS2 molecule has one molybdenum atom between two sulfur atoms. A sheet of MoS2, then, has sulfur coating on either side with the molybdenum in the center. The researchers found that creating a pore in the sheet that left an exposed ring of molybdenum around the center of the pore created a nozzle-like shape that drew water through the pore.

"MoS2 has inherent advantages in that the molybdenum in the center attracts water, then the sulfur on the other side pushes it away, so we have [a] much higher rate of water going through the pore," says graduate student Mohammad Heiranian. "It's inherent in the chemistry of MoS2 and the geometry of the pore, so we don't have to functionalize the pore, which is a very complex process with graphene."

In addition to the chemical properties, the single-layer sheets of MoS2 have the advantage of thinness, requiring less energy, which in turn reduces operating costs. MoS2 is a robust material, so even a thin sheet is able to withstand the necessary pressures and water volumes.

The Illinois researchers are establishing collaborations to experimentally test MoS2 for water desalination and to test its rate of fouling, or clogging of the pores. MoS2 is a relatively new material, but the researchers believe that manufacturing techniques will improve as its performance becomes more sought-after for various applications.

By posting a comment you confirm that you have read and accept our Posting Rules and Terms of Use.
Advertisement
RELATED ARTICLES
Desalination Devices Made with 2D Materials
Control over water friction via 2D materials could lead to 'smart membranes'
Decontaminating water with an inexpensive new material
Graphene Membrane Advances Desalinization Technology
Device generates 5 V of electricity from one tiny droplet of water
Advertisement