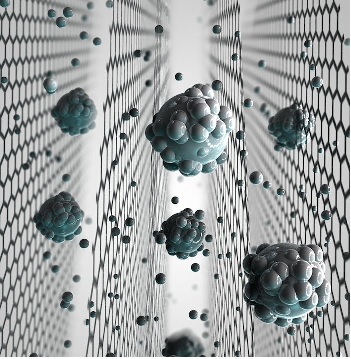 A newly-developed graphene-oxide membrane precisely controls the membrane’s pore size, allowing the membrane to filter out salts found in seawater. This technological breakthrough is a significant step toward improving the efficiency and affordability of desalination technology.

A group of scientists at the University of Manchester’s National Graphene Institute reported this advance in the journal Nature Nanotechnology.

Previous research at Manchester demonstrated the effectiveness of graphene membranes as filters for larger ions and molecules. Smaller molecules, like salts, flow through because water induces the membrane to swell slightly.

The new membrane works by exploiting the behavior of salts dissolved in water. The salts form a “shell” of water molecules around the salt molecules, allowing the tiny graphene capillaries to block the salt from flowing along with the water. Plain water molecules pass through without a problem.

Professor Rahul Nair, of the University of Manchester said: “Realization of scalable membranes with uniform pore size down to atomic scale is a significant step forward and will open new possibilities for improving the efficiency of desalination technology.

In addition to desalinization, these membranes, with their atomic-scale tenability, provide the technology to design filtration systems for ions and molecules of specific sizes.

By posting a comment you confirm that you have read and accept our Posting Rules and Terms of Use.
Advertisement
RELATED ARTICLES
Graphene Membranes for Cleaner Water
Control over water friction via 2D materials could lead to 'smart membranes'
Block Polymer Membranes Boost Desalination Efficiency
Video: Roll-to-Roll Manufacturing of Graphene
Desalination Material Filters 70% More Water Than Graphene
Advertisement