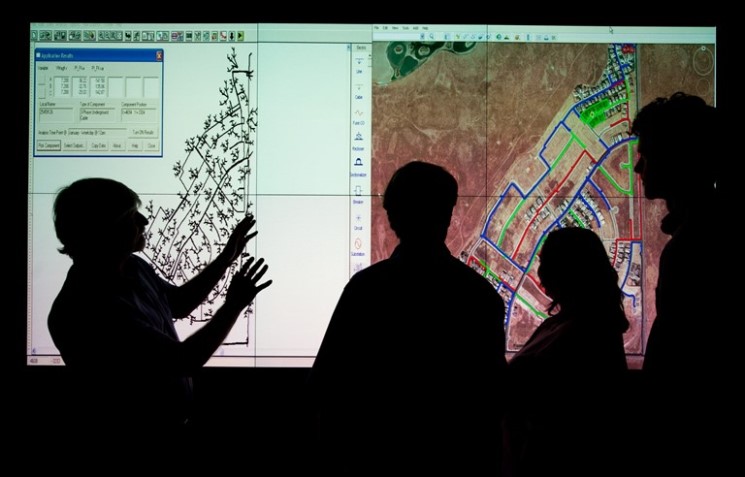 Potentially serious problems face national electric grids. The need for power continues to grow, placing a strain on the existing generation infrastructure, transmission lines as well as power plants. In many parts of the world, the possibility of blackouts is a constant threat.

To avoid power failure during periods of high demand such as in the middle of the afternoon on a hot summer day, a utility might call for power from other systems on the grid or hold back power they are exporting elsewhere. This, however, might cause a cascading series of failures, such as the 2003 blackout in the U.S., which affected 55 million people, or the 2012 blackout in India, which affected 620 million.

Another solution is to build peaking power plants that run only during periods of high demand when high power prices justify their existence. The downside, however, is that these expensive assets typically sit idle for much of the year.

Grid-connected microgrids can help solve these problems either by providing power to the utility grid or by removing load from the grid during periods of high demand. Microgrids also can disconnect from the grid in the event of a blackout. In this way they can continue to supply power to critical facilities such as a hospital, research lab or data center, as well as residential complexes, educational and industrial campuses or commercial districts.

Another problem is the need to reduce carbon emissions to meet local, national and even international emissions goals. A logical answer is to increase the use of renewable non-polluting energy sources such as wind, solar and small-scale hydro. Microgrids are an efficient means of incorporating a variety of technologies, including renewables.

Together, these factors are expected to motivate significant growth for microgrids. One report predicts that annual revenue from implementing them is expected to rise from $2.4 billion in 2014 to $5.8 billion in 2023, and that the worldwide installed capacity will rise from 4.4 GW in 2014 to more than double that by 2020.

IHS Technology forecasts that distributed photovoltaic (DPV) systems—those sized 100 kilowatts (kW) or smaller—will account for 30% of global installations in 2015, with 15.7 GW projected, an increase from 13.2 GW in 2014. The largest market for these installations in 2015 is expected to be Japan, with DPV accounting for nearly 70% of installations. IHS also expects the U.S. to install more than 2.2 GW of DPV in 2015.

An extensive literature offers a variety of definitions for the term "microgrid." One useful definition comes from the March 2014 article “Microgrids Help More Than They Hurt" by Chiesa and Zirkelbach and published in IEEE Electrification Magazine. The authors offer five characteristics of a microgrid.

The heart of any microgrid is an independent source of electrical energy, not derived from the utility. According to a Sandia National Laboratory report,the most widely used of the distributed resources today are diesel generators and combined heat and power (CHP) technology, also called cogeneration. Other sources are solar, wind, micro-hydropower, fuel cells, and biomass. Ocean tidal and in-stream turbines are nearing commercialization, but are not yet there. 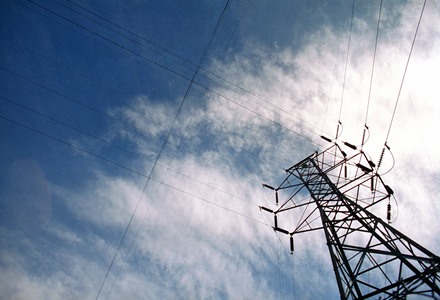 Grid-connected microgrids can provide power to the utility or remove load from the grid during periods of high demand. Image source: NREL, credit Al PuenteThere can be more than one source, the same or a mixture of types, connected to the system. However, each distributed energy resource (DER) has different characteristics that have to be reconciled so that they can be combined in a common power network. Since for grid-connected systems, the most common distribution network is line frequency AC, all sources must be controlled to synchronize voltage, frequency and power factor.

CHP systems use waste heat from steam boilers or industrial processing to drive a synchronous generator. The generator can be controlled to produce a constant output voltage by using an automatic voltage regulator (AVR) that controls the excitation current in combination with a governor. The AC output must be matched to the grid distribution system, and in the case of grid-connected systems, also to the utility power.

Photovoltaic (PV) panels generate DC power that must be converted to AC. Electronic inverter circuits convert the DC to AC and regulate the output to match the other sources on the microgrid. The power output of PV cells changes with the intensity of solar radiation during the course of a day and night in a predictable way but it can also have unpredictable swings caused by passing clouds, rain and snow, and even blowing tree leaves. In order for solar PV to be used on an isolated microgrid, it must therefore use a storage device. There are however, a limited number of practical storage devices for PV. Batteries are the most common means but fuel cell systems are also being developed for this application.

Wind turbines generate AC power directly, but its quality—amplitude and frequency—is not stable enough for the grid. A double-ended inverter converts the AC output of the turbine to DC and then to grid-compatible AC. The electronic inverter controls the frequency and power factor of the power connected to the grid. Since wind speeds vary throughout the course of a day and night, wind turbines also need storage.

Communication and control are vital for coordinating the different sources on the microgrid. Each unique source is controlled individually according to its characteristics. Ideally the devices that control the outputs of the various sources are networked together in a SCADA (supervisory control and data acquisition) system. In addition to balancing the sources, the system must sense the various loads and adjust the DERs to accommodate changes in loading. There are generally times of maximum and minimum demand throughout any 24-hour period. There might be a different pattern on weekends and depending on location, over the course of a year.

There are two approaches to the power control requirements: a centralized master control system or a distributed system based on peer-to-peer communication. With the peer-to-peer approach each source can have a controller designed for its particular characteristics, for example its inherent time constant or ability to provide current peaks for inductive loads. A distributed control system is much more flexible. If one generator or one controller fails and needs to be taken off line, the rest of the microgrid can continue to function, at reduced output if necessary. Another advantage is that although each controller can be uniquely programmed for its particular generator, it can function as an independent node integrated with the other controllers through the peer-to-peer SCADA network.

If a microgrid is tied to the utility grid it must be done through what is called a point of common coupling (PCC) so that the microgrid will appear to the utility grid as though it were a single load. This adds further complications to the system of control and communication. There has to be a means of measuring and coordinating voltage, frequency, and VAR on both sides of the PCC. Connecting and disconnecting can be done with different methods. The most important consideration is that when the two grids are connected or disconnected neither side of the PCC will be disturbed beyond certain narrow limits.

Making and breaking the connection can be done using relay controlled circuit breakers. This has the advantage of providing overload protection in addition to the switching function. One problem with this method is that it is relatively slow, on the order of 3-6 cycles for a total disconnect. It is also impossible to control the power flow through the PCC. If the circuit breaker trips, the disconnect will be uncontrolled and will cause disruption, especially to the microgrid. 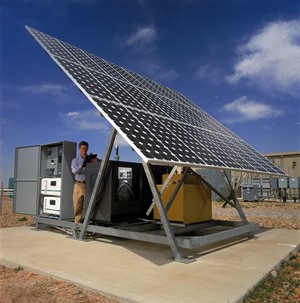 A stand-alone PV panel with inverters and diesel generator. Image source: NREL, credit Jim Yost Static transfer switches use SCRs or IGBTs instead of mechanical contacts. They act more quickly than circuit breakers—in less than one cycle. Although they are more expensive than circuit breakers, they have a longer life in terms of number of operations. However there is some power dissipation because of the forward voltage drop during full conduction. They also cannot control the power flow through the PCC. For redundant safety they are often used in combination with a circuit breaker to provide complete physical isolation as well as a bypass switch so the device can be removed for servicing.

Power electronic interfaces may be the highest cost option, but it's also perhaps the most flexible. Its advantages over the other means are that it allows for two different power distribution architectures on either side of the PCC and it can control real and reactive power flow. This too is generally used in conjunction with a circuit breaker for complete physical isolation and also generally includes a bypass switch for maintenance. Since it uses solid-state circuitry, it dissipates some power because of its finite forward voltage drop.

A microgrid can be designed to operate from a mix of different sources that compensate for each other. For example, a wind turbine could be programmed to run at increased output overnight when there is no PV energy. This eases the load on storage devices.

If one source fails, it can be disconnected from the microgrid, and an equivalent proportion of the load could be shed. The remainder of the grid would therefore still be able to function, although at reduced capacity, while a repair is being made.

Since the loads on a microgrid are more predictable than on the utility grid, it is possible to use the SCADA system to program the sources to closely follow expected time-varying load patterns.

The costs of building the microgrid can be partially offset by using excess available capacity that is not needed during times of lighter loading to sell power back to the utility.

If there is a power failure on the utility grid, the microgrid can automatically disconnect from it and continue to function. A failed microgrid could be isolated so its effects will not spread beyond its boundaries.

During periods of peak demand on the utility, the microgrid can disconnect and function in islanded mode, thereby removing its load from the grid. This can be triggered by a signal from the utility, or a smart grid, or it can be pre-programmed by time-of-day, day of the week, or season of the year.

A permanently islanded microgrid can bring electrification to areas far from a utility grid, such as a remote village in Africa or India, or a rural farm anywhere. It could also be used for a field research site or a military installation. It can take advantage of locally available resources, for example, solar energy in the middle of a desert.

As Chiesa and Zirkelbach put it, utilities could lose some of their revenue through reduced demand from microgrid customers. However what utilities gain, is customers who can reduce their peak load. "Customers," they say, "can help the utility reduce the stress on the grid at crucial times."

By posting a comment you confirm that you have read and accept our Posting Rules and Terms of Use.
Advertisement
RELATED ARTICLES
Micro Grids Can Solve Macro Problems—Part 2
ComEd to Build Microgrid, Study It for a Decade
Empire State Plaza Microgrid Vies for NY Prize
Ameren Microgrid Enters Service
Energy management in microgrids
Advertisement