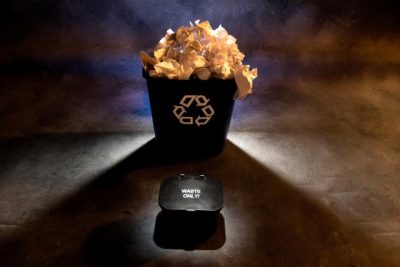 “The UI is among universities and businesses across the country using Tiny Trash as a strategy to increase recycling and reduce landfill waste,” said Sara Maples, interim director in the Office of Sustainability. “The program engages faculty, staff, and students who are regularly on campus and plays a significant role in the UI’s waste-diversion goal.”

“If you have a recycling bin this big, and Tiny Trash is much smaller, then when your recycling bin is full, you’ll empty it. By making the recycling container bigger and the trash smaller, it changes your behavior,” said Beth MacKenzie, recycling coordinator in the Office of Sustainability.

Using the UI Center for Disabilities and Development as an example of the success of the initiative, Mackenzie explained that in the months before adopting the program in May 2017, the center’s average monthly recycling rate was 26 percent. That number has increased to 46 percent since adopting the initiative.

The university hopes to expand the effort, which was first launched by the UI office of Sustainability in 2013, campus-wide.

By posting a comment you confirm that you have read and accept our Posting Rules and Terms of Use.
Advertisement
RELATED ARTICLES
PureCycle, iSustain Recycling introduce PureZero to the Plastics Recycling Conference
This prototype robot from Alphabet sorts trash for recycling
Waste Plastic Recycling Faces Market Headwinds
Smart Campus Technology Implemented at Company Headquarters
British Airways to Fly on Fuel from Waste
Advertisement