Plastics are almost fully derived from petrochemicals produced through the use of fossil oil and natural gas. Naphtha, ethane, propane, and other gases are used as feedstocks for steam crackers that produce olefins (ethylene, propylene, and butadiene) and aromatics (benzene, toluene, and xylenes). These make up the building blocks of most plastics.

A plastic material, according to the Society of the Plastics Industry, is any material that consists wholly or on part of combinations of carbon with oxygen, hydrogen, nitrogen and other organic or inorganic elements, and that is solid in its finished state. In common usage, the terms plastics, polymers and resins are roughly the same. 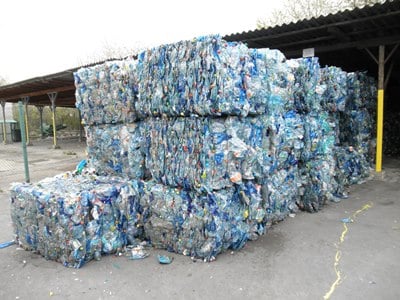 Bales of crushed PET bottles. Image source: wikimedia.orgWaste occurs in the producing, converting and consuming plastics and like materials. As a result, recycling has found firm ground across Europe in particular, with several regulations in place in an effort to ensure a reasonable recycling rate for waste streams such as end-of-life packaging, automotive waste and electrical waste. The major classes of plastics that are recycled include: polyethylene terephthalate (PET), high-density polyethylene (HDPE), expandable polystyrene (EPS), and polypropylene (PP).

The plastics industry has evolved over the past decades, sparked by population growth and higher standards of living. The world’s annual consumption of plastic material has grown from around 5 million tons in the 1950s to nearly 100 million tons at present.

“The plastics industry does indeed try to push for ‘green initiatives’, but today’s cheap price of oil has made it where those companies want to be ever more profitable,” says Ormonde. Large companies that consume plastics, for example, Nestle and Procter & Gamble, try to use a percentage of recycled materials in their products.

Although initiatives from major companies to use recycled plastics may be inspirational, life duration of most plastic waste is not long; approximately, 40% have a life-cycle of less than 30 days. This results in a waste stream that may create an environmental problem. Nowadays, such waste streams are typically handled by incineration (with some energy recovery) or by land-filling.

Land-filling, however is becoming less desirable as some governments demand that waste destined to landfills be reduced in coming years. For example, directive 2008/98/EC of the European parliament states that by 2020 all solid waste streams (including plastics) should be diverted toward thermal and/or mechanical treatment and energy recovery.

One option to landfill could transform consumer plastics wastes into fuels and chemical intermediates. However, says Ormonde, these technologies are too expensive in today’s oil price environment. Hence, plastic recycling is often seen as the next best option.

Material recycling is also an option. In this case, the plastic’s chemical structure is not changed for a new application. Two processes, however, do involve changing the chemical structure: chemical recycling and feedstock recycling. The former reuses the material in such a way that the resulting component chemicals can be used to reproduce the original plastic. The latter reuses the material in order to produce chemicals for some purpose other than reproducing the original plastic.

How a plastic is recycled depends on its underlying properties. Plastics are classified according to their chemical composition (what are their building blocks?), chemical structure (what is their molecular geometry: linear, branched or crosslinked?), stiffness (are they elastic, flexible or rigid?), the type of application (do they have a general purpose use or are they a specialty plastic?), and processing method (how are they made?).

In general, plastics in waste streams that can't be subject to material recycling are processed through chemical recycling. Doing so maximizes the yield of potentially valuable gaseous and/or liquid products while helping to keep operating costs below revenues and investment costs at a minimum.

The plastics recycling industry has faced several challenges in the last year-and-a half, says Ormonde. First, there has been an excess of global production of crude oil, iron ore and plastics. Second, the strong dollar has hurt the competitiveness of scrap material, leading to weak demand, particularly in China, which has been experiencing slower economic growth. A third factor is falling commodity prices, including for plastics and other materials.

Moreover, a trend that has been hurting the plastics recycling industry is the relatively low price of oil. Because of it, “virgin raw material plastic is favored over recycled plastic material,” says Ormonde.

One positive trend is that plastics recyclers at all levels are trying to physically sort material more efficiently and enhance their processes and handling. Given all these factors, Ormonde advises plastic recyclers to focus on operational efficiency, quality and product diversification.

How the public perceives plastic recycling depends on the country and region. Ormonde says that in general, the public want to participate in plastics recycling, and also want to learn about plastics recycling, especially from curbside-to-material recycling facility (MRF), which sorts, separates and processes trash for recycling. Companies such as Waste Management in the United States try to make residents aware of sorting materials at home/curbside so sorting becomes easier at the MRF. MRF materials are sorted either manually or mechanically; machines usually make the sorting process easier and increase the output.

Some plastic recycling schemes are endorsed by local governments. For instance, Recovinyl is a European scheme that provides financial incentives to encourage collecting Polyvinyl chloride (PVC) waste. Another scheme is the Recofloor, which was founded in 2009 by flooring manufacturers Altro and Polyflor, with the goal of collecting waste vinyl flooring and recycling it to create new flooring. A final initiative is the VinylPlus program of the European PVC industry, which has a target to create a long-term sustainability framework for the entire PVC value chain.

By posting a comment you confirm that you have read and accept our Posting Rules and Terms of Use.
Advertisement
RELATED ARTICLES
PureCycle, iSustain Recycling introduce PureZero to the Plastics Recycling Conference
This plastic material is made to be recycled
Neste to Use Waste Plastic for Fuel and Plastic Production
Plastic's global environmental toll
Smart recycling equipment learns to identify plastic types
Advertisement