Four Aerospace Developments to Look for in 2018

The year ahead will be filled with a number of exciting aerospace developments. From Virgin Orbit’s new small satellite launching rocket to a stratosphere-breaching solar-powered aircraft, 2018 has a busy launch schedule filled with flight tests and product rollouts. 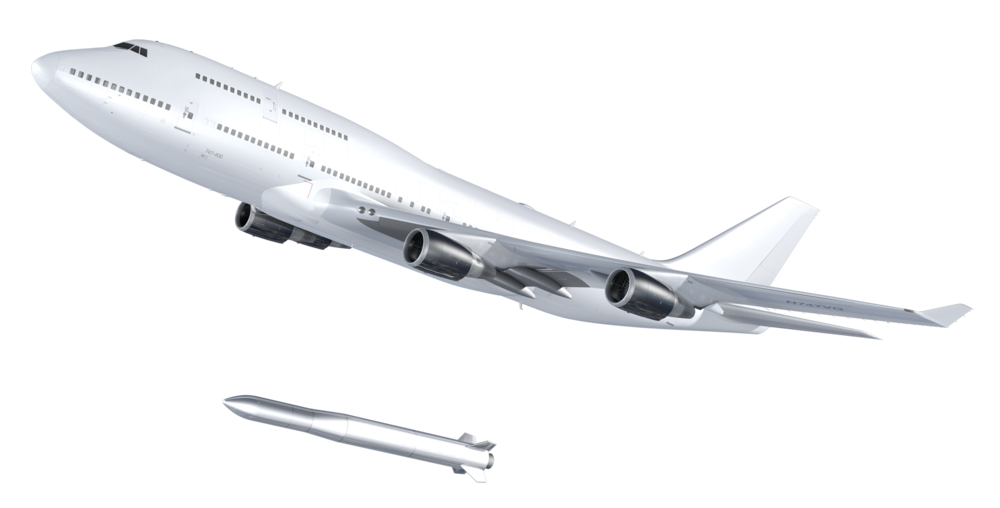 Virgin Orbit, a spinoff of Virgin Galactic and part of the Virgin Group, will test its rocket-launching plane and LauncherOne rocket in 2018. Designed to carry small satellites into sun-synchronous orbit, LauncherOne will be capable of lifting a 660 lb (300 kg) payload to an altitude of 310 miles (500 km).

LauncherOne is an air launch rocket designed to be carried into the sky by a 747-400 airplane. Mounted to a pylon between the left inboard jet engine and the fuselage, the rocket will be carried to an altitude of 35,000 feet (10,700 meters) before it is released.

LauncherOne will then fire its stage one NewtonThree engine, burning LOX/RP-1 fuel and generating 73,500 pounds (327,000 newtons) of thrust for around three minutes before stage separation.

The second stage NewtonFour engine, also running on LOX/RP-1 and producing 5,000 pounds (22,000 newtons) of force, will then fire in multiple burns totaling around six minutes to boost the payload into its final orbit.

LauncherOne will propel small satellites from a variety of customers into orbit. Communications company OneWeb, NASA, and the Department of Defense have all signed launch deals with Virgin Orbit.

“The Virgin brand is about making life on Earth better,” said Virgin Orbit President Dan Hart. “We are going to fulfill that purpose by accessing low Earth orbit (LEO) to connect billions of people and enabling valuable applications of data from space through Virgin Orbit’s flexible, affordable and reliable launch service.”

The first flight of LauncherOne is expected before July.

The first launch of SpaceX’s Falcon Heavy rocket will take place in early 2018 at launch pad 39A at Kennedy Space Center. Falcon Heavy is a heavy-lift rocket designed to boost large payloads into orbit. Comprised of three Falcon 9 cores connected together with two side boosters attached to a central core, the rocket will be capable of lifting a mass of more than 119,000 pounds (54 metric tons) into orbit.

The first stage of the rocket has a total of 27 Merlin 1D engines evenly distributed between the three cores. The engines will be fired nearly simultaneously, lighting in a staggered start sequence two at a time until all are ignited. This approach avoids the thrust torque that could damage the octawebs that house the engines if all are lit at the same moment.

After launch, a recovery of all three cores will be attempted so that they can be refurbished and reused. The side boosters will detach from the center core following launch and attempt to land vertically at Cape Canaveral Air Force Station. After ascending higher and separating from the second stage, the main core will attempt a vertical landing on an autonomous drone ship in the Atlantic Ocean. One Merlin engine will then power the second stage to its final orbit. 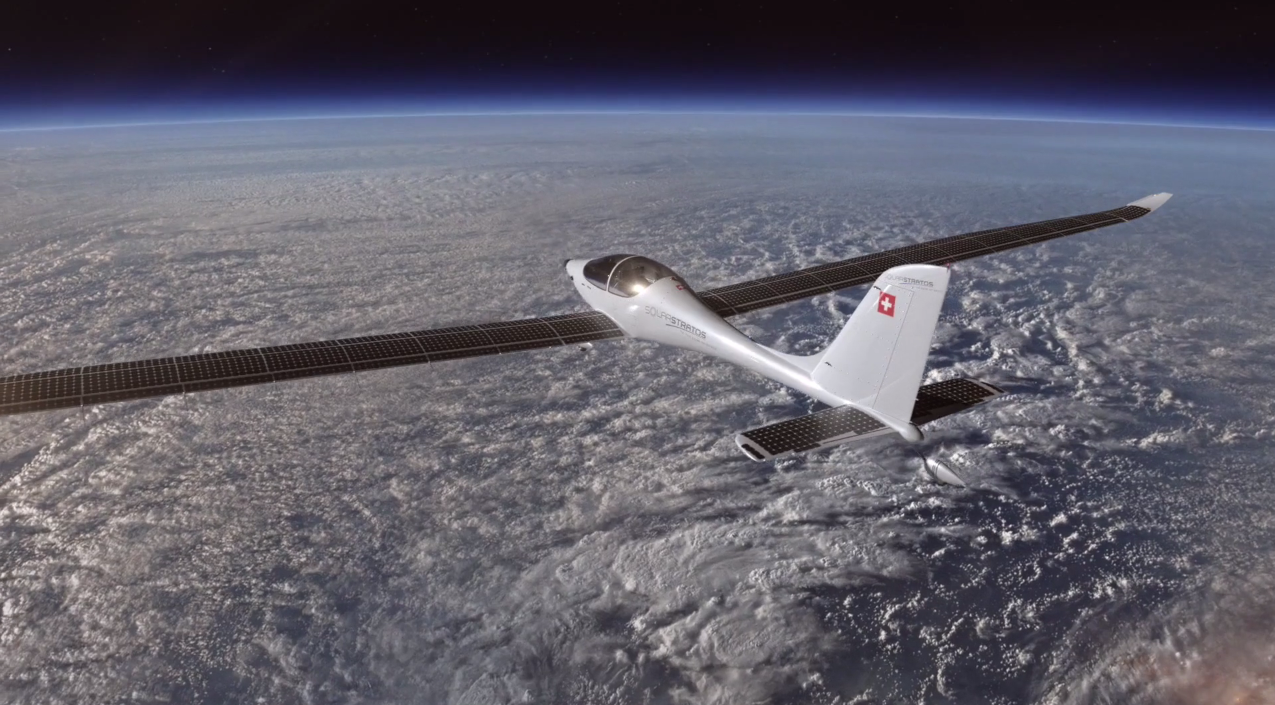 SolarStratos could become the first solar-powered aircraft to fly into the stratosphere. Source: SolarStratos

The first flight will last five hours — two hours to ascend to maximum altitude, 15 minutes cruising through the stratosphere, and three hours to descend back to the ground. To minimize its weight, the plane will be unpressurized. As a result, the pilot will need to wear a pressurized suit to withstand low atmospheric pressures of only around five percent of surface pressure and freezing temperatures down to -94 degrees F (-70 degrees C).

“Electric and solar vehicles are among the major challenges of the 21st century,” said Raphael Domjan, SolarStratos project initiator and pilot. “Our plane which can fly at 25,000 meters, opens a window to electric and solar-powered high-altitude aviation — something that has never before been attempted.”

The purpose of the project is to demonstrate the potential of renewable energy. 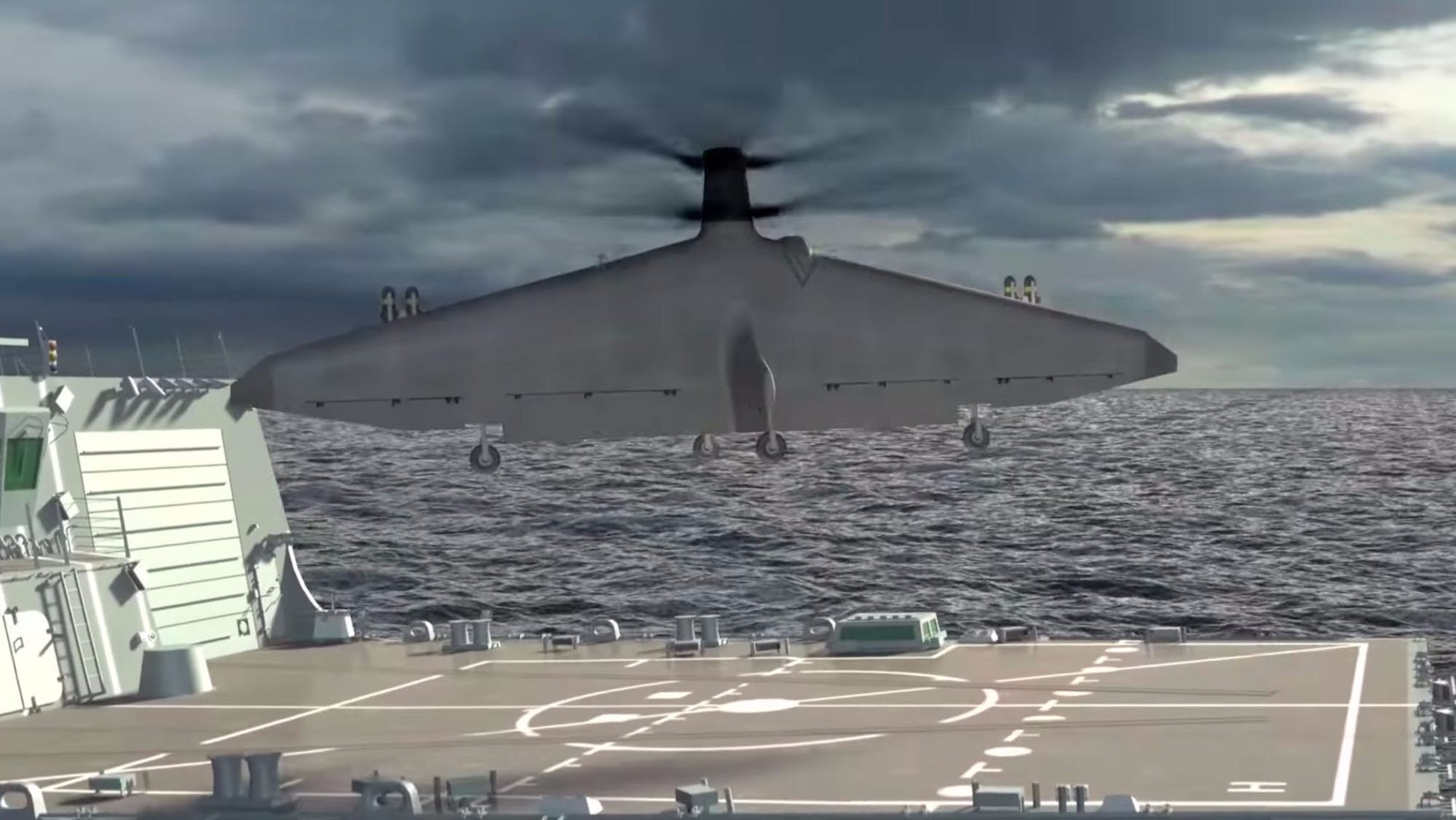 Concept graphics of the Tern UAS lifting off vertically from the flight deck of a ship at sea. Source: Northrop Grumman/YouTube

Tern is a unique vertically launched unmanned air system (UAS) being developed as part of a joint program between DARPA and the U.S. Navy’s Office of Naval Research (ONR). A full-scale technology demonstration of Tern is being built by a team led by Northrop Grumman.

Shaped like a flying wing, the medium-altitude, long endurance UAS takes off vertically from a tail-sitting position. Propulsion is provided by two propellers mounted on the nose spinning in opposite directions. After it attains some altitude, Tern transitions to a flying wing orientation for horizontal flight. To land, the aircraft switches back to a vertical orientation before touching down like a helicopter. Tern’s unique flight capabilities allow it to take off and land on helicopter decks. This allows the UAS to operate from ships with limited deck space such as destroyers and frigates without requiring a runway.

“We’re making substantial progress toward our scheduled flight tests, with much of the hardware already fabricated and software development and integration in full swing,” said Brad Tousley, director of DARPA's Tactical Technology Office. “As we keep pressing into uncharted territory — no one has flown a large unmanned tailsitter before — we remain excited about the future capabilities a successful Tern demonstration could enable: organic, persistent, long-range reconnaissance, targeting and strike support from most Navy ships.”

Ground-based testing is scheduled to begin in early 2018, with flight tests at sea starting in late 2018.

By posting a comment you confirm that you have read and accept our Posting Rules and Terms of Use.
Re: Four Aerospace Developments to Look for in 2018
#1

The Tern reminds me of Boeing's VTOL Heliwing (tail-sitter) from the '90s - they had one prototype and it flew several times before it crashed but that's par for the course in UAV development. It executed all of the maneuvers beautifully - take-off, hover, transition to forward flight, landing, etc.

Re: Four Aerospace Developments to Look for in 2018
#2

Sun sync implies Lagrange points? Or orbiting the planet every 24 hours? Neither poss from a low earth orbit, AFAIK?

Thanks Lo Volt, I orbit corrected! ;-)

Re: Four Aerospace Developments to Look for in 2018
#5

No mention of Rocket Labs.

Due to launch another test vehicle in a few days time.