Positive train control (PTC) would have slowed an Amtrak train that derailed in Washington State in December, according to a preliminary factual report from the National Transportation Safety Board (NTSB).

The technology was not in use on December 18 as the train traveled along a new stretch of track and entered a curve with a posted speed reduction. 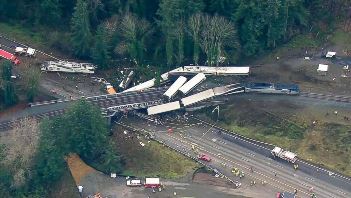 PTC might have prevented the December 18 accident that killed three an injured more than 60. Credit: NTSB/Washington State Patrol"In this accident, PTC would have notified the engineer of train 501 about the speed reduction for the curve; if the engineer did not take appropriate action to control the train's speed, PTC would have applied the train brakes to maintain compliance with the speed restriction and to stop the train," NTSB wrote.

The train was moving at 78 mph before it derailed. Three passengers were killed, and 62 passengers and crew were hurt, as well as eight people on the highway. Damages are estimated to exceed $40.4 million.

The lead locomotive, the power car and two passenger railcars derailed onto Interstate 5. Fourteen highway vehicles hit the derailed equipment. At the time of the accident, 77 passengers, five Amtrak employees and a contract technician were on the train.

The lead locomotive’s event data and video recorders were downloaded. NTSB says an initial review of the final portion of the accident sequence revealed that:

NTSB says that PTC, an advanced train control system mandated by Congress in the Rail Safety Improvement Act of 2008, is designed to prevent train-to-train collisions, overspeed derailments, incursions into established work zone limits and the movement of a train through a switch left in the wrong position.

Central Puget Sound Regional Transit Authority reported that the PTC system on this line was not operational at the time of the accident. The current Federal Railroad Administration (FRA) deadline for PTC implementation is Dec. 31, 2018.

By posting a comment you confirm that you have read and accept our Posting Rules and Terms of Use.
Advertisement
RELATED ARTICLES
Automated controls could have prevented this fatal Amtrak accident
'Significant' work remains as train control deployment status is updated
Inadequate risk assessments led to fatal train wreck
Unheeded Warnings Led to a Fatal Bus Crash with a Train
Heavy rainfall may have led to fiery Texas tank car derailment
Advertisement