Automated controls could have prevented this fatal Amtrak accident

Failure to provide an effective mitigation for a hazardous curve and inadequate training of a locomotive engineer led to the overspeed derailment of an Amtrak passenger train in December 2017 in Washington State.

On the morning of Dec. 18, 2017, Amtrak Cascades train 501, on its inaugural run on the Point Defiance Bypass between Seattle and Portland, Oregon, derailed on an overpass as it entered a 30 mph curve at approximately 78 mph. The lead locomotive and four rail cars fell onto Interstate 5 where they struck eight vehicles.

Three of the 77 train passengers were killed; 57 passengers and crew members aboard the train and eight people on the highway were injured.

“This is the third fatal overspeed passenger train derailment the NTSB has investigated since 2013,” said Robert L. Sumwalt, chairman of the National Transportation Safety Board (NTSB), which led the accident investigation. He said that all three could have been prevented by positive train control (PTC), which is being deployed at varying rates of speed by the nation's railroads. (Read the full statement.)

"Beginning revenue service on the Point Defiance Bypass before PTC was operational set up the engineer to fail," Sumwalt said. 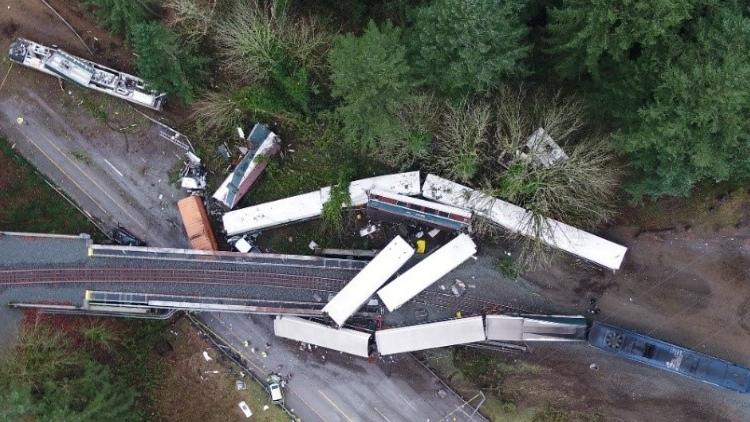 The train was traveling at 78 mph and was traveling from right to left in the image. Credit: Washington State Patrol via NTSBIn 2013, a Metro North train derailed in the Bronx, New York, killing four and injuring at least 61. The train in that accident was operating from an 80 mph straight section into a 30 mph curve.

And in 2015, Amtrak Train 188 derailed near Philadelphia, killing 8 and injuring 185. In that case, the train was operating from a 110 mph straight section into a 50 mph curve.

Given the history of past accidents and requirements for mitigating technology, Sumwalt said that for the DuPont accident in Washington State, "the question becomes, how could a 79 mph speed limit be followed by a 30 mph speed limit at the entrance to the accident curve without appropriate mitigations?"

NTSB investigators said that the Central Puget Sound Regional Transit Authority failed to adequately address a hazardous curve that required the train to slow from 79 mph to 30 mph. PTC was not in use for the track at the curve. 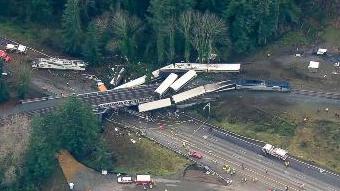 The NTSB said the PTC could have slowed the train to 30 mph to successfully traverse the curve and bridge over Interstate 5 in Washington State. Credit: NTSBPTC is an advanced train control system mandated by U.S. Congress in the Rail Safety Improvement Act of 2008. The technology is designed to prevent train-to-train collisions, overspeed derailments, incursions into established work zone limits and the movement of a train through a switch left in the wrong position.

The NTSB also said that the engineer was "somewhat familiar" with the route from observational rides and three training runs, although it was the first time he operated the train on that route in revenue service, and on a locomotive on which he had "very little" experience. The NTSB determined the engineer had insufficient training on both the route and the equipment.

Amtrak had equipped the locomotive with an inward-facing image recorder that provided investigators with both a visual and audio recording of crew member activities during the accident trip. This device was not required by the Federal Railroad Administration.

The recording allowed investigators to reconstruct a second-by-second narrative of the actions, movements and words of the engineer and the conductor throughout the entire trip. The engineer and conductor engaged in brief conversations throughout the trip; as the train passed the only sign warning of a speed reduction prior to the accident curve, NTSB said that the engineer was not engaged in conversation and was looking ahead.

Investigators also found the trainset involved in the crash, which did not meet current crashworthiness standards and was only permitted to operate through a grandfathering agreement with the Federal Railroad Administration, was structurally vulnerable to high-energy derailments or collisions.

Responsibility for the planning, safety and oversight of the Cascades operation involved numerous organizations, including Amtrak, the Washington State Department of Transportation, the Federal Railroad Administration and the Central Puget Sound Regional Transit Authority. Investigators found there was a general sense that none of the participants fully understood the scope of their roles and responsibilities as they pertained to the safe operation of the service, which allowed critical safety areas to be unaddressed.

Re: Automated controls could have prevented this fatal Amtrak accident
#1

Only one sign warning of a speed reduction from 80 MPH to 30 MPH? Consider how many signs would be on a typical interstate highway for speed reductions of that magnitude, corner warnings, etc.?

Talk about a low-tech solution.

Positive train control (PTC) is certainly worth pursuing, but better signs can be implemented tomorrow.

Re: Automated controls could have prevented this fatal Amtrak accident
#2

After reading about this accident, I found myself wondering why the data for rail lines aren't on the GPS units which seem to have the speed limit on nearly every roadway. It would be quite straightforward to have a version that would provide sufficient warning to alert the engineer about a speed limit change. Other than mapping the rail lines and the associated speed limits, the unit would need to have both a visual (which most units have) and an audible warning.

It's been done for highways; there is no excuse for not doing it for the railways

Re: Automated controls could have prevented this fatal Amtrak accident
#3

I just think someone should say the engineer and Conductor are ultimately the people who could/should have prevented this accident. The more we rely on technology to relieve human responsibility the more irresponsible humans we create. If I put myself in their position I would certainly feel totally responsible not slowing the train. As a first time engineer does it not dictate an even more cautious, and more attentive mind set than the seasoned professional. Must we keep lowering standards to accommodate incompetence?

If, for instance, the train's brakes failed or the tracks failed unexpectedly then perhaps another culprit is at fault

I'm sorry if my comment is harsh to those involved but feel it must be said. People in such positions must be alert, awake and aware that lives depend on their actions, or inactions.

If they are not willing to accept these conditions they should be content with more menial employment.

Re: Automated controls could have prevented this fatal Amtrak accident
#4

Sweden and Norway has had the ATC, Automatic Train Control, in operation since 1980, assisting the engineer with speed-signaling on a control panel, also taking active control of the brakes if speed is exceeded performing a braking action with regards to actual train braking ability.