Coal’s share of total electricity generation in the southern U.S. declined over the past decade, from 50 percent in 2006 to 29 percent in 2016.

As the use of coal has declined, the use of natural gas has increased. In 2016, southern states used natural gas for 42 percent of their electricity generation, a bigger share than the U.S. average of 34 percent.

The Energy Department’s Energy Information Administration (EIA) says that the mix of fuels used to generate electricity varies among southern states, but the overall mix is dominated by natural gas and coal. At the state level, natural gas made up as much as 89 percent of in-state electricity generation in Delaware to as little as 2 percent in West Virginia. 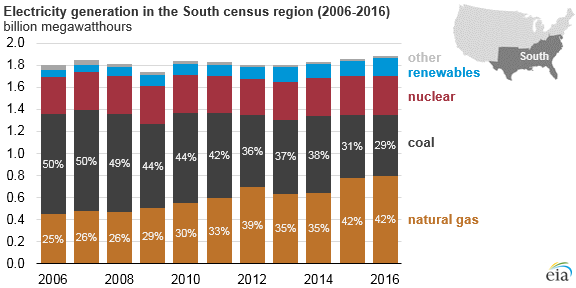 Source: EIAMost Southern states that use coal for the largest share of their electricity generation are part of the Northern or Central Appalachian basins, two of five major coal mining regions in the United States. West Virginia and Kentucky are among the top five coal mining states, and both states use coal for most of their electricity generation — 94 percent and 83 percent, respectively.

EIA says that more coal-fired generating units were retired in the South between 2006 and 2016 than units fueled by any other fuel type, with 20.8 gigawatts (GW) of capacity taken offline during that period. 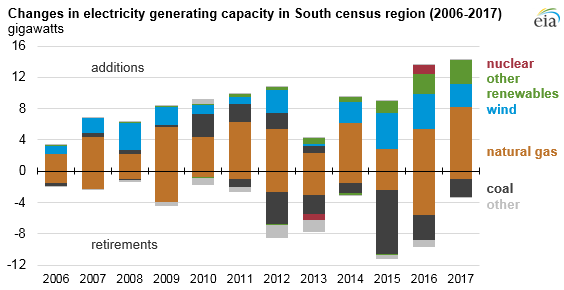 Source: EIAAlthough 9.6 GW of coal capacity was added between 2007 and 2013, no coal units have been installed since 2013. New installed capacity in the region came primarily from natural gas and wind, with an additional 47.0 GW and 25.6 GW installed, respectively, between 2006 and 2017.

Wind additions in the South have been concentrated in Texas and Oklahoma, which ranked first and third nationally for total installed wind capacity as of September 2017.

By posting a comment you confirm that you have read and accept our Posting Rules and Terms of Use.
Advertisement
RELATED ARTICLES
Gas Generation on Top for Third Year in Row, EIA Says
CO2 Emissions Are Both Down and Up, Data Shows
Renewable Energy’s Share of Power Generation to Jump: EIA
The Shift Away from Coal in One Picture
Gas-fired power generation is leaving coal in the dust
Advertisement