An international project has delivered the world’s largest solar-chemical installation for the production of hydrogen. The HYDROSOL-Plant (thermochemical HYDROgen product in a SOLar monolithic reactor) in southern Spain can provide 750 kW of power, a marked improvement over the 100 kW output achieved in past development phases.

Hydrogen is produced directly via a thermo-chemical redox reaction using the thermal energy of the sun. A 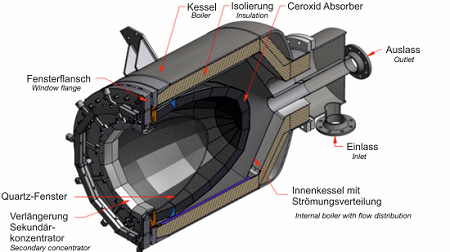 Structure of the HYDROSOL reactor. Source: DLRset of mirrors directs sunlight onto a single point that is heated to very high temperatures. This heat is harnessed to split water into hydrogen and oxygen.

In the first part of the process, solar energy is used to heat redox materials, such as nickel ferrite or cerium oxide, in the interior of the reactor to 1400 degrees C. At these temperatures, the metal oxide is chemically reduced: oxygen is released and transported out of the reactor.

Water splitting occurs in the second step at 800-1,000 degrees C as water vapor flows through the reactor and reoxidizes the previously reduced material. Oxygen remains in the reactor as hydrogen is transported out, and the reoxidized material is regenerated through the first step as the cycle starts again.

Solar radiation is secondarily focused using a cone with a reflective coating to increase efficiency. Newly developed ceramic foams offer potential for higher hydrogen yields and greater durability. The researchers expect that these will produce around three kilograms of hydrogen per week in test mode, and that it will be at least a few years before the procedure is ready for the market and for commercial applications.

According to Martin Roeb, Project Manager at the DLR Institute of Solar Research, “The first applications could act as a stand-alone solution, for instance in areas where there is no connection to the electricity network. In those cases, a production of 10 kilograms per week may already be worthwhile. Depending on how fast development progresses, in 10 years time it will be possible to use this procedure for the industrial generation of hydrogen.”