Hydrogen Produced at the Pump? 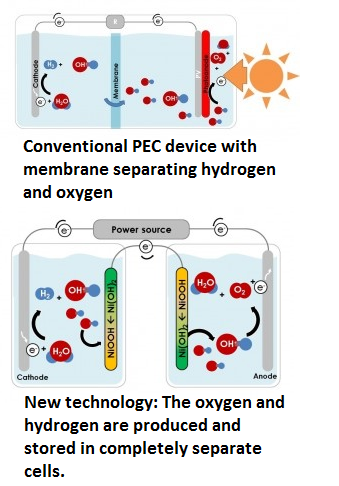 New technology developed at the Technion uses solar power to separate hydrogen and oxygen in water. One
potential application is producing hydrogen at the point of sale, such as a gas station where hydrogen-powered electric cars stop to fill up.

Hydrogen as a fuel offers several advantages over other energy sources, including the element’s abundance.
Currently most hydrogen comes from natural gas, but the production process releases carbon dioxide into the atmosphere. Splitting water molecules into hydrogen and oxygen by electrolysis looks feasible. The process uses electricity; electricity production is expensive and causes pollution.

Many researchers are developing photoelectrochemical (PEC) cells that split water molecules directly without using an external power source. The Technion research team addressed the limitations of this method — separate storage for hydrogen and oxygen, collecting the gases from multiple cells, and transporting hydrogen — by developing a new kind of PEC technology.

The new method produces oxygen and hydrogen at different sites. Oxygen is produced exclusively at a large solar farm. Hydrogen is produced elsewhere, at the point of use or purchase. This is accomplished by replacing the electrode in the conventional PEC with a photo- anode. The cells are completely separated. The prototype uses inexpensive nickel hydroxide for electrodes, connected by a metal wire.

Economists at Evonik Creavis GmbH and the Institute of Solar Research at the German Aerospace Center (DLR) calculated that the new technology could offer be appreciable savings over conventional production methods.

By posting a comment you confirm that you have read and accept our Posting Rules and Terms of Use.
Re: Hydrogen Produced at the Pump?
#1

Are the intermediate NI ''electrodes'' physically-chemically stable under the constantly varying chemistry of the aqueous-electrolyte solutions at each site?

Re: Hydrogen Produced at the Pump?
#2

It will never go public unless the metal oxide (and other electrodes) are physically and chemically stable under the conditions of service. There might be service pre-requisites to be also managed, such as a requirement for purified water to be added to the cells, and also, for a stable electrolyte in solution.

The water could not be too much on the acidic side, or the nickel oxide/nickel hydroxide coating of the electrodes would perhaps dissolve.

Here i am share that if you forgot the password the from how to manage saved passwords in microsoft edge it will be for those who getting excited to new some latest features of the windows.

Thanks for the windows that they will be sharing all the latest updates as soon as possible.