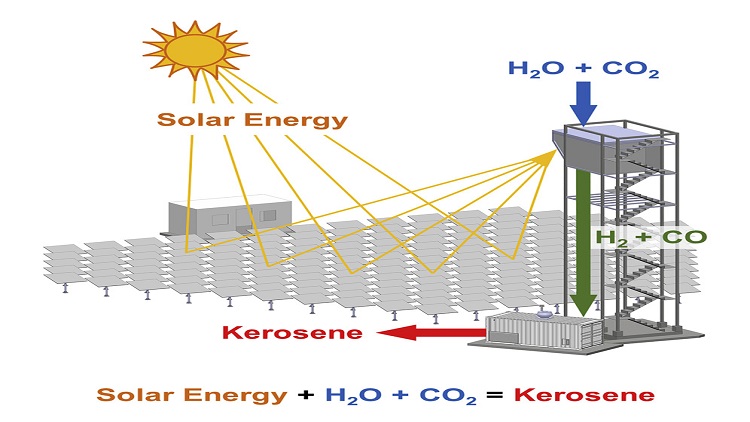 A solar-powered fuel production system has been engineered by an international research team to shrink the greenhouse gas footprint of the aviation sector. Constructed and field-tested at the pilot scale in Spain, the solar thermochemical system uses water, carbon dioxide (CO2) and sunlight to produce kerosene.

The 50 kW facility consists of 169 sun-tracking reflective panels that redirect and concentrate solar radiation into a solar reactor mounted on top of a tower. The concentrated solar energy drives oxidation-reduction (redox) reaction cycles in the solar reactor, which contains a porous structure made of ceria. The reusable ceria converts water and CO2 injected into the reactor into syngas, a tailored mixture of hydrogen and carbon monoxide. Subsequently, syngas is sent into a gas-to-liquid converter, where it is finally processed into liquid hydrocarbon fuels that include kerosene and diesel.

During a nine-day run of the plant, described in Joule, the solar reactor’s energy efficiency, indicating the portion of solar energy input converted into the energy content of the syngas produced, was about 4%. The researchers are exploring ways to optimize the ceria structure for absorbing solar radiation and developing methods to recover the heat released during redox cycles in order to boost efficiency values over 15%.

The drop-in solar-made kerosene is fully compatible with the existing aviation infrastructure for fuel storage, distribution and end use in jet engines. The fuel can also be blended with fossil-derived kerosene.

By posting a comment you confirm that you have read and accept our Posting Rules and Terms of Use.
Re: Solar tower yields carbon-neutral aviation fuel
#1

Burn it and turn it back in to CO2