The Environmental Price of Pot 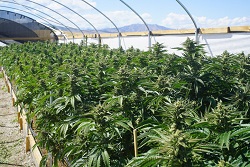 Cannabis grown in an outdoor greenhouse. (Photo by Seastock)products. Now that marijuana is legal in more than 30 U.S. states and in several countries, cultivation of this crop has greatly expanded. And this increase in pot production has resulted in some notable environmental impacts, according to a study conducted by U.S. academic researchers.

An approach for early assessment of landscape changes resulting from new agricultural activities was applied to forest fragmentation trends in northern California. The effects of cannabis cultivation were compared with those of timber harvest during 2000-2013 in Humboldt County.

Current California law caps the size of outdoor cannabis production to 1 acre per parcel so as to prohibit the development of industrial-scale cannabis operations outdoors. An unintended consequence of this law may be small dispersed cannabis operations that edge out wildlife.

By posting a comment you confirm that you have read and accept our Posting Rules and Terms of Use.
Advertisement
RELATED ARTICLES
Pot Growers Can Qualify for Ag Rates from PG&E
Pollutants from pot: VOCs and cannabis cultivation
Firm Aims to Help Legal Cannabis Growers Go Green
ASTM Committee to Develop Cannabis Standards
Company automates filling and capping of cannabis oil
Advertisement