The Petra Nova facility, a coal-fired power plant located near Houston, Texas, is one of only two operating power plants with carbon capture and storage (CCS) in the world, and it is the only such facility in the United States.

The 110 megawatt (MW) Boundary Dam plant in Saskatchewan, Canada, near the border with North Dakota, is the other electric utility facility using a CCS system. 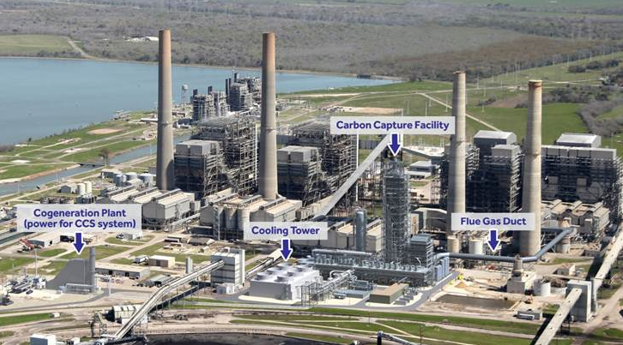 Key technologies deployed at the Petra Nova facility. Credit: EIAA third power plant in Kemper County, Mississippi., is capable of burning natural gas as well as lignite coal and was expected to be fully operational and capable of using CCS by mid-2014. However, Kemper has operated primarily on natural gas, essentially as a combined-cycle plant, since August 2014.

In June 2017, Mississippi Power decided to suspend operations activities relating to the coal gasification process, electing to operate Kemper strictly as a natural gas-fired combined-cycle plant. Kemper has also abandoned plans to use technology to capture its greenhouse gas emissions. 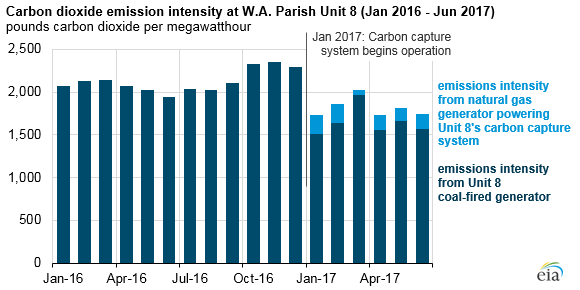 Emission intensity at W.A. Parish Unit 8. Credit: EIAPetra Nova’s carbon-capture system is designed to capture about 90 percent of the CO2 emitted from the flue gas slipstream, or about 33 percent of the total emissions from Unit 8. The post-combustion process is energy intensive and requires a dedicated natural gas unit to accommodate the energy requirements of the carbon-capture process.

By comparison, Kemper had been designed to capture about 65 percent of the plant’s CO2 using a pre-combustion system. The capital costs associated with the Kemper project were initially estimated at $2.4 billion, or about $4,100 per kilowatt (kW). Cost overruns led to construction costs in excess of $7.5 billion (nearly $13,000/kW).

Petra Nova CCS retrofit costs were reported to be $1 billion, or $4,200/kW, and the project was completed on budget and on time.

By posting a comment you confirm that you have read and accept our Posting Rules and Terms of Use.
Advertisement
RELATED ARTICLES
Project Startups Showcase Carbon Capture Technology
Fundamentals of carbon capture
Insight: Carbon Capture and Sequestration Face an Uphill Battle
Carbon storage - lending the forests a hand
Carbon Capture on a Commercial Scale
Advertisement