Carbon Capture on a Commercial Scale 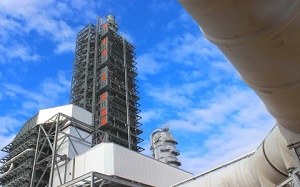 After initial testing in September 2016, Petra Nova has delivered more than 100,000 tons of captured CO2 to the West Ranch oil field through an 80-mile pipeline.

The facility captures more than 90% of CO2 from a 240 MW equivalent slipstream of flue gas off an existing coal-fueled electrical generating unit at the WA Parish power plant in Fort Bend County, southwest of Houston. At this level of operation, Petra Nova can capture more than 5,000 tons of CO2 per day, which is the equivalent of taking more than 350,000 cars off the road.

Hilcorp Energy Company -- the operator of the oil field -- and the University Of Texas Bureau Of Economic Geology will monitor CO2 movement deep in the oil reservoir. Oil production at the field is currently estimated to increase from approximately 300 barrels per day before beginning Enhanced Oil Recovery (EOR) operations to production of up to 15,000 barrels per day using captured CO2.