Young and Starting a Business? You're Not Alone

Startups make up about one-third of U.S. small employer firms and tend to have bosses who are younger than those running a typical mature small firm, according to the 2016 Small Business Credit Survey: Report on Startup Firms. 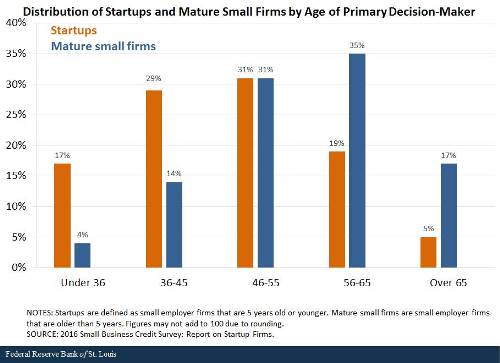 The survey covered small employer firms and found the following:

• Twenty percent of small employer firms are startups that are two years old or younger.

• Fourteen percent of small employer firms are startups that are 3-5 years old.

• The remaining 66 percent of small employer firms are considered mature firms, those that are more than five years old.

Where Are the Startups?

Geographically, startups tend to locate where other older small firms are.

The South Atlantic region had the biggest share of both of these types of firms: 22 percent of startups and 18 percent of mature small firms are located in this region, which is made up of Delaware, District of Columbia, Florida, Georgia, Maryland, North Carolina, South Carolina, Virginia and West Virginia. 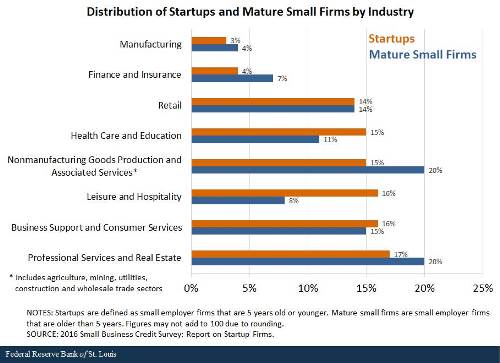 Source: St. Louis Federal Reserve BankThe New England region had the smallest share of these types of firms: 5 percent of both startups and mature small firms are in this region, which is made up of Connecticut, Maine, Massachusetts, New Hampshire, Rhode Island and Vermont.

Differences exist in the industries where they work. For instance, startups are twice as likely as mature small firms (16 percent versus 8 percent) to operate in the leisure and hospitality industry. They are also more likely to be in the health care and education industry and the business support and consumer services industry.

By posting a comment you confirm that you have read and accept our Posting Rules and Terms of Use.
Advertisement
RELATED ARTICLES
Employee Benefit Trends in the US: Small Firms at a Severe Disadvantage
Video: Data-driven testing gives startups ability to fail and succeed faster
Annual Pulse of Engineering Survey: Pros Focused on Their Work
Why Prefabricated Construction is Changing the World
John Deere Leads Manufacturing Companies in Employee Satisfaction: PayScale Report
Advertisement