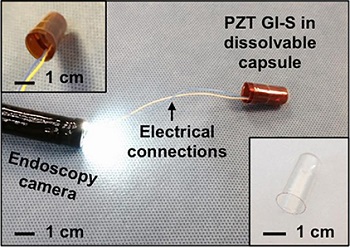 Components of the ingestible sensor. Source: MIT/Brigham and Women’s Hospital

A minimally invasive solution was designed at MIT and Brigham and Women’s Hospital to monitor what’s happening in the gastrointestinal tract. By adhering to the stomach wall or intestinal lining after it is swallowed, the flexible sensor tracks rhythmic contractions of the digestive tract. Measuring 2 by 2.5 cm, it can be rolled up and placed in a capsule that dissolves after being swallowed.

The devices are composed of piezoelectric materials and also incorporate polymers with elasticity similar to that of human skin, so that they can conform and stretch when the skin stretches. The researchers fabricated electronic circuits on a silicon wafer with one gold and one platinum electrode. The circuit is removed from the wafer and printed onto polyimide, a flexible polymer. The sensors were demonstrated to function for up to two days after being endoscopically delivered to the stomachs of pigs.

Information was transmitted through external cables about how much voltage the piezoelectrical sensor generated, from which the researchers could calculate how much the stomach wall was moving, as well as distinguish when food or liquid was ingested.

The device could be used to gauge the food intake of patients being treated for obesity, or to improve the diagnosis of various digestive disorders. The researchers plan to harvest some of the energy generated by the piezoelectric material to power other features, including additional sensors and wireless transmitters. Such devices would not require a battery, further improving their potential safety.

By posting a comment you confirm that you have read and accept our Posting Rules and Terms of Use.
Advertisement
RELATED ARTICLES
Engineers Tap Stomach Acid to Power Tiny Sensors
Ingestible Device That Monitors Vital Signs
Slimy robot promises to retrieve swallowed objects from the human body
Pill Attaches to Gastrointestinal Tract for Slow Release
Watch: Microrobots designed to travel and treat the GI tract
Advertisement