Researchers from MIT and Brigham and Women’s Hospital have designed a new type of pill that, once swallowed, can attach to the lining of the gastrointestinal (GI) tract and slowly release its contents. The tablet is engineered so that one side adheres to tissue, while the other repels food and liquids that would otherwise pull it away from the attachment site.

Such extended-release pills could be used to reduce the dosage frequency of some drugs, the researchers say. For example, antibiotics that normally have to be taken two or three times a day could be given just once, making it easier for patients to stick to their dosing schedule.

“This could be adapted to many drugs. Any drug that is dosed frequently could be amenable to this kind of system,” says Giovanni Traverso, a research affiliate at MIT’s Koch Institute for Integrative Cancer Research and a gastroenterologist at Brigham and Women’s Hospital.

Over the past several decades, the lab of fellow researcher and MIT Professor of Chemical Engineering Robert Langer has developed many types of materials that can be implanted in the body or attached to the skin for long-term drug release. To achieve similar, long-term drug release in the gastrointestinal tract, the researchers focused on a type of material known as mucoadhesives, which can stick to the mucosal linings of organs such as the stomach.

Scientists have previously explored using this kind of material for drug delivery to the GI tract, but it has proven difficult because food and liquid in the stomach become stuck to the tablet, pulling it away from the tissue before it can deliver its entire drug payload.

To overcome this challenge, the researchers decided to create a dual-sided device, also called a Janus device. One side sticks to mucosal surfaces, while the other is omniphobic, meaning that it repels everything it encounters. 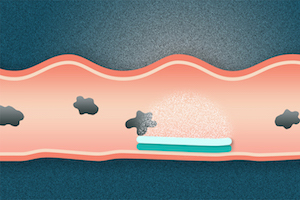 One side of the pill sticks to mucosal surfaces, while the other repels everything it encounters. Image credit: MIT/Christine Daniloff.For the mucoadhesive side, the researchers used a commercially available polymer known as Carbopol, which is often used industrially as a stabilizing or thickening agent. The omniphobic side consists of cellulose acetate that the researchers textured so that its surface would mimic that of a lotus leaf, which has micro and nanoscale protrusions that make it extremely hydrophobic. They then fluorinated and lubricated the surface, making it repel nearly any material.

To simulate the tumultuous environment of the GI tract, the researchers flowed a mix of food, including liquids and small pieces of bread and rice, along the tissue and then added the tablets. The dual-sided omniphobic tablet took less than 1 second to travel along the tissue, and the dual-sided mucoadhesive stuck to the tissue for only 7 seconds before being pulled off. The Janus version stayed attached for the length of the experiment, about 10 minutes.

Tejal Desai, professor of bioengineering and therapeutic sciences at the University of California at San Francisco, says this approach could make it possible to deliver larger quantities of drugs through the GI tract.

“The ability to precisely engineer the adhesiveness of a particle opens up possibilities of designing particles to selectively adhere to specific regions of the GI tract, which in turn can increase the local or systemic concentrations of a particular drug,” says Desai, who was not involved in the work.

The researchers now plan to do further tests on animals to help them fine-tune how long the tablets can stay attached, the rate at which drugs are released from the material and the ability to target the material to specific sections of the GI tract. The researchers may also further pursue the development of tablets with omniphobic coatings on both sides, which they believe could help patients who have trouble swallowing pills.

By posting a comment you confirm that you have read and accept our Posting Rules and Terms of Use.
Advertisement
RELATED ARTICLES
Larynx of a 3,000-year-old mummy recreated with 3D printing
Janus particles could be used to create environmentally friendly paint
Custom meds could be possible thanks to 3D printing
Team develops anti-counterfeit tech for luxury items
Watch: Microrobots designed to travel and treat the GI tract
Advertisement