Researchers at the Massachusetts Institute of Technology have developed an ingestible sensor that measures heart and respiratory rates from within the gastrointestinal tract. The sensor could facilitate health assessments of patients with trauma or chronic illness, soldiers and athletes in training.

Currently, doctors measure vital signs using techniques such as electrocardiograms and pulse oximetry that require contact with the patient’s skin. Vital signs can also be measured with wearable monitors that can be uncomfortable.

Inspired by existing ingestible devices that can measure body temperature, and others that take internal digestive-tract images, researchers—led by Giovanni Traverso, a research affiliate at MIT’s Koch Institute for Integrative Cancer Research, and Gregory Ciccarelli, an associate staff member at MIT’s Lincoln Laboratory—set out to design a sensor that would measure heart and respiratory rate, as well as temperature, from inside the digestive tract.

The simplest way to achieve this, they decided, would be to listen to the body using a small microphone. So they created essentially “an extremely tiny stethoscope that you can swallow,” says Albert Swiston, a technical staff member at Lincoln Laboratory. 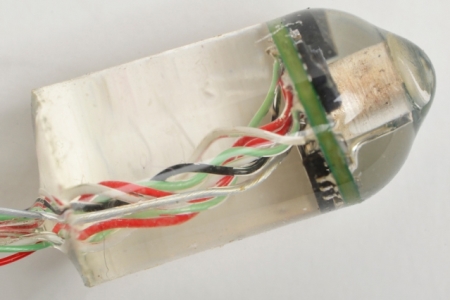 The sensor is about the size of a multivitamin pill and consists of a microphone packaged in a silicone capsule, along with electronics that process the sound and wirelessly send radio signals to an external receiver, with a range of about 3 meters.

In tests along the gastrointestinal tract of pigs, the researchers found that the device could accurately pick up heart and respiratory rates even when conditions such as the amount of food being digested varied.

The researchers expect that the device would remain in the digestive tract for a day or two, so for longer-term monitoring patients would swallow new capsules as needed.

In the future, the researchers plan to design sensors that could diagnose heart conditions such as abnormal heart rhythms, or breathing problems such as emphysema or asthma. Currently doctors require patients to wear a harness monitor for up to a week to detect such problems. These often fail to produce a diagnosis because patients can become uncomfortable wearing them 24 hours a day.