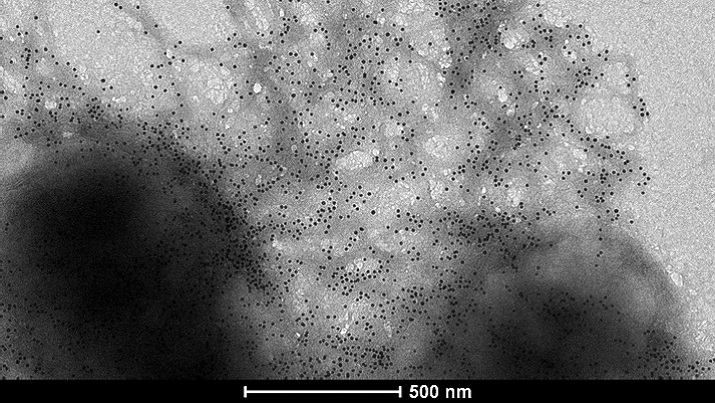 Would you have imagined a colony of bacteria could build a useable pressure sensor … or countless other devices?

Researchers at Duke University imagined it. In a study appearing today in Nature Biotechnology, the researchers describe creating a hybrid organic/inorganic sensor that lights LED bulbs to varying degrees; the amount of brightness reflects the level of pressure applied.

The key was to program bacteria with a synthetic gene circuit. As the bacterial colony grows, that gene circuit triggers the production of a protein that can recruit inorganic materials — such as the gold nanoparticles that the researchers supplied. The addition of the nanoparticles causes a golden shell to be formed around the colony, creating a dome.

The researchers grew identical arrays of domes on two substrates, sandwiched them together, and connected each dome to an LED light bulb through copper wiring. Pressure applied to the sandwich would cause the domes to press into one another, increasing conductivity and brightening the LED bulbs correspondingly.

"This technology allows us to grow a functional device from a single cell," said Duke engineering professor Lingchong You. "Fundamentally, it is no different from programming a cell to grow an entire tree."

This method of construction would have many advantages over current manufacturing processes — the casting of new dies or molds, for example, could be replaced by tweaking growth instructions to create different shapes and patterns.

“The number of directions this could be taken in is vast," said Will (Yangxiaolu) Cao, a postdoctoral associate in You's laboratory and first author of the paper. "We could use biologically responsive materials to create living circuits. Or if we could keep the bacteria alive, you could imagine making materials that could heal themselves and respond to environmental changes."

"We're demonstrating one way of fabricating a 3D structure based entirely on the principal [sic] of self-organization," added Duke professor of mechanical engineering and materials science Stefan Zauscher. "This approach is inspired by nature, and because nature doesn't do this on its own, we've manipulated nature to do it for us."