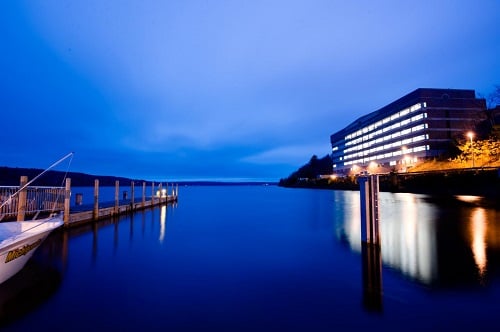 Researchers equate the mesopore with a harbor and the electrolyte ions are ships that can dock in the micropores, making the material an exceptional supercapacitor. Source: Michigan TechResearchers at Michigan Technological University have developed a new process that involves taking carbon dioxide and turning it into 3D graphene with micropores across the surface.

These tiny dents in the surface of the graphene greatly enhance the potential use for the technology as a supercapacitor.

"3-D surface-microporous graphene is a brand-new material," says Yun Hang Hu, a materials scientist at Michigan Technological University. "It would be an excellent electrode material for energy storage devices."

The material’s surface is pockmarked with micropores that fold into larger mesopores, which both increase the surface area available for adsorption of electrolyte ions.

Because this material has supercapactive properties, the 3D surface-microporous graphene makes it suitable for elevators, buses, cranes and any application that requires a rapid charge/discharge cycle. Supercapacitors have also been used for regenerative braking systems in hybrid vehicles.

Current solutions employ activating carbon using swaths of micropores to provide efficient charge accumulation. However, because of the carbon’s deep micropores, electrolyte ions have difficulty diffusing into or through the surface, increasing the charging time.

"The new 3-D surface-microporous graphene solves this," Hu says. "The interconnected mesopores are channels that can act as an electrolyte reservoir and the surface-micropores adsorb electrolyte ions without needing to pull the ions deep inside the micropore."

In this method, the ions don’t have to travel a great distance, greatly improving charge/discharge cycles. As a result, the material showed an excellent rate capability as well as superb cycling stability for supercapacitors, researchers say.

The full research can be found in the journal Applied Materials & Interface.