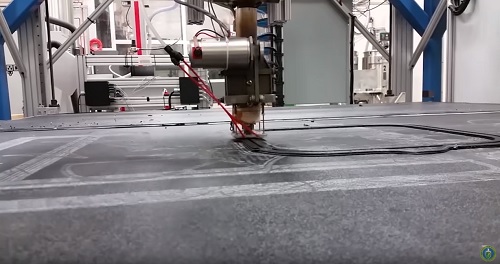 The U.S. Department of Energy and the U.S. Navy have 3D printed what it says is the largest 3D printed asset to date in the form of a submarine hull.

The proof-of-concept hull is the first of several planned on-demand and disposable vehicles the Navy wants to create using 3D printing.

The prototype was built by the Department of Defense and the Department of Energy and is classified as an optionally manned technology demonstrator (OMTD) that is 30 feet long, 4.5 feet in diameter and comprised of six carbon fiber composite sections.

The submersible hull took about four weeks to complete and the government agencies say the production of the hull reduced production costs by as much as 90 percent using an additive manufacturing machine.

The Navy plans to print a second version of the hull to test at its wave testing facilities in Maryland. If those tests are successful, 3D printed submersibles could be introduced for use by 2019.

The Navy says early stage R&D collaborations such as this submersible are addressing the challenges of accelerating how vehicles are built and the amount of energy and resources needed to accomplish the task as well as its impact on the global community.

By posting a comment you confirm that you have read and accept our Posting Rules and Terms of Use.
Advertisement
RELATED ARTICLES
Atomic Sub: How Focus and Drive Delivered a Radical New Design
Time for an Airship Revival?
Researchers Develop Ship Coatings to Fight Friction Drag
Lockheed to Build Dry Combat Submersibles for Navy SEALs
Navy Ship Replaces Valves
Advertisement