Time for an Airship Revival?

For a short while in the first half of the 20th century airships seemed to represent the future of long distance air travel. But that prospect, and indeed the fundamental reliability of the concept, suffered loss of credibility when several high-profile disasters occurred within the space of a decade.

First, in 1930, the British R101 crashed in France on its maiden flight killing 48 of those on-board. In 1933 the USS Akron, an airship operated by the U.S. Navy was destroyed in a storm off New Jersey, with 73 fatalities. Finally - and most spectacularly – the German airship Hindenburg burst into flames as it approached its mooring mast at Lakehurst Naval Air Station in New Jersey in 1937, killing 36 people. 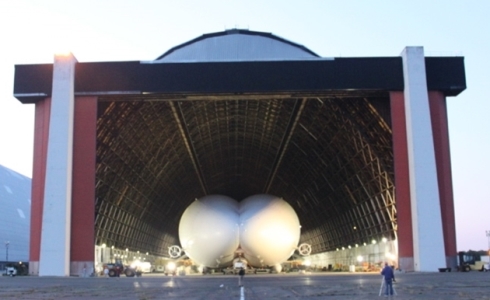 The airship in its hangar at Cardington in southern England.

Since then the concept of travel by airship has experienced limited use in the form of relatively small “blimps,” which differ from the conventional airship in that their gas-filled envelope lacks any rigid structure; one of the most common applications is as an airborne television camera platform at sporting events.

Now, however, giant airships might be about to make a comeback, albeit in a form that represents an advance in their aerodynamics and for purposes in which carrying cargo and technical payloads will predominate.

But the reality is that it is a hybrid vehicle that achieves lift not only aerostatically (in other words, through being filled with the lighter-than-air gas helium), but also to a large degree aerodynamically, through the interaction of its elliptical cross-section and the air as the craft moves forward. The relative proportions of those two sources of lift can be as close as, respectively, 60-40%.

According to Chris Daniels, head of partnerships for Hybrid Air Vehicles, the company behind the venture, “Engineers have been trying to do this for many years but no one else has succeeded in producing a full-sized workable prototype.” Airlander also represents an advance over previous practice is in its use of materials. The hull will, for instance, have a material composition that will be “completely new for aerospace.” Specifically the outer skin will comprise a triple-layer sandwich of materials intended to provide three essential performance characteristics. These are from the inside outwards:

• Vectran – a fiber material to provide structural qualities.
• Mylar – a polymer film to ensure the skin is impermeable to the helium gas that provides aerostatic lift.
• Tedlar – a polymer to provide weatherproofing.

In fact, the whole Airlander concept has generated no fewer than 21 different patents. “The design of the hull is clearly one, as are the hull materials,” Daniels says. “The butterfly vanes on the engines and the way they move around a single central pivot are another example.” The majority of patents are commercially sensitive, he says. 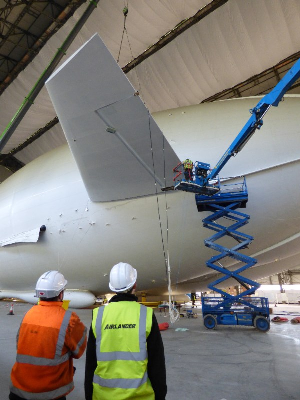 Workers attach a fin to the airship. The airship borrows technology from other applications. For example, Daniels says that a majority of the attachments on the hull are composed of carbon composites from UK company Forward Composites, which developed them for the motorsport industry.
“Airlander has many examples of horizontal innovation,” Daniels says. The mix of light weight and rigidity that characterizes the Airlander's hull is achieved by exploiting materials expertise derived from America's Cup yacht sail technology. “They needed a light and super strong material that never distorted, so the performance of the sail remained constant,” says Daniels, explaining how the two applications posed a similar design challenge.

Elsewhere, though, the Airlander makes use of applications that are not thousands of feet below where it will fly but hundreds of miles above. Specifically, says Daniels, U.S. company ILC Dover, which heat welded the strips of hull material together into the Airlander’s aerodynamic shape, developed expertise by manufacturing space suits for space agency NASA. As a result, he says, “they are pretty good at making things gas-tight.”

But, as Daniels says, the importance of technical innovations that the Airlander will embody is that they will make possible both flexibility and economy in its day-to-day operations. The basic concept, he says, “combines the best of both conventional aircraft and helicopters” to enable not just such capabilities as hovering, but also that of being able to land on multiple surfaces including water, ice and desert.

Moreover, the company also expects the vehicle will be the first aircraft of significant size to achieve “commercially viable zero carbon flight. ” Its large surface area could, for instance, be exploited by fitting it with solar panels.
Certain aspects of the company's operations provide links with previous airship ventures. One of them is geographical – Cardington is the traditional base for UK airship operations and is the site from which the R101 took off on its ill-fated flight. It remains the site for two airship hangars built in the 1920s, one of which provides Hybrid Air Vehicles with space to house the Airlander.

Another is linkage to U.S. military operations. The Airlander is, Daniels says, derived from a 2010 contract with the U.S. government to deliver an airborne vehicle with a heavy lift capability that also was capable of delivering loads to locations that would be inaccessible to more conventional aircraft. Some $300 million was invested in the project which led to the maiden flight of the HAV304 in 2012 before the initiative was cancelled because of a change in requirements. 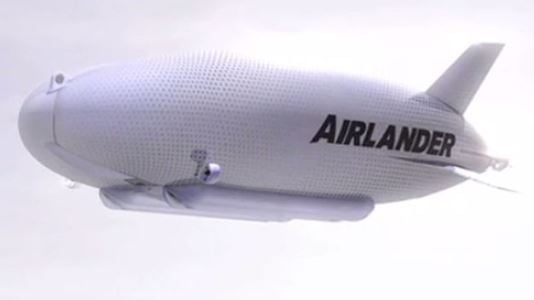 Artist’s impression of the Airlander in flight. Although the program was canceled, the company – which was founded in 2007 – bought back the rights to the concept to develop it further itself. “The Airlander 10 is essentially the same aircraft that flew in the U.S. but there have been some minor modifications, based on additional testing and modelling,” says Daniels. All elements of that initial version that might be restricted by the U.S. International Traffic in Arms Regulations (ITAR) have been stripped from the new one, removing one barrier to its development and commercial use.

One design principle that has been maintained is that the Airlander has no rigid internal structure, although it does have internal diaphragms that provide for compartmentalization, and which also means that the vehicle is made up of two twin-hulls. The Airlander maintains its shape by means of a system of ballonets located both fore and aft in each of its hulls. These are filled with air when the craft is at ground level. The air then is gradually exhausted back out into the atmosphere as it climbs towards its ceiling of 20,000 feet to allow the captive helium to expand as external pressure falls.

The Airlander seems to split into three sections at its rear but this localized variation in geometry has a specific purpose. “The tri-lobe at the back mainly helps with raising the center of buoyancy and creating more lift at the rear, where the fuel module is located,” says Daniels.

The Airlander’s actual assembly makes use of conventionally available techniques. The size of the vehicle is the key challenge and assembly procedures are carried out with the aid of cranes and “cherry picker” platforms often found in warehouse applications. Daniels says that that if the company achieves its target of commercial production of more than 10 of the aircraft per year then more efficient procedures will be developed.

The degree of efficiency the company expects to achieve is illustrated by a few key performance figures. The Airlander is expected to be able to stay airborne for up to five days with a cruising speed of 148km per hour (80 knots) and a maximum payload capacity of 10,000kg (22,050 lbs). The actual propulsion resources will be four 350hp, 4-litre direct injection turbocharged diesel engines.

“It’s not much different from inflating a bicycle or car tire,” he says. “We do it slowly and ensure the hull material is laid out so we can visually inspect it as it is inflated.” The helium inflation, he says, is an integral part of the process and also is a one-time operation. “Think of it,” he says, “as a wing with helium to make it lighter and therefore more efficient.”