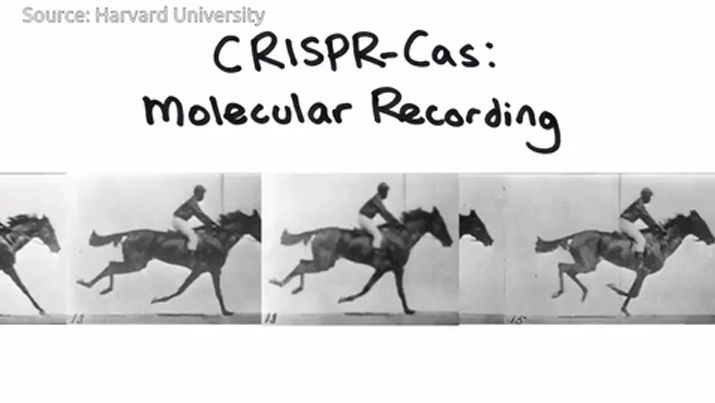 A report written by Shipman along with three Harvard colleagues describes proof-of-concept for a futuristic "molecular ticker tape,” a demonstration of the ability to record sequential events at the molecular level. In their scheme, cells could be induced to record molecular events into their own genomes, such as changes in gene expression over time. By sequencing those genomes, the information could subsequently be retrieved.

For now, the demonstration rested on recording a primitive movie -- specifically, the sequence of motion-capture photos shot in 1878 by Edward Muybridge of a race horse running. The footage is considered the first film ever made. Using the cutting-edge gene editing technology CRISPR, the scientists were able to encode five frames from the photo sequence into the DNA of living cells, and play them back like a motion picture.

CRISPR (short for “clustered regularly interspaced short palindromic repeats”) is a bacterial immune system against viral infections; it works by cutting out and storing part of an attacking virus’ DNA into a bacterium’s genome. The bacterium can then use the stored DNA to recognize and defend against future viral attacks.

The researchers had previously shown that they could use CRISPR to store DNA sequences in bacteria. For their more recent study, they sequentially treated bacteria with DNA encoded with the race horse photo sequence – and afterward were able to sequence the bacterial DNA and reconstruct the movie with 90 percent accuracy.

The team ultimately hopes to use the technology to study the brain. “We want to use neurons to record a molecular history of the brain through development," said Shipman. "Such a molecular recorder will allow us to eventually collect data from every cell in the brain at once, without the need to gain access, to observe the cells directly, or disrupt the system to extract genetic material or proteins."