Which Star Trek Technologies are in Our Future?

The original Star Trek series aired from September 1966 to June 1969. A little over a year after the last Star Trek episode aired, Neil Armstrong became the first person to walk on the moon as part of NASA’s Apollo 11 mission. Was this coincidence?

Yes, that definitely was a coincidence. What is remarkable is that for a whole generation of baby-boomer engineers and scientists, Star Trek and the Apollo missions are mentioned with similar frequency as the major reason they chose their field. It’s staggering to think that a fictional show could have as much of an influence as one of the greatest technical feats of mankind, but whereas the Apollo 11 missions were limited by existing technology, Star Trek was limited only by Gene Roddenberry’s imagination, and perhaps William Shatner’s method acting. Thus maybe we shouldn’t be surprised that Star Trek had such an outsized influence on a young and up-and-coming generation of scientists.

As a generation of scientists and engineers approach retirement, it’s a worthwhile exercise to see just how much of Star Trek’s technology has come into being, and how much is still beyond our reach. Let’s look at three Star Trek technologies: the Transporter, Phaser and Warp Drive.

On Star Trek, a transporter is a device that converts an object or person into an energy pattern that could then be “beamed” to a target like a ship’s transporter pad or a planet’s surface. As of today we don’t have transporters as described above, but progress has been made in quantum teleportation. Just recently Chinese researchers were able to teleport photons from Earth to a satellite in orbit 500 kilometers above. 1

The satellite, named Micius, is a sensitive photon receiver that can detect single photon states from Earth. The ground station sending the photons to the satellite is located in Ngari, Tibet. At 4000 meters above sea level, the Chinese researchers were able to minimize atmospheric effects that might disrupt the quantum entanglement needed for teleportation. The experiment involved the creation of entangled pairs of photons at a rate of 4,000 per second, half of which were beamed at the satellite and half of which remained at the ground research station. Conducted over a month, millions of photons were sent to orbit with almost a thousand successfully teleported with their entanglement intact. Obviously a single photon is nothing compared to say, an apple or human being, still who knows what could be possible in another 50 years. Phasers on Star Trek are versatile pulsed energy projectile weapons that range in size from handheld to ship mounted. Essentially an evolution of the “ray gun” of the 1950s and early 60s, the Phaser could be adjusted to incapacitate a target or, if turned to its highest setting, disintegrate it. There has been a lot of progress in recent years in laser weapons, both in incapacitating a target or in destroying it.

Last month the U.S. Army and Special Operation Command conducted several successful tests on high-intensity directed energy laser weapons at White Sands Missile Range test ground in New Mexico. The laser weapons, mounted on Apache helicopters, destroyed unmanned targets at various attitudes, flight speeds and maneuvers.2 Since 2014 the U.S. Navy has included a 30-kilowatt laser weapon system on the USS Ponce. The system uses an infrared beam from a solid-state laser array to destroy targets. The laser is powerful and accurate enough to target and detonate explosive rockets on board an enemy ship.3

Non-lethal laser weapons are being tested and used as well for over a decade now. The “Dazzler” uses intense directed radiation to temporarily disable its target, which can be a sensor or human vision. The Dazzler uses infrared against sensors and visible light against humans. Most Dazzlers are portable, using a weak laser diode or diode-pumped solid state laser as an emitter, and are designed to do no permanent damage to eyes or sensors besides flash blindness. As far back as 2006 the U.S. military mounted Dazzlers on M-4 rifles for troops in Iraq.4

Star Trek was a show about exploring space. Unfortunately space is a big place and relativity restricts a space ship’s top speed to the speed of light. Although incredibly fast, such a speed limit has major consequences for space travel. Had the Starship Enterprise been limited to sub-light speed, it would have spent most of its 5 year mission on its way to our closest star, Proxima Centauri. Luckily Gene Roddenberry had a solution: the warp drive. The warp drive used deuterium and antimatter as fuel. The two materials annihilated each other in a reaction mediated by dilithium crystals. The powerful reaction warped space-time allowing for faster-than-light travel. Certainly no technology has been found to date that can warp space-time as described above. As of today it isn’t even theoretically possible to exceed the speed of light. However it is interesting to note aspects of the warp drive described above have been created.

For instance, scientists have created, isolated and studied antimatter. Last year scientists studying antihydrogen found that its spectrum was the same as hydrogens. Studying the properties of antimatter is useful because we haven’t figured out yet where all the antimatter is in the universe. According to the standard model, there should be equal amounts of matter and antimatter in the universe. By studying antimatter scientists can look for asymmetries that might explain the discrepancy. The added benefit is fuel for a starship, in Roddenberry’s universe at least. 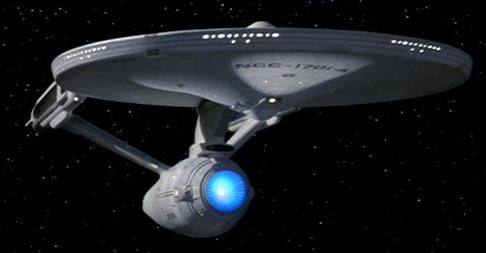 Image Credit: WikipediaIn our universe it doesn’t seem likely we will figure out how to exceed the speed of light anytime soon. However, there is hope that perhaps we could build an engine that could accelerate long enough to approach the speed of light, making our closest neighboring stars reachable within our lifetimes. One curious drive that has emerged is the RF resonant cavity thruster, better known as the EmDrive.6

The electromagnetic thruster, first proposed by Roger Shawyer in 2001, seems to violate conservation of momentum and as a result was dismissed by the scientific community for almost 15 years. However, independent experiments by NASA7 as well as German and Chinese researchers have all measured a small thrust. This is important because if an EmDrive truly creates reactionless thrust, there would be no need to include propellant in a spaceship with the drive. Propellant makes a spaceship heavy and hard to accelerate. An EmDrive-powered spaceship would be light and could experience significant constant acceleration for long periods of time if powered by a nuclear fission or fusion reactor. The result would be spaceships able to accelerate to close to the speed of light, which would bring our corner of the galaxy within reach.

The past fifty years have seen tremendous strides in engineering and science. Certainly Star Trek technology, as dreamt up by Gene Roddenberry, was plausible enough then to remind us of existing technologies today. This article doesn't even mention talking computers, handheld scanners (tricorders), cell phone-like communicators, genetic manipulation, etc., all of which can be found (in a similar form) in our world today.

Instead it focuses on the more far-out technologies that, as it turns out, aren’t as far-out as they used to be. It’s remarkable to think such seemingly magical technologies have a foothold in science today. Really only the warp drive seems beyond our grasp at our current time, but perhaps that is just because we haven’t developed the theory yet to make that plausible. Technology has made amazing strides in the 50 years since Star Trek was on the air, but perhaps it’s less surprising considering the influence baby-boomer scientists and engineers say Star Trek had on them.

By posting a comment you confirm that you have read and accept our Posting Rules and Terms of Use.
Advertisement
RELATED ARTICLES
Space Weapons Versus Firearms: Can You Fire a Gun in Space?
Breakthrough Technique for Building Optical Metamaterials
Not Yet the Holodeck, But Holography Is Coming to Engineering
Alexa, take me to the Moon
The Ashes of 100 People Set to Launch into Space
Advertisement