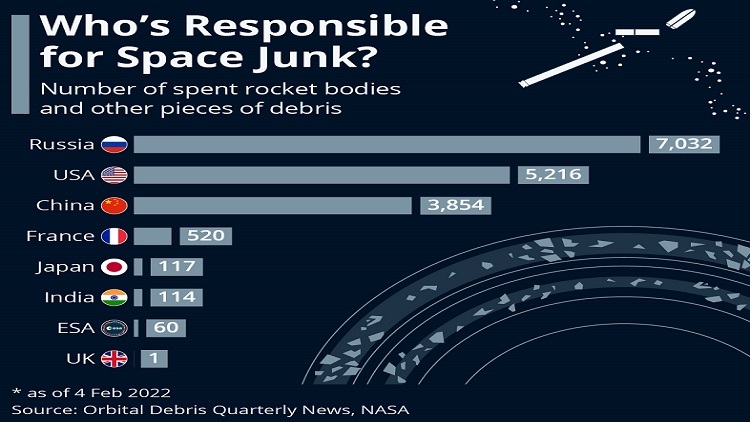 Currently, thousands of pieces of debris from defunct satellites, rocket boosters and weapons tests are orbiting Earth. This cosmic clutter poses threats to satellite systems crucial for communications and environmental monitoring, and releases chemicals detrimental to the ozone layer as well as future launches.

According to the chart based on data from the NASA Orbital Debris Program, Russia, the U.S. and China are the biggest contributors of space junk. Last November, Russia blew up one of its old satellites using an anti-satellite (ASAT) weapon, sending thousands of pieces of debris into orbit and risked hitting the International Space Station. The Secure World Foundation estimates at least 16 debris-creating ASAT weapons tests have been carried out to date, with the most potentially damaging carried out by China in 2007, as the country downed one of their own satellites and generated an estimated 3,000 pieces of debris. The U.S., the creator of the first ASAT test in the 1950s, has conducted at least three ASAT debris-creating tests.

Efforts to address this space litter are ramping up, as the removal of such debris is key to sustainability in space and to reducing the risk of obsolete spacecraft colliding with new and existing satellites. In November 2021, a Chinese military satellite designed to mitigate space debris launched into space via a Long March 3B rocket from the Xichang Satellite Launch Center in southwest China.

[Learn more about satellite technologies and manufacturers on GlobalSpec.com]

Japan-based Astroscale has validated its magnetic capture system designed to tackle the problem of space debris. Its End-of-Life Services by Astroscale-demonstration (ELSA-d) servicer satellite showcased in this video has successfully captured a simulated piece of space junk in orbit. ELSA-d has been in orbit since March 2021 at an altitude of about 550 km and has completed a commissioning phase during which its systems were tested and certified. The most recent phase confirmed the ability to repeatedly capture another satellite.

A solution based on quantum-inspired computing and artificial intelligence to address the efficient removal of space debris is showcased in this next video. This project aims to improve mission planning so that a single spacecraft can efficiently select which pieces of space debris to remove in one mission, and at a faster rate than is currently possible.

The environmental protections accorded terrestrial ecosystems must also be applied to the orbital space around the Earth. Space is an important environment to preserve on behalf of professional astronomers, amateur stargazers and Indigenous peoples, according to an international group of researchers. The team advocating for space environmentalism, which includes participants from the European Space Agency (Netherlands), Center for Astrophysics — Harvard and Smithsonian, Smith College (Massachusetts), University of Regina (Canada), University of Manchester (U.K.), SKA Observatory (U.K.), University of British Columbia (Canada), University of Texas at Austin, University of Washington and University of Edinburgh (U.K.), urges policy makers to work collaboratively to create a shared, ethical and sustainable approach to space.

By posting a comment you confirm that you have read and accept our Posting Rules and Terms of Use.
Advertisement
RELATED ARTICLES
The need to extend environmental protection to orbital space
Watch the RemoveDEBRIS Satellite Net Simulated Space Junk
Video: Removing Derelict Satellites and Other Space Debris
Watch a harpoon skewer space debris
Watch how quantum computing technology can target space debris cleanup
Advertisement