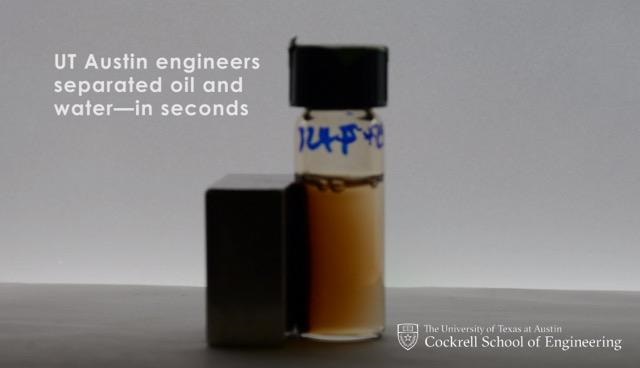 “They’re like oil and water,” goes the saying, “they don’t mix.”

That’s true to a point; if you try to put the two together, you find that oil floats to the top because it’s less dense than water. The water molecules are also more strongly attracted to each other than they are to oil molecules.

And yet, trying to clean up after oil spills into water is no easy task; it can be challenging, expensive and environmentally risky. As recently published in the Journal of Nanoparticle Research, however, researchers at the University of Texas at Austin’s Cockrell School of Engineering may have developed a better method.

The researchers used magnetic nanoparticles to separate oil from water through a simple process relying on electrostatic force and a magnet. The new technique has implications not only for efficient clean-up of oil spills, but also for lessening the environmental footprint of oil production, treating the millions of gallons of fresh water used in hydraulic fracturing, and possibly even removing lead from drinking water.

Modern oil production methods separate out 95 percent of the oil from produced water – but leave behind small droplets that are difficult to extract. Those small droplets, however, can attach to nanoparticles to be much more easily separated.

"This new technique is really aimed at removing that little bit of oil in that water that needs to be removed before you can consider it treated," said Saebom Ko, a research associate in the Department of Petroleum and Geosystems Engineering and lead author for the study.

"It's a simple idea," adds petroleum and geosystems engineering professor Hugh Daigle, a member of Ko’s research team. "We are leveraging the magnetic properties of these nanoparticles to get them to stick to the oil droplets and essentially magnetize the oil droplets so they can be pulled out with a magnet."

The researchers borrowed a technique known as high-gradient magnetic separation that is used in mining to remove metals, and in the food industry to remove toxic particles. By coating the magnetic nanoparticles with polymers with a positive surface charge, they were able to get negatively-charged oil droplets to latch on through electrostatic attractive force – similar to the way a dust-trapping cloth works. The process also works in reverse – negatively-charged polymers can be used as a coating to attract substances with positive surface charges.

Daigle notes that applications can extend far beyond the oil field. “With an appropriate surface coating design, you can take your magnetic core and coat it with whatever chemical you choose on the outside to stick to the target and pull it out with a magnet,” he said.

While hazardous waste can be produced by regeneration methods that use chemicals to extract the oil, Ko is developing a chemical-free regeneration process to reuse nanoparticles. “We believe that by recycling and reusing nanoparticles, it could not only reduce operational costs, but it could be an environmentally friendly process that reduces hazardous waste," he said.