In the most literal sense, the term hydroponic can be translated to mean “water working,” from the Greek words hydro (water) and ponos (labor). Hydroponics uses water supplemented with nutrients to provide plants’ roots exactly what they need, when they need it. It is the art of growing plants without soil and, in many cases in an aquatic environment, as its name suggests.

What this means is that we can grow plants pretty much whenever we want, wherever we want.

While the most common type of hydroponic gardening is the nutrient film technique (N.F.T.), there are a variety of sub-systems and equipment used in this form of gardening. For example, aeroponics is considered a high-tech method of hydroponic growing. In this method, roots hang in the air and are misted with a nutrient solution that is released by pumps that operate on timers.

Hydroponics is the predominant subset of vertical farming, the practice of producing food and medicine in vertically stacked layers, vertically inclined surfaces or integrated in other structures. Just last month, Allied Market Research published a report stating that the vertical farming market is projected to reach $6.4 billion by 2023, up from a valued $1.5 billion in 2016. Contributing factors include population and urbanization increases worldwide, as well as the need for food and food security.

Traditional farming, an ancient food-production method, can actually be a difficult task when it comes to finding fertile land and producing enough volume to feed the masses.

Vertical farming methods like hydroponics have gained popularity in recent years and are proving to be bountiful substitutes, yielding more crops, without the use of land or pesticides.

Advances in LED technology are helping to create an environment where vegetables can be produced at scale for maximum impact, according to GE Reports. (Source: GE Reports)

In addition to efficiency, hydroponics also fits quite nicely with the organic foods trend.

“As local, fresh food demand increases and the research into hydroponics increases, facilities will be able to continue to produce quality product at faster rates. We see a movement towards more urban farms, horticulture research programs in child education schools and community centers. We believe when hydroponics becomes more mainstream, this will allow for students to become increasingly interested in its science which strongly entails chemistry, environmental impact, economics and fluid dynamics,” says Adam Chalasinski, Water Applications Engineer, Rough Brothers, a builder of custom greenhouses and conservatories for various industries.

When it comes to hydroponics, there are a plethora of advantages, but on a large scale, setting up a vertical farm (along with all of the required technologies) can cost a pretty penny. Another downfall to the method is that not all crops can be grown in this way.

However, as environmental factors become more prevalent, market growth can still be expected. For example, Asia-Pacific has heightened engagement with this method of food production and has seen many government initiatives and assistance from private companies that are working toward it as well, as a result of severe droughts and other environmental factors that will hinder natural crop production down the line.

When it comes to equipment for hydroponic farming, set-ups can include HVAC, LED lighting, communication technology, sensors, irrigation systems and control systems.

Lighting is the most essential component to these farms since it enables plants to grow by acting as natural sunlight. The lighting systems provide photosynthetic wavelengths which maximize crop yield with minimum power consumption. This is one reason why farmers tend to opt for LED lighting systems over other lighting technology for hydroponic farming.

In keeping with our current automation craze, there are also automated hydroponic systems out there that grow microgreens. These systems are even being used as cost-effective way for farmer to grow fodder for their livestock. 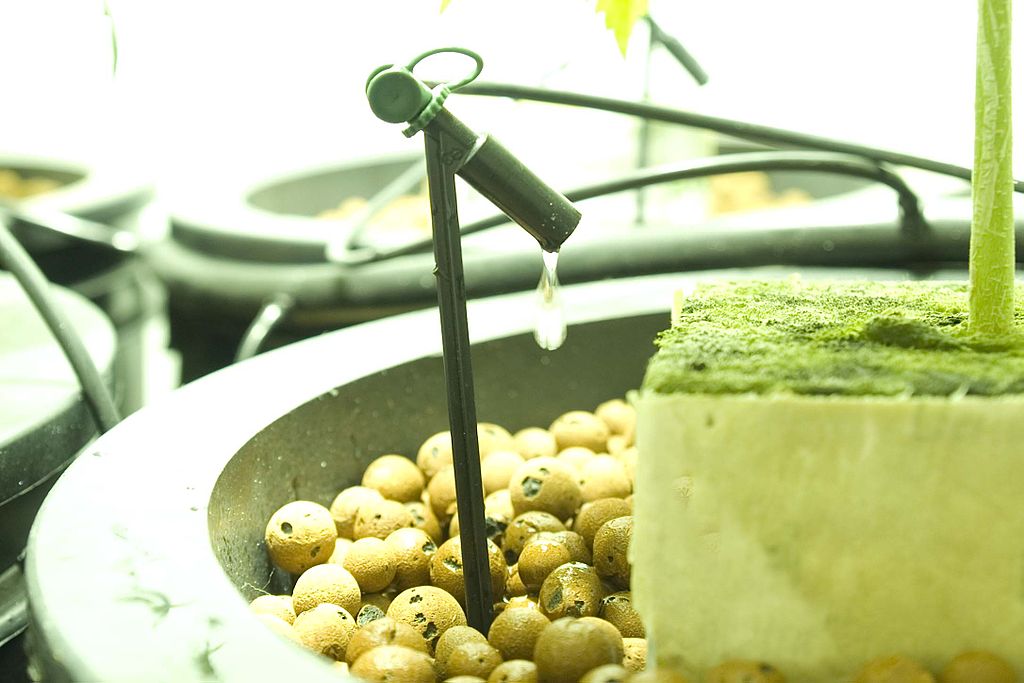 Drip emitter on a rockwool and expand clay hydroponic setup.

Hydroponic gardening growth processes aren’t new, but the way in which it is carried out and tweaked for efficiency is and methods are continuing to evolve and improve.

“What has changed is modern technologies and human’s ability to integrate specific nutrients, sensors, pumps and water filtration systems to enable plants to speed up photosynthesis and in turn, healthy growth,” says Chalasinski. “Currently many growers and hydroponic systems providers are in the research and development phase of hydroponic systems. We do not see the R&D phase ending anytime soon, especially with the range of climates and species.”

According to the water applications engineer, there are proven hydroponic irrigation systems and recipes in use all around the world, even the International Space Station. There are also technologies being implemented to handle the 30 percent of runoff water that comes from these methods, such as sanitation systems that remove harmful bacterial from this water.

In the future we may see an increase in solar systems for hydroponic applications, and could even see fiber optic solutions implemented in the future. With major companies like General Electric and Toshiba jumping into the vertical farming game over the last few years, the future is wide open for the industry.

What is the point of the bouncing picture of the planting shelves? I was having a tough time reading the article without getting seasick.

If we are not to eventually morph back to the phosphorous limiting growth of primordial forests and plains, we must evolve to a cropping agriculture that keeps the root mass of harvested plants in a saturated environment that captures all applied phosphorous for growth of the plants, some portion of which can supplement gross system availability of phosphorous through recycling of harvested plant mass. Otherwise, more energy will be expended with each generation for the extraction of less and less convenient phosphorous ore sources (i. e., shaft mines, drilling, sea water extraction)