Researchers at the U.S. Naval Research Laboratory (NRL), Vehicle Research Section and Photovoltaic Section and the U.S. Marine Corps' Expeditionary Energy Office want to improve the ability of unmanned platforms to support a 24-7 information, surveillance, and reconnaissance (ISR) mission. Such capability will reduce the amount of batteries or fuel that must be carried into battle, and improve the availability of continuous coverage of ISR assets.

NRL is combining autonomous soaring algorithms and solar photovoltaics to enable long endurance flights of unmanned sailplanes that use solar power. A custom-built photovoltaic array is integrated into the center wing panel of the PV-SBXC aircraft as a drop-in replacement to the original wing. A power management and distribution system converts the power from the solar arrays into direct current (DC) voltage, which the electric motor can use for propulsion, or recharge a ‘smart battery.’

An autonomous soaring software algorithm that would typically monitor local vertical winds commands the aircraft to orbit in any nearby updrafts, very similar to soaring birds. However, the algorithm was disabled for the two solar flights in order to assess the solar-only performance. Passive soaring — meaning no specific maneuvers are attempted to catch thermals — was still allowed, to let the aircraft turn the motor off if altitude increased because of an updraft along the aircraft’s pre-defined flight path. 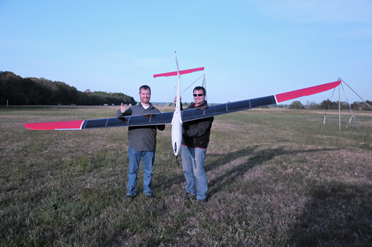 The UAV with solar arrays built at NRL using SunPower Inc. solar cells flew for 10 hours, 50 minutes on October 14, 2016. Takeoff occurred at 7:20 a.m. at 95 percent battery state of charge and landing occurred at 6:10 p.m. with the battery at 10 percent state of charge. Thermal activity was very good in the middle of the day and 40 percent of the flight was spent with the motor off. The solar array partly recharged the battery while the motor was off.

Another UAV equipped with solar wings and PV arrays from Alta Devices, Inc. flew for 11 hours, 2 minutes on April 19, 2017. Takeoff occurred at 7:46 a.m., approximately an hour after sunrise, with the battery's state of charge at 90 percent. Landing occurred at 6:48 p.m., approximately an hour before sunset, with the battery's state of charge at 26 percent. Thermal activity was very weak and almost all of the flight was spent running the motor. Near solar noon, the solar array provided sufficient power to cruise on solar power alone.

By posting a comment you confirm that you have read and accept our Posting Rules and Terms of Use.
Re: Military UAVs Soar on Solar Power
#1

I believe you should spell out what UAV stands for as long as you are spelling out every other acronym used in the article and UAV is what it is all about. Otherwise this was an informative article.