How Do Ball Valves Work?

Ball valves are quarter-turn, straight-through valves that have a round closure element with matching rounded seats that permit uniform sealing stress. The valve gets its name from the ball that rotates to open and close the valve. Ball valves are used in situations where tight shut-off is required. They are wide duty valves, able to transfer gases, liquids and liquids with suspended solids (slurries). Ball valves are commonly found in flowing systems on ships, fire safe protection services and chlorine manufacturers. They are not recommended for use in pharmaceutical, bioprocessing, or food and beverage applications because they cannot be cleaned easily. Exceptions can be made for chemical or non-sterile applications.

Ball valve disc. Image credit: valve-tech.blogspot.comThe closure element of a ball valve consists of a ball shaped disc. The valve is opened by a quarter turn of the actuator. The turn lines the hole in the ball parallel to the flow so the media is able to pass through the valve. When the valve is closed the ball is rotated so the hole is perpendicular to the flow, blocking the media.

Ball valves are best used for fast-acting stop/start applications. They are considered quick-acting because they only require a 90° turn of the handle to operate the valve. The quarter turn minimizes valve operation time and decreases the possibility of leakage due to wear.

Ball valves can be used for throttling service if a high level of accuracy is not required. Throttling causes the partially exposed seat to erode because of the high velocity flow and pressure. The wear will eventually lead to valve leakage. Leakage can be corrected if the manual ball valve is automated and is able to move faster in response to a changing position signal.

Ball valves are very efficient with gas and liquid media. This type of valve can be used for challenging chemicals such as dry chlorine, hydrofluoric acid or hydrochloric acid, and oxygen. Slurry transport is not highly recommended because the slurry tends to solidify in the cavities around the ball and seats. This increases the operating torque and may break the valve. Most manufacturers recommend not exceeding 3% trace solids in the media.

Ball valves are available in a floating ball design and trunnion mounted design. The type denotes how the ball is fitted into the valve. Types can further be broken down into body styles and configurations.

Floating ball- The floating ball design is the most common type of ball valve. In this type, the ball is not fixed to the stem so a wide range of freedom is available. The upstream pressure helps create the seal by pushing the ball back against the rear or downstream seat.

Trunnion valves- The trunnion ball valve design has a pin securing the ball so it doesn't dislodge. This design can be used for high velocity systems. Trunnion valves use a special segmented ball. The valve supports the ball with a shaft and the side opposite the shaft using another shaft or post. The shaft can be part of the ball or separate. Trunnion valves provide less friction between the ball and seal.

Essentially a ball valve is composed of an outer shell, a ball with a hole in it, and an actuator such as a handle.

Ball valves are available in a variety of body styles, including reduced bore, full bore and V-notch. Each of these ball valve forms offers specific advantages depending upon the requirements of the given application. The body consists of several parts of the valve including the bonnet and trim. Ball valves can come in a variety of styles to ensure proper function in the system.

Full port valves have a ball with a bore equal to the inside diameter of the pipe. The advantage to this design is they minimize the pressure drop across the valve and keep the flow from being restricted as it flows. They can be used for throttling applications.

V-notch control valve bodies have a similar construction to standard ball valves. The difference lies in the contoured V-notch in the ball, which produces an equal-percentage flow characteristic. They have good rangeability, control, and shut off capability for use in the paper industry, chemical plants and power industry. The ball remains in contact with the seal during rotation and produces a shearing effect as the ball closes to minimize clogging.

Reduced port and full port valves are considered recovery valves. Recovery valves can be used in systems with a low pressure drop and high flow coefficient. Ball valve bodies can also come in three configurations depending on the installation and maintenance requirements of the system. The type of seal and seat can vary with the valve pressure rating and materials of construction. Some valve seats are composed of single molded forms, while other seats with higher-pressure ratings often incorporate a trunnion design where each face of the ball is separately sealed. Pre-stressed seats are made during assembly and apply pressure against a trunnion mounted ball. A floating seal allows two full-contact seals to be placed on both the inlet and outlet ports. The ball is supported by the seals but does not come into contact with the body. A floating seal is best used for rigorous, heavy duty service since they seal the flow and support the ball. Ball valves do not require lubrication.

The stem is not fastened to the ball; it normally has a rectangular end which fits into a slot cut into the ball. This allows the ball to rotate as the stem is turned. The stem is constructed of packing rings to seal it and packing follower and gland flange to apply pressure. For two or three piece bodies and solid bodies with side entry, the stem is generally installed through the body and packaging installed above the body.

Most ball valves are manually operated but they can be configured for automation. Ball valves are generally fast acting devices because they only require a quarter turn to open or close the valve.

Similarly, valves are designed using a wide variety of materials, as required by their application. Common ball valve materials include brass, bronze, copper, cast iron, ductile iron, stainless and other steel types, metal alloys and plastics including PVC and CPVC. It is best to consult with the manufacturer for the specific properties of the materials used in the valve, and how this relates to the applications that include type, concentration and temperature of the media being handled.

Balls are usually metallic bodies. The trim (seats) is usually an elastomeric material or plastic. The resilient seats for ball valves are made from various elastomeric materials including Teflon® (TFE), Nylon, Buna-N, Neoprene, and combinations of materials. When selecting a material for the seat, consider the type and temperature of the media the valve will be handling. Many elastomer materials cannot be used in high temperature or corrosive material.

It is important to accurately calculate the correct performance requirements for the valve in the system in which it will be used.

A ball valve can be used to stop and start as well as throttle or regulate the flow or movement of media through a system. The shape of the valve determines how many directions of flow the valve will have. The number of ports can range from one to four. The ports of the ball can be shaped like a T or L.

The T-shape allows flow in two directions at once or one direction with the other side closed.

The L-shape only allows flow in one direction at a time. An L-shaped port is used as a diverter valve. The center port can be controlled to direct flow to either side of the valve, but cannot provide flow to both sides simultaneously. The smooth surface of the ball allows for a tight seal in the valve. 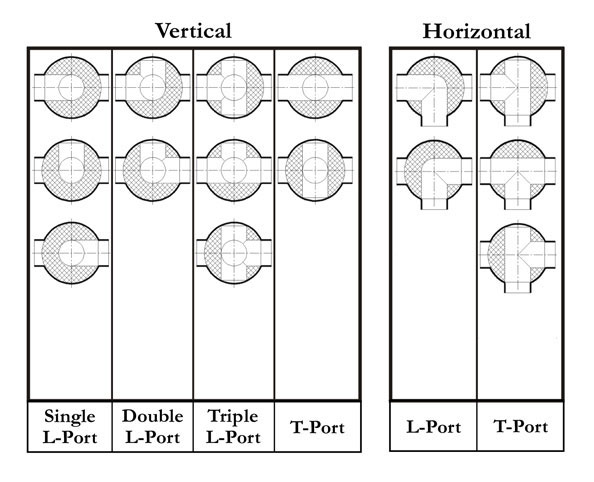 The science behind valve sizing is determining the flow through the diameter of the valve. Valves may contain two different sized openings designed to take a pressure drop. This is why valve sizing is almost always done for throttling valves.

By posting a comment you confirm that you have read and accept our Posting Rules and Terms of Use.
Advertisement
RELATED ARTICLES
Characterized and V-Ball Valves Provide Improved Flow Control
Is a Metal-seated Ball Valve for You?
The Fisher Vee-Ball valve: Combining globe valve ruggedness with rotary valve efficiency
How to Select the Right Valve for Your Application
Check valves — a tutorial
Advertisement