An obvious key to these interactions is an effective and reliable means for establishing a connection between an electrode and the neural tissue.

A research team at the University of Delaware looked into the possibility of using a conjugated polymer known as PEDOT — poly (3,4-ethylene dioxytheopine). 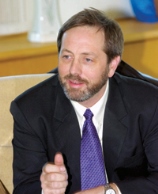 David Martin, University of DelawarePEDOT has been widely used in applications such as energy conversion and storage, organic light emitting diodes (OLEDs), electrochemical transistors, and sensors. The problem is that conjugated polymers have low mechanical stability and relatively limited adhesion on solid substrates. This can limit the lifetime and performance of the devices and cause mechanical failure that might leave behind undesirable residue in the tissue.

The Delaware team has developed a method of electrografting that enhances the adhesion. It is a process in which organic molecules are electrochemically oxidized or reduced, followed by the formation of a high quality electrically conductive metal-organic bond at the substrate-polymer interface.

Not only is the adhesion effective with this technique, but the process takes just minutes, whereas similar approaches require multiple steps. It is also effective with a variety of substrate materials including gold, platinum, glassy carbon, stainless steel, nickel, silicon and metal oxides.

"Our results suggest that this is an effective means to selectively modify microelectrodes with highly adherent and highly conductive polymer coatings as direct neural interfaces," says Martin.

By posting a comment you confirm that you have read and accept our Posting Rules and Terms of Use.
Advertisement
RELATED ARTICLES
Next-Generation Polymer for Automotive Applications
Biocompatible Agents for Soft Tissue Adhesion
Ice Is No Match for This New Coating
Coating formulated to protect national monuments, historical structures
Dehydration Method is a Cheap and Eco-Friendly Production Method for Conjugated Polymers
Advertisement