Polymer coatings like Teflon are an established technology, and generally adhere well to many types of products. Yet the way that the coatings are applied and cured can limit their utility in some applications.

A Boston-based company has developed a method to allow commercially available polymers to more efficiently coat many types of products, including tire molds and electronic circuit boards. GVD Corp. has received funding from an interesting mix of government agencies, including the U.S. Environmental Protection Agency (EPA) and the Departments of Defense and Health and Human Services.

The traditional approach to polymer application involves mixing it with a solvent (which acts as a dispersing agent) and then spraying or dipping it onto an item. The now-wet item must be cured using ultraviolet light or baked at a high temperature [more than 700 degrees Fahrenheit with polytetrafluoroethylene (PTFE or Teflon)], according to Hilton Pryce Lewis, CEO. 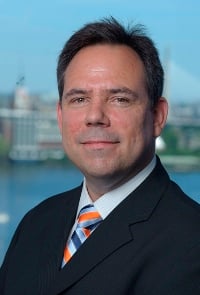 Hilton Pryce Lewis, CTOThis process, called “spray-and-bake” by Lewis, “is a crude, inefficient process that tends to produce thick, non-conformal coatings.” The necessity of a high-heat curing step limits the items that can be coated. “So, on the one hand you have a highly controlled chemical reaction to produce an exquisitely well-defined bulk material, but then you apply it as a coating using pretty crude methods.”

Solvents are a good-news, bad-news part of the polymer equation. While they allow polymers to be dispersed in a solution for application, it’s difficult for the polymer to disperse evenly enough to coat a tire mold, for example, or any other product with fine features.

Additional issues include chemical damage to the item itself or the underlying layers of coating and the environmental impacts of usage, including product disposal and exposure to workers who are applying it. Pryce Lewis analogized poorly dispersed polymers to lumpy oatmeal, as some parts may receive too much coating while others don’t get enough.

To overcome the negative effects of solvents, GVD created a “dry” process for applying polymers. “It gets you away from the effects of surface tension, where you get pooling in corners and potential damage to very sensitive parts as the solvent dries,” says Pryce Lewis.

A New Way to Deposit Polymers 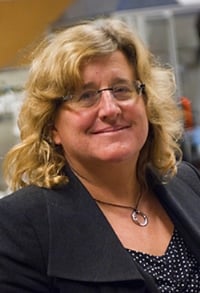 Karen Gleason, CEOGVD calls its polymer deposition process iCVD (Initiated Chemical Vapor Deposition), which was developed by Karen Gleason, an associate provost at the Massachusetts Institute of Technology as well as a founder and chief scientific advisor for GVD. The premise of iCVD was to combine the advances in our understanding of polymer chemistry with the advances in deposition processes that have occurred over the last several decades, says Pryce Lewis. “To take polymer chemistry into the gas phase, as it were,” he says.

Unlike with the traditional coating process, iCVD allows GVD to make the polymer directly on the surface of the part that needs to be coated. “In our process, you’re starting with a monomer, not a polymer, and creating conditions that allow the polymerization reaction to occur when you want it, where you want it,” he says. That’s the ‘C’ part of iCVD – chemical vapor deposition. “The result is much greater versatility in the chemistry of the resulting coatings, the range of parts that can be coated and the breadth of new applications that can be enabled.”

When tire manufactures need to release vulcanized (cured) tires from molds, they either use force to remove them or apply a release agent. Pryce Lewis says that tire companies generally don’t use release agents, and the forced removal method can cause tires to deform, affecting performance. 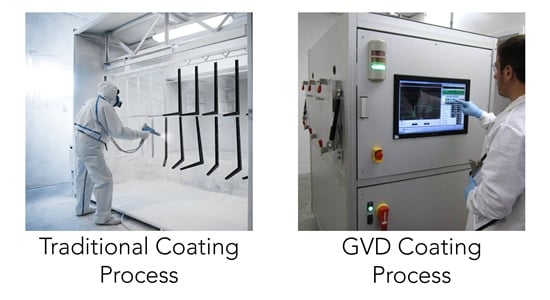 Chemical vapor deposition can allow greater versatility in the chemistry of the resulting coatings. Image source: GVD Corp.Release agents come in two forms, a spray release agent and a semi-permanent release coating. The spray release agent is sprayed on the mold and lasts for one to two days, according to Pryce Lewis. The permanent release coating, usually Teflon or an equivalent, is applied using a solvent process and can last weeks or even months.

A process engineer at a U.S. tire manufacturer, who spoke off the record because his company is evaluating GVD coatings, says the commercially available mold lubricant sprays his company used had to be reapplied about every 10 to 12 tires. By contrast, GVD’s coatings lasted for months, the source says.

GVD’s polymer coatings are 10-25% more expensive than traditional coatings, according to Pryce Lewis.

GVD’s RapidRelease product works much the same as the permanent release coatings in terms of durability and method of application, says Pryce Lewis, but offers advantages over the traditional spray-and-bake method, including “excellent adhesion, uniformity and thinness.” It does not affect the finish of the tire (glossy/matte) throughout the life of the coating, and it can be applied to both used and new molds with ease, Pryce Lewis says.

RapidRelease is thin and non-stick so it keeps the integrity of fine features and doesn’t block mold air vents. The ease of release results in less scrap and higher quality tires. The coatings don’t require high-temperature curing, a process “which can deform metal features and puts a lot of stress on the molds,” Pryce Lewis says.

Tire molds must be sent to GVD for coating using their application process. This potential disadvantage is not a deal breaker for the process engineer who was interviewed, however, because so far the product performs well and lasts for a long time.

“Permanent coatings and molds haven’t taken off because all of the permanent coatings out there – besides this one – would tend to take the textured surface and make it smooth,” says the process engineer.

Increasingly complex tire designs could lead to more demand for RapidRelease type polymers. “Treads have a lot more siping, they have serrated siping and they have 3D siping,” the process engineer says. In some cases, these designs make it difficult to strip or remove the tire from the mold.

GVD is extending its reach into other industries, including electronics systems. The company collaborated with the Department of Defense to develop an environmental protection coating that can replace hermetic packaging for high-frequency electronics.

Air- and watertight hermetic packages protect a device from the environment. “As you can imagine, they are bulky, heavy and expensive, and impede the drive towards more agile, cost-effective weapons systems,” Pryce Lewis says. To meet the requirements set by the Department of Defense, the defense industry is searching for an affordable technology with a smaller form factor, says Pryce Lewis.

Working with its commercial partners, GVD has shown that its technology can be integrated into systems to replace hermetic packaging, Pryce Lewis says. Indications are that it also can provide the same level of protection and performance at a lower cost and with less bulk.

By posting a comment you confirm that you have read and accept our Posting Rules and Terms of Use.
Advertisement
RELATED ARTICLES
Researchers report progress in tire recycling technology
Coating Technique Developed by Sweet Research Team
Polymer Packaging for Farms and Pharma
Specialty Casting Film: Major Inroads in Tire Technology
Scratching the surface of COVID-19 — The coating, film and other surface technologies to emerge from the pandemic
Advertisement